“I hope [people] feel joy when they see the vibrant colors,'' says organizer Tanya Rosen-Jones ’97. “I hope they feel pride in what a special place Oberlin is. I hope they realize there is a strong arts, sports, and music culture in this town.”

The idea of a vivid community mural appealed to Rosen-Jones’ artistic side and small-town appreciation. After graduating from Oberlin College with a major in history and concentration in Latin American Studies, she turned a passion for photography into a professional career in 1999. She returned to Oberlin in 2008 and opened a portrait studio in the downtown area.

With artists and community members lending a hand, and donated lemonade and water from local churches nearby, the August installation was completed in just two weeks. However,  groundwork for the We Are Oberlin Mural Project was two years in the making.

Location of the new mural was inspired by an existing installation that had been on the back of the Oberlin Bookstore since 1996. It depicted a sitting figure whose hands steadied a ball of light on top of its head. “I wondered about its origins,” says Rosen-Jones. “It was almost 25 years old and there was no graffiti on it. I wondered how it was still respected after so much time.”

Her inquiries led to former associate dean Brenda Grier-Miller, who held a Summer in the City camp in the 1990s that connected middle school students to local artists for hands-on learning experiences. During a 1996 mural painting class, students came up with the concept and installed the work with the help of Nanette Yannuzzi, professor of studio art, installation, sculpture, and book arts; and Imani Miller-Annibel ’03.

“I spoke with Brenda and her daughter, Imani. They were sad to see the mural go, but were excited about a new generation getting the opportunity to create something beautiful and inspirational in the space,” explains Rosen-Jones. “We compromised that any new design would include an homage to the original mural."

Rosen-Jones also received an education on the process of grant writing and discretionary funding by Darren Hamm, former director of the Oberlin Center for the Arts, which served as the project’s fiscal sponsor. She consulted with middle school art teachers about the artistic process. And a mural committee (made up of representatives from the college, conservatory, local artists, and community members) assisted with making edits and decisions about designs before they were submitted to the public.

“I wanted the mural to feel community-owned, so it involved three important steps,” explains Rosen-Jones. That included Oberlin High School student participation, a community-wide vote, and a Community Paint Day.

After receiving a grant from the Oberlin Schools Endowment Fund in 2019, Oberlin High School students were asked to express, “What Makes Oberlin Special?” during a three-day workshop and all-school assembly.

Although planning was halted because of the pandemic, community support grew once it was determined that the project could safely continue. Local groups and churches helped spread the word about Community Paint Day, and nearly 700 votes were cast to choose the design during an in-person vote at the Oberlin Public Library.

By early August a platform lift that stretched nearly 32 feet high was placed behind the Oberlin Bookstore on Carpenter Court. A sketch of the winning mural design that spans 27 feet was added to the building by professional mural artists Martha Ferrazza, Isaiah Williams, and Jared Mitchell. Days later, the artists, chosen by Rosen-Jones, filled in the shapes closest to the roofline with vibrant pops of color. The lower portions of the wall were brought to life with a Community Paint Day.

“Oberlin truly is a special place,” says Rosen-Jones, reflecting on the project after its completion. “[Oberlin] is small enough so that we celebrate our victories together and we suffer our losses together. It is the kind of place where you can make a positive difference in people’s lives.” 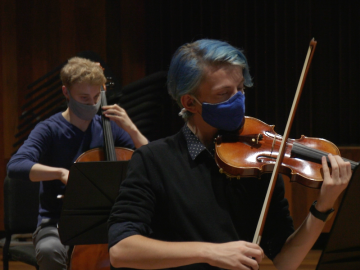 Eva Hesse: Oberlin Drawings, a catalogue of the artist’s works held by the Allen Memorial Art Museum at Oberlin College, has been selected by the New York Times as one of its Best Art Books of 2020. 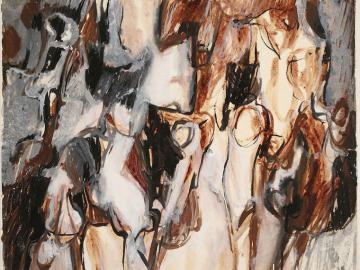