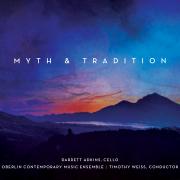 Oberlin Associate Professor of Cello Darrett Adkins ’91 has commissioned and been the dedicatee of many important new works for cello, including Jeffrey Mumford’s concerto, which Adkins premiered with the Cleveland Chamber Symphony.

On his new release for Oberlin Music, Myth & Tradition, he teams up with the Oberlin Contemporary Music Ensemble—under the direction of Timothy Weiss—for the world-premiere recording of another Adkins commission, Su Lian Tan’s Legends of Kintamani. Inspired by the composer’s travels to Southeast Asia, the five-movement story depicts a return to a more innocent time and place, where mythology and reality combine in fairy tales.

Also commissioned for Adkins is Philip Cashian’s Concerto for Cello and Strings, a showcase for Adkins’ virtuosity made up of a series of interconnecting and juxtaposing sections underpinned and echoed by the Contemporary Music Ensemble. Completing the collection is Richard Wernick’s Concerto for Cello and Ten Players, which was commissioned by the Twentieth Century Consort in 1979 and premiered two years later at the Hirshhorn Museum in Washington, D.C.

An avid chamber musician, Adkins performs and records in the United States and Europe with the Lions Gate Trio. Myth & Tradition is Adkins’ second release for Oberlin Music. It follows the 2013 recording Hypersuite 2, which features music by Bach interwoven with solo works by contemporary composers.

Distributed by Naxos of America, Myth & Tradition is available through select retailers and digital music channels worldwide. Oberlin Music is the official label of the Oberlin Conservatory of Music.