Oberlin sponsors approximately 500 concerts on campus each year. This includes recitals and concerts by the more than 25 student ensembles, and performances and master classes by guest artists. Faculty members perform on campus and throughout the world. Oberlin’s Artist Recital Series features concerts presented by a range of highly acclaimed artists.

Vocal and instrumental, solo and ensemble, students, faculty, and professionals represent the spectrum of music offerings that enrich life on campus and in the community. From baroque to contemporary guitar, classical to popular, computer-generated to acoustic, and from time-tested compositions to newer works, the college and conservatory present shows and performers to satisfy any musical interest.

The conservatory has several active student ensembles and faculty-led performance groups. Many are well established; others represent innovations in music and musical collaborations.

If you don’t see a group or ensemble of interest to you, considering making your own music. Oberlin offers many opportunities and different venues in which to practice and perform.

To find out who’s performing on campus and in the community, check the events calendar. 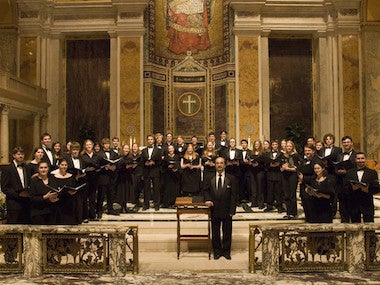 The Collegium Musicum specializes in medieval, Renaissance, and early music. Founded in the early 1960s, the group has been led by Director of Musicology Steven Plank, since 1990. The 40-voice student ensemble has performed Mass and motet settings by Byrd, Tallis, Fayrfax, Monteverdi, Victoria, Lasso, Schuetz, and Palestrina. The group performs frequently at the Cleveland Museum of Art and has also presented concerts in Washington, D.C., and at Kenyon College. 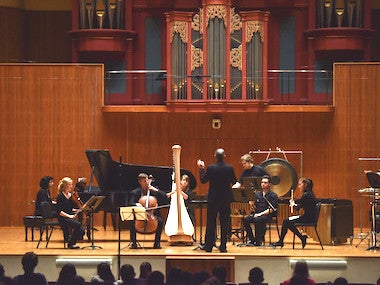 In its six annual full-concert cycles, Oberlin’s Contemporary Music Ensemble (CME), directed by Professor of Conducting Timothy Weiss, performs music of all contemporary styles and genres: from minimalism to serialism, to electronic, cross genre, mixed media, and beyond.

Each year, some of the most well-regarded contemporary music icons perform as soloists with CME, including Jennifer Koh ’97, Claire Chase ’01, David Bowlin ’00, Tony Arnold ’90, Marilyn Nonken, Stephen Drury, Steven Schick, and Ursula Oppens. Distinguished students regularly receive opportunities to perform as soloists with the ensemble as well, a luxury that is seldom afforded at other institutions.

The group is featured on a number of commercial recordings, including John Luther Adams’ In the White Silence (New World Records), Lewis Nielson’s Écritures: St. Francis Preaches to the Birds (Centaur Records), and on the Oberlin Music record label. 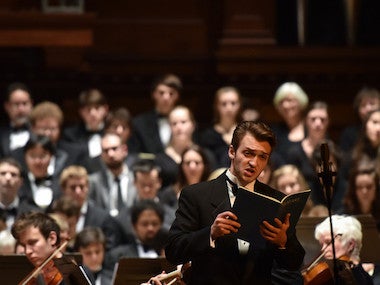 The Musical Union (MU) offers Oberlin community members the chance to join with Oberlin College musicians in performing these works. Typically, MU performs one concert per semester, rehearsing Monday evenings through the academic year. Concerts are performed with the Oberlin Arts & Sciences Orchestra in Finney Chapel.

The vocal ensemble rehearses with Director of Vocal Ensembles Gregory Ristow. Singers interested in joining MU should send email to Gregory.Ristow@oberlin.edu or call 440-775-8068. 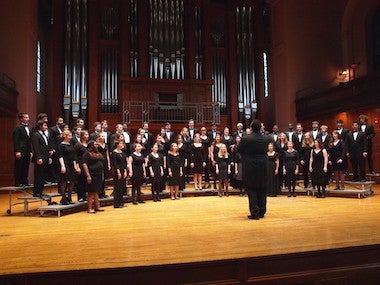 Founded in 1929 by Olaf C. Christiansen as the Oberlin A Cappella Choir, the Oberlin College Choir is a select ensemble of college and conservatory students who perform a wide variety of a cappella and accompanied choral literature.

In 1964, under the direction of Robert Fountain, the ensemble sang 39 concerts in the former Soviet Union and in Romania as part of the Cultural Exchange Program of the U.S. State Department. The ensemble also has performed at Severance Hall with the Cleveland Orchestra. 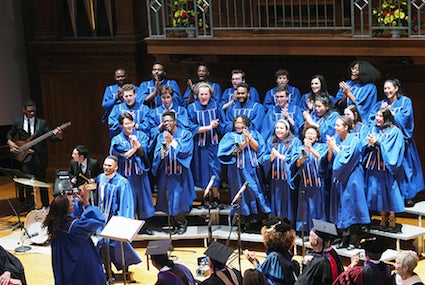 The Oberlin Gospel Choir launches in spring 2020, under the direction of jazz voice teacher La Tanya Hall. This group is open to all conservatory and college students with weekly rehearsals that lead to a performance.

The group will study and perform music that covers the diaspora of gospel music and represents everything from field songs passed on in the oral tradition from Africa, to modern gospel repertoire that incorporates elements of R&B, classical, neo-soul, jazz, and folk.

The focus is on phrasing, stamina, and three- and four-part singing to achieve the authentic sound of gospel music. 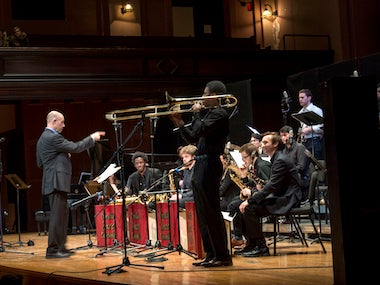 The Oberlin Jazz Ensemble is composed of jazz as well as classical performance majors, the ensemble is a component in a four-year curriculum in jazz studies leading to a Bachelor of Music degree with a concentration in performance, composition, or both.

The ensemble generally performs in Finney Chapel during the academic year and frequently appears at college festivals throughout the United States.

Oberlin Jazz Ensemble, founded in 1973, is one of several ensembles established by Wendell Logan, a beloved professor of African American music and onetime chair of Oberlin’s Division of Jazz Studies. 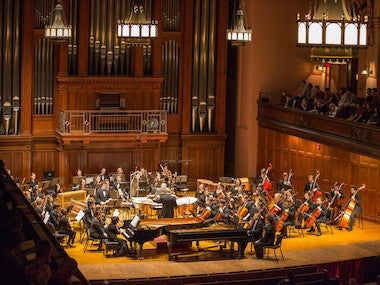 The Oberlin Orchestra has enjoyed a rich history of notable guest conductors including Igor Stravinsky, Pierre Boulez, Sir Simon Rattle (whose son is an Oberlin alumnus), David Zinman, Robert Spano ’84, and John Williams. Recent appearances by the Oberlin Orchestra include performances at Walt Disney Concert Hall in Los Angeles; at Cleveland’s Severance Hall; and a critically acclaimed performance at Carnegie Hall in New York conducted by Spano. The New York Times described the performance at Carnegie Hall as ‘‘stellar.’’ 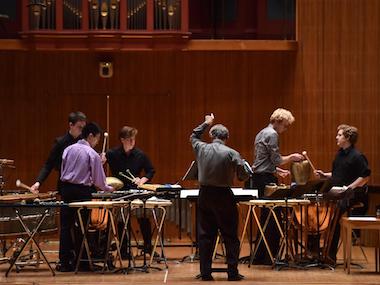 The Oberlin Percussion Group provides a regular forum for students to apply techniques learned in lessons, to hone their skills searching for the appropriate sound for a given situation, to learn the art of caring for instruments, and to discover diverse repertoire for the percussion ensemble—performing on campus and on tour.

The ensemble has access to an extensive collection of fine exotic and conventional Western percussion instruments. Most importantly, students acquire a keen sense of the dynamics of ensemble performance. Compositions are conducted only if necessary and students are coached to play like a chamber music ensemble.

OPG has made several recordings for the Opus One, Lumina, CRI labels, and Oberlin Music labels.

All percussion majors are members of the group and receive credit for the four hours per week of rehearsals.