Work it for Women was sponsored by 4 different organizations: SURF (Students United for Reproductive Freedom), ACTS (Advocating Choice Though Spirituality), ACLU (American Civil Liberties Union), OC Democrats, and HIV Peer Testers. Outside of the Sco, each group set up tables with information, selling brownies and snacks to raise money for local abortion funds. And inside of the Sco, after a donation, was really excellent music.

As Medicaid covers the procedure only in cases of rape, incest or life endangerment, abortion is functionally inaccessible for low-income women in this area. The money raised by Work it for Women was to help women with the costs of an abortion: travel, overnight stays and child care. At one count at the end of the night, the event raised over 2,000 dollars and also educated hundreds of students regarding the difficulties of obtaining an abortion, showing ways in which students can help.

After talking to a few SURF workers, I went inside to the concert. I caught the tail end of Like Bells, Will's really amazing band, and stuck around for The Sauce and The David Bowie Cover Band.

The Sauce is the high-quality funk jazz that play really solid sets. If there's an official school function in which dancing would be good... the Sauce is there. They're mostly jazz studies majors who have their licks down, so when they play, it's obvious that they're having fun. The guitarist, Jamey Arent, was particularly on, wearing this incredible look of rapture during his solos. The lead singer, Alex Birnie, did an amazing job working up the crowd. I had slid to the front and stood near Mike King on keyboards, who looked zen for the whole show, even when the tempo picked up.

And then, the Bowie Cover Band. Confession: I love David Bowie.

When I was still a bump in my mother's womb, my dad made my mom an excellent Bowie mixtape for her hour-long drive to college. Twice a day, she played the mixtapes, for my entire fetus-hood. I gestated through Space Oddity, Ashes to Ashes, Modern Love, John, I'm Only Dancing and Young Americans. My brain formed with saxophone solos. Now, as an adult, I know the lyrics to Bowie songs that I've never heard before. I've watched Labyrinth, the Prestige and The Man Who Fell to Earth. I know all the different stages of Bowie, from Ziggy Stardust to the Thin White Duke. 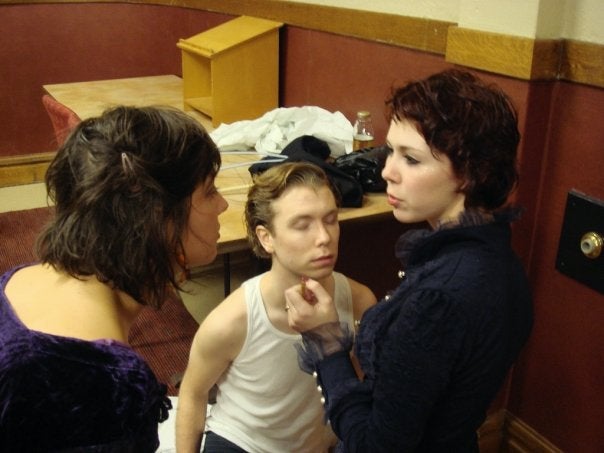 First, it was a big band: two sax players, two guitarists, a violinist, a drummer, a pianist, two back-up singers and a front man. They were all very attractive. Very, deeply, poignantly attractive. I needed to fan myself as they did sound check. The whole band were all in some form of Bowie regalia -- Andrew, one of the sax players, had the Aladdin Sane face-paint; Derek, the guitarist, wore a man-dress; the drummer wore faux-snakeskin pants. And the lead singer embodied Bowie, his blond hair slicked back and his eyes rimmed with eyeliner. Throughout the set, the Lead Bowie adopted the trade-mark mannerisms perfectly. He only left the persona for a few minutes during a break in the set to read a PSA about abortion statistics. 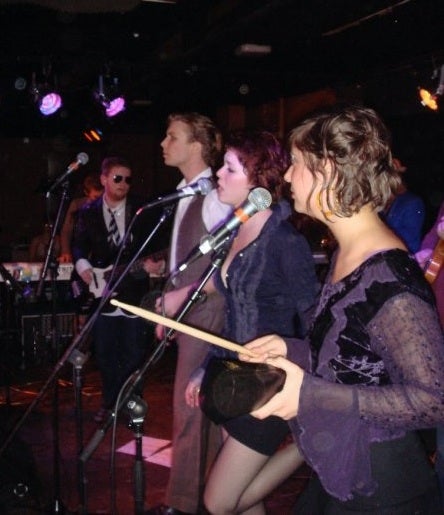 The crowd responded very, very positively: fans howling lyrics back at the band. Some of us jumped onto the step in front of the stage, just to get a little closer. Most of the folks in the audience were dancing in a crazed exuberant way: arms flying, hips shaking, legs kicking. You don't grind to Bowie; you dance. At the end of the show, the line for the water fountain was impressive.

After the concert, I walked one of the organizers home, to Johnson House, then back to North, which is the longest walk one can take on campus: 15 minutes.

The next day, after a tour and two circus meetings, I went to Ed Underhill's senior recital. As mentioned here, the composition students at school are top-notch. Ed's focus was on evocative, narrative pieces -- after college, he's going to grad school for film musics. From his concert, it's pretty clear that he's already on his way. Also, he plays the accordion. What can be better? 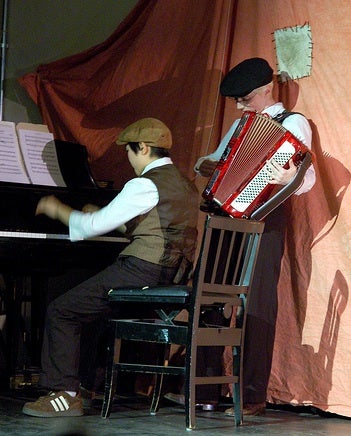 (Ed playing with Erika Oba in the Circus)

His first few pieces were solos and duets, but his final two pieces incorporated a small orchestra -- there were up to 19 people on the Warner stage. The final two pieces were incredible; the word "soaring" was described for those pieces. Best of all (for me), the pieces told a story. More than many pieces of writing, Ed's music had a strong narrative arc, which really grabbed me. The entire audience sat rapt, completely enraptured. I read an article in Slate that pinned down the feeling: "elation."

It was a good weekend.