The circus is over. We've packed nearly everything away, just some stray bits of lumber and set pieces sit in the gym now. There are some baking trays from the cupcakes we sold; a few juggling balls, some stray clothes, unused q-tips from the make-up table. The gym floor is scuffed, but swept clean.

The gym seems fuller than it was a week ago, as if it soaked up all the energy and music and pratfalls, lights and laughter. Everyone worked together. Everyone made it work. 99 people made it happen.

"Will Work for Circus" was great. Really freakin' great.

We packed the bleachers, night after night, squishing in 500 people per show. That'd be an audience of 1,500 in all. Including President Krislov, Elizabeth Houston and Ben Jones. There were 99 people in this year's circus -- performers, musicians, composers and tech folks. 120 counting the kiddie circus on Saturday and ushers.

The circus followed the job search of our Hero. Hero, played by Chris Sherwood1, was hapless, silly, prone to falling on his face and humiliating himself in front of people in power. Hero had a playmate, the Trickster, an all-around "catalyst for mayhem". Though she initially crashed the stock market, Trickster became an ally to Hero as the show went on. When he went for his interview, she spruced him up. 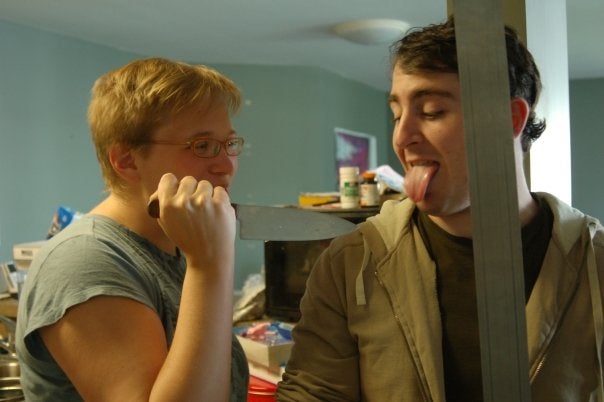 The directing process for Chris and Izzie was outrageously simple. The three circus directors and I got together, told them what would happen in a scene, and they played it out. They choreographed their own staff fight (both took Stage Combat last semester); worked out character motivations and little ticks to entertain the audience. Izzie built up this incredible maniacal laugh that brought out the mischievousness of her character. And Chris just owned the stage. Somewhere between being an actor and director, he figured out how to command attention.

Besides Chris and Izzie, we also worked with Mooch, Doug, and Josh. Mooch is an alum who knows more about the college than anyone. He was my landlord over the summer and one of the most freakishly competent, helpful, solid people around. And he runs Obiegame, a strategy mystery play-it-in-real-life game. Mooch was The Suit, our authority figure, yapping on his huge cell phone.

Doug is a first year, nicknamed Granite Shoulders. We stuck him in one of my muscle tees (I'm that ripped.) gave him a mask, heroic music and... ta-da, Superhero! Besides being a block of muscle-meat, Doug's also a really gifted sax player and a funny, incredibly foolhardy tumbler. He's one of the boys in tumbling club who stares at the crash pad and the spring board and just thinks, "What's the most dangerous thing I can do?" Then he does it. He's a walking liability.

Josh is the most talented object manipulator on campus. He can use any prop (staff, hoop, poi, rope dart, devil sticks, diablo); he's a gifted gymnast, former diver, and has ninja training (and went to SANCA). So, for the show, he was a ninja on a baby bicycle. And despite falling pretty hard on his stilts on the first act of the first show, he soldiered on through all the rest.

And they're fun. They're fun, awesome people.

Then Hero interviews and gets the job -- to be the head of the parade!

(It's a little fantasy: you work hard, you mess up, you still get the job.)

While the show is far from realism, there's something nice about making a circus at least circumstantially relative to the concerns of college students/community members. For much of the first act, Chris walks around with a sign begging "NEED WORK." He gets a paper that reads on one side "No Jobs" and on the other "Big Parade." We got some of the nervous laughs.

The show was tight -- after the first night, everyone nailed their cues. Our musicians were sweet; our composers were excellent. We had a range of performers across the ages, from 6 (kiddie circus), 12 (jump rope), 18-22 (most of us), 30s (Kathy).

The acts were brilliant, of course. Aerial rope, acrobalance, tumbling, and jump rope hit the professional mark, showcasing skill not normally seen at college. Orville, the acro balance performer, has trained for years; Carey, Zwoisy, and Yoshi put hours into aerial rope; Mike and Taylor compete all across Ohio and the world in jump rope. But even the acts that weren't executing super-human drops or freakish strength were still excellent. Swing was sharp, and stylish and crisp; aikido brought eloquent bravery; poi was enrapturing; the clowns were charming; the steppers and hoopers knew their moves and each worked together, cohesively.

At the end, the whole group, 90 performers (musicians in the pit) marched in a big parade circle around the gym floor. As they skipped and danced, waving props, my eyes got terribly misty. My last big show.


---
1. Chris Sherwood is one of my oldest Oberlin friends. We met on the internet, summer before freshman year, and talked about film and anime. We actually met in person the second day of orientation.
Chris waved, "Aries! It's Chris!"
I waved, "Chris!"
We hugged for an awkwardly long time. Chris said, "You're really tall!" and I thought "You're awfully cute, much more than I expected." But out loud, I said, "Well, you're really short!"

This has defined our relationship. 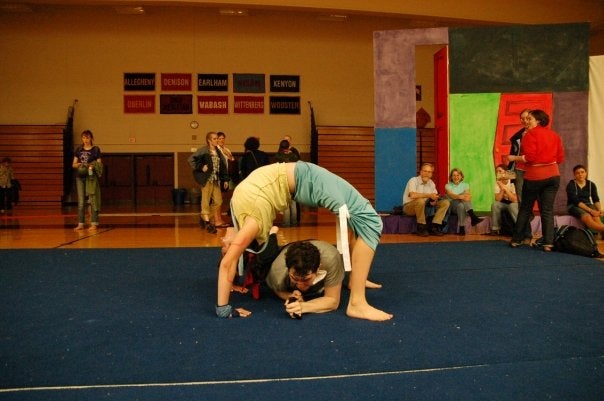 PS: There will also be a Commencement show, a reprise of the big show. It'll be like this, but littler.

I'm putting up a post that is entirely photos. Because I can.

I was typing it fast so I could beat your super pretty post.

The circus was incredible! Everyone did an amazing job!

Excellent! reminds me of the clown class we had in Warner in 1976, Bill Irwin presiding (the other class he was teaching was Tai Chi, held at the unholy hour of 6AM). Springboard and pratfalls were key. there were even oversize shoes.

gah! That sounds excellent! I wish I'd been able to do it... I first got into circus by clowning.

Well done guys. That was the first circus I ever seen and I was truly fascinated and amazed :)

Any chance someone caught this on video?