Update: My banner picture has now changed to a new photo, because the wolf was too cute to resist.

Oh yes. I love womb chairs. They're so much better than being in a real womb, because you're awake (well, mostly) to experience the sensory overload in all its glory. Plus, they're big enough for at least four people. When things are this good, you've just got to share. I have mega admiration for anyone who can actually work while sitting in one of these comfort monsters. When my head hits the marshmallowy-soft pillow, constructive time has no more meaning. Why should it, when I have all that I could want right there in the chair?

OK, womb chair sonnet over. I am going somewhere with this, honest. The womb chair, taken on the macro-scale, is an analogy for the soft, supportive, wonderful, dreamy bubble of Oberlin. In womb chair world, you may get knocked down, but you'll just bounce right back up. Then, in a few years' time, you'll emerge from the Oberlin womb/cocoon a fully formed butterfly of a person, who knows where they're going and what they're doing with their life. Well, that's the plan.

Moving closer towards my point - I've had some rough times over the past few weeks. I've been averaging five hours' sleep, because of the sheer amount of work I've had to get done. (And here I am at 1.43am writing a blog. Yeah, my priorities need sorting out.) I have felt like I am drowning in work, and there has been no let-up. But here's the strange thing: I wouldn't change it. Remember, this is coming from someone who is definitely not a morning person.

It sounds obvious, but when you are studying what you love, you want to work at it until your fingers bleed. At Oberlin, I can choose exactly what I want to learn. This is a revelation. It's all the motivation I need. I am being pushed academically for the first time - ever. School, for me, consisted of mass-memorisation and doing whatever it took to get an A. Did I learn anything, beyond how to cram, and what the best revision-energy snacks are? Nope. Oberlin, for me, represents an education as it should have been all along. If there existed an Oberlin College middle school, or kindergarten, or pre-school, or maternity ward (imagine those clever, clever babies), and if I could time travel, I would so be there.

Also, it's the classic 'work hard, play hard' mentality. You put in the sweat and you get the reward. All of my professors work really hard to give us constant feedback. They're super friendly, too. One even called me kiddo. I am pretending that that wasn't just because he didn't know my name yet. But seriously, from classics essays to music compositions, I've never yet had someone try to tone down or channel my ideas in their own direction. It's all about helping you to make the most of what you are doing, whether that's related to their own viewpoint or not, and to understand better what it is that you think. Basically, it's all about you! Want to take charge of your education? You've found the right place. 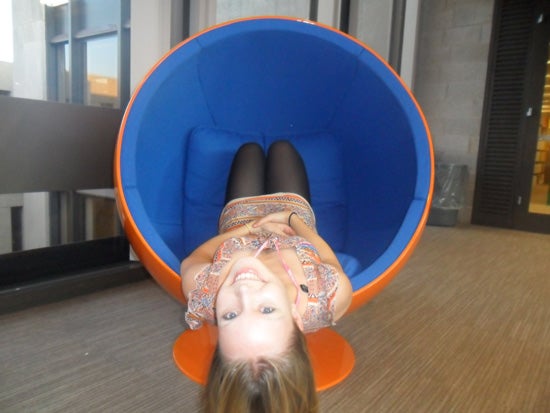 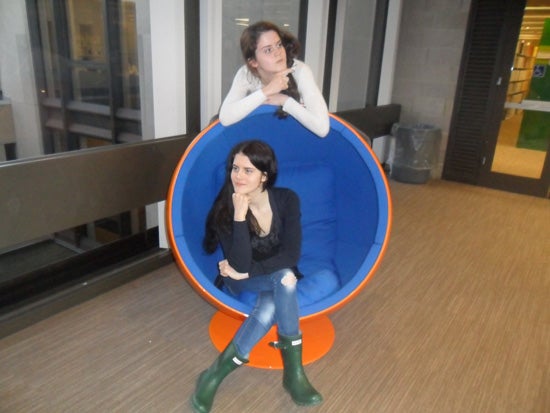 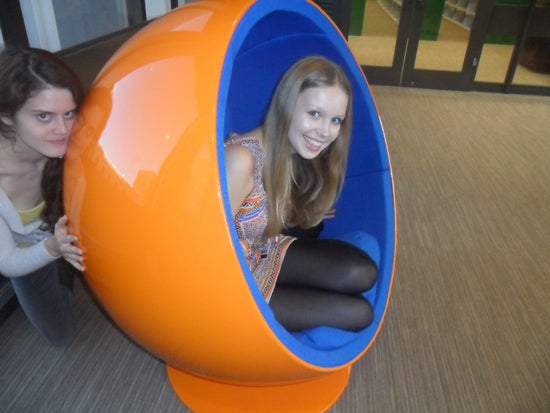 Jane positions the womb chair at the optimal photographic angle, while accidentally being photographed herself. 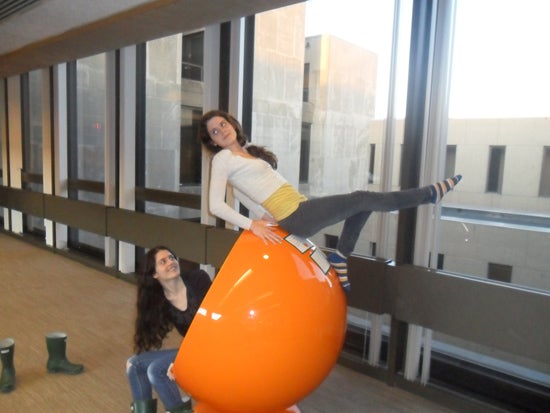 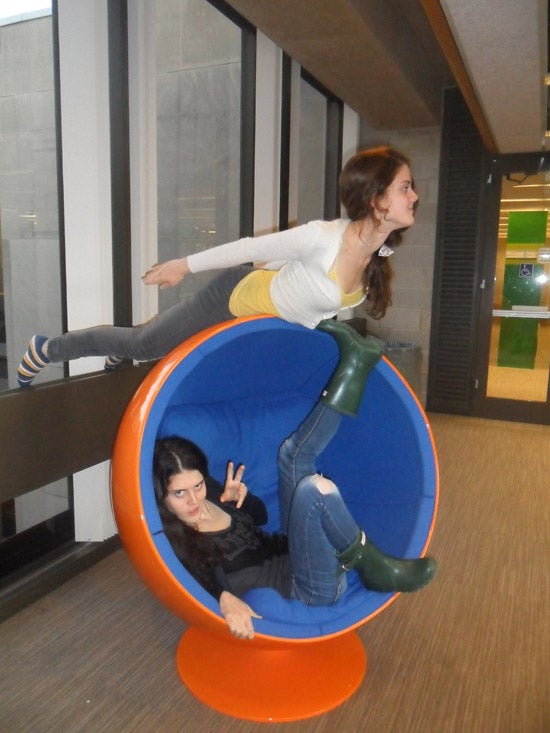 Interpretative Womb Dancing. Some kind of goblin, and some kind of aeroplane?

Dude, I spent all of Orientation and the first week of classes pretty much stuck in the womb chairs, and then I decided I couldn't afford to have narcolepsy. Because that's what womb chairs give you, pretty much.

Ruby! I didn't know that you were an admissions blogger too! I love the womb chair pictures.

Another Ruby! And you're an international student too! And we have accents! Oh, this year is going to be FUN.

Also, awesome first blog post! Womb chairs are the best. I love that they were on the application for Oberlin, too.

Oh yay! I actually read your blog when I was applying to Oberlin! I thought, I'm going to be like that Ruby next year! Also, I am SO with you about proper spelling. I adhere to the honour code. With a u. :)

You guys are so cute. Blog love is the best kind of love. Especially if it's also Oberlove. Oberbloglove? Blogberlove? Whatever, it's great.

Every time I sit down in a womb chair, I set an alarm because I will inevitably fall asleep. They're dangerously delicious.

A September in Oberlin

Some memories and highlights of September.