Plants responded much the same way as people. Not long after the last of the snow melted, flowers started popping up. The daffodils made their appearance first, all over campus. They were followed by the flowering trees. (Campus has never smelled so good. Sometimes I think I'd like to be a tree.) Now there are new leaves on all the trees and bushes. But it's so balmy and rain-free that, weather-wise, Oberlin seems to have skipped spring and gone straight on into summer! 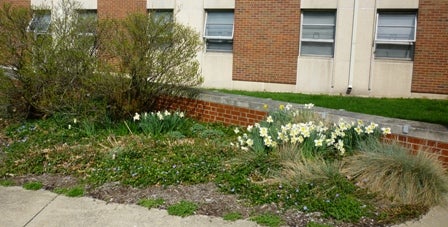 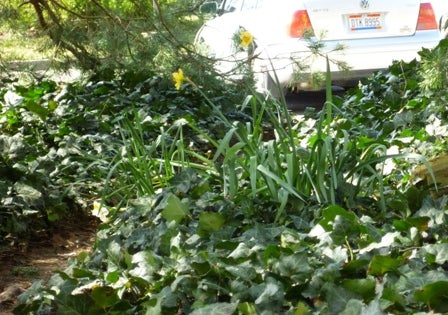 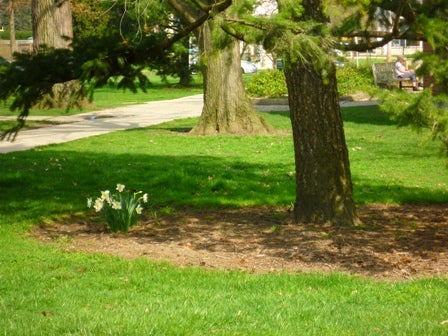 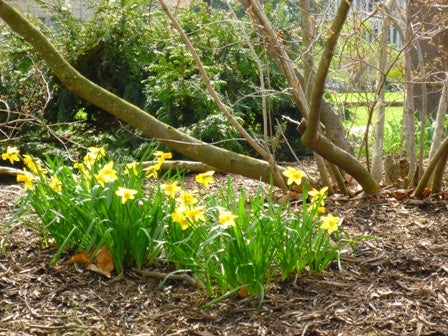 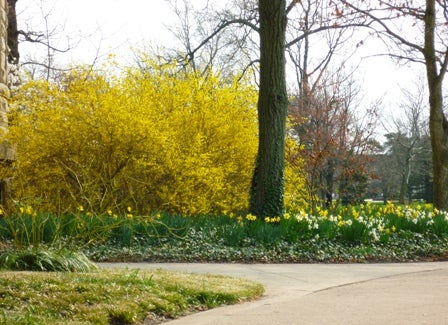 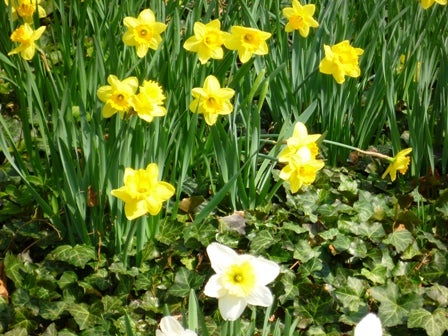 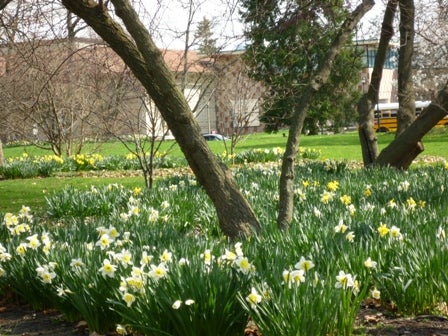 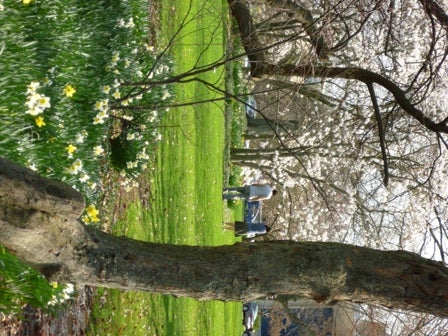 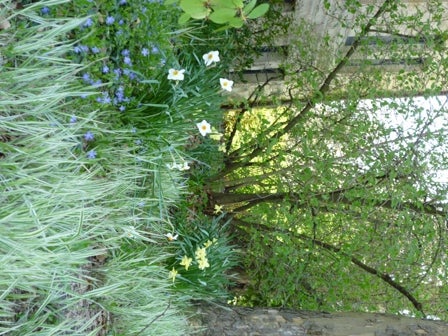 Let me take you back to mid-March. In this idyllic world of flowers and sunshine, for a while it seems nothing can go wrong. Students frolic; plants grow; birds sing. And suddenly, midterms rears its ugly head. Of all the things that could happen, this is the WORST--POSSIBLE--THING! Forced to study, Obies get (more) creative. Many take books and papers outside; I read most of Lord Byron's Childe Harold's Pilgrimage sitting on the grass outside North and in a chair outside the Science Center. For those with papers to write, the outlook is much grimmer. You run the risk of missing a nice day, and when you miss that nice day, it's gone forever. Regardless of all that modern technology can offer, screen glare is still a problem, and only the most dedicated try to bring their computers outside. 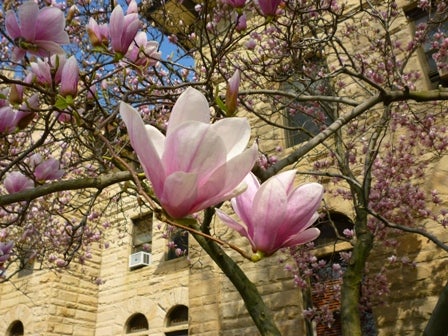 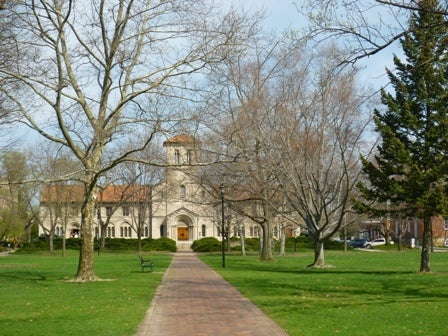 Yes, staying inside on a lovely day is icky, but ickiness is often a side effect of hard work, and so is passing classes. Besides, you don't have to be inside all that much. Busy people are efficient people, and people who are busy so that they can then go goof off are perhaps even more so. Time management skills that you didn't know you had come out when you have to choose between playing music on the quad with your friends, writing the Methods section of a psychology paper, and going to a linguistics symposium. Day by day, holding it together, test by test, getting it done--that's the art of de-stress. 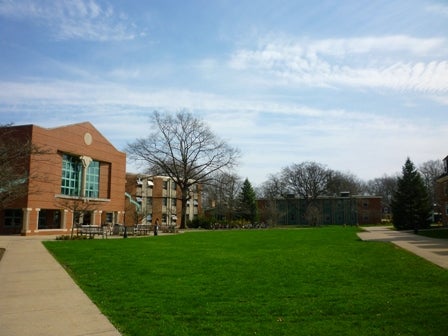 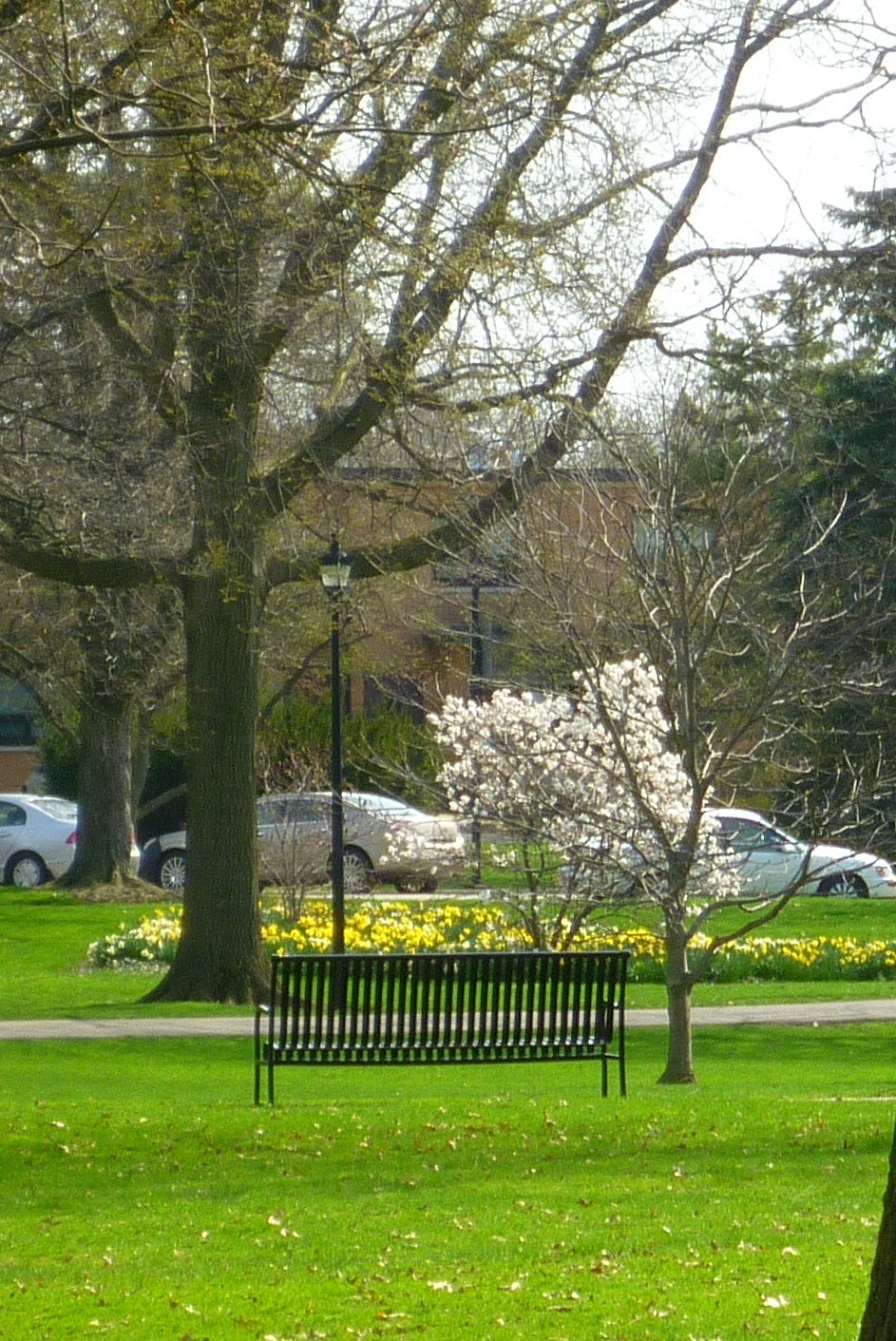 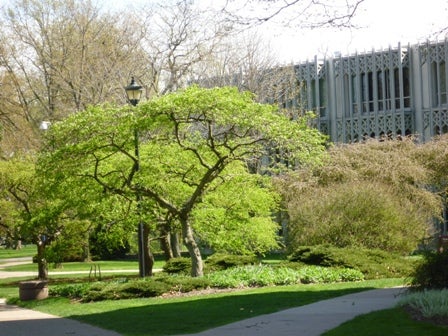 I didn't actually have any tests, but my life got temporarily consumed by a project my psychology class is working on. The class in question is Advanced Methods in Personality and Social Psychology. A more descriptive title might be, "Practicum in Running Experiments." After a few lecture-based classes, the class divided into three groups of five. Each group has chosen something to investigate, and we have the rest of the semester to do it. I've done research with professors, but in both cases, I was examining data that had already been collected. The actual design and execution of a study is not something I've had experience with, and missing it was one of my regrets in choosing not to do an Honors project. (Honors projects must be taken for credit, leaving less time and credit-space for taking classes senior year--and I want to take as many classes as possible before I graduate.) This class conveniently fills that gap. 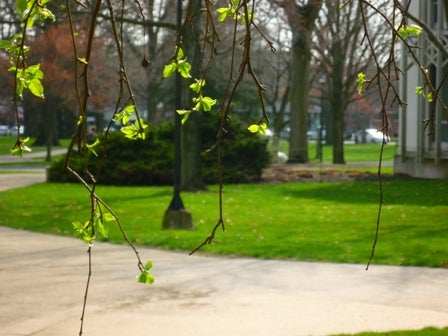 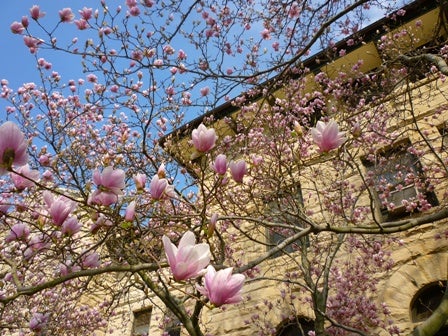 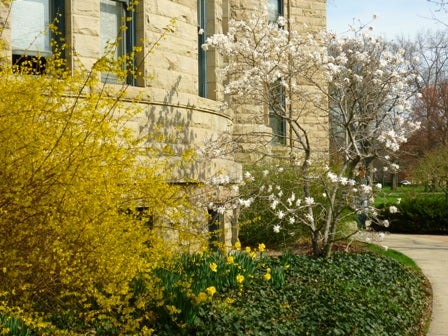 However, it turns out designing an experiment is easier said than done. Coming up with the general shape is easy, but organizing five people to come up with the details, coordinate so everyone has the same information, and evenly divide the work of writing up the project proposal is not. There were a few crisis moments, periods of near despair ("Why are we not ready? Ahh! We're so pathetic!"). Still, everything came together, and I think the project will go well. We're looking at connectedness to nature--a scale invented by two Oberlin professors, Professor Mayer and Professor Frantz--in children at a local elementary school. Oberlin, unsurprisingly, has a lot of collaboration between the Psychology department and the Environmental Studies department. When it comes to science, you gotta share; you gotta care. Ecopsychology is fun, and I love fun things! 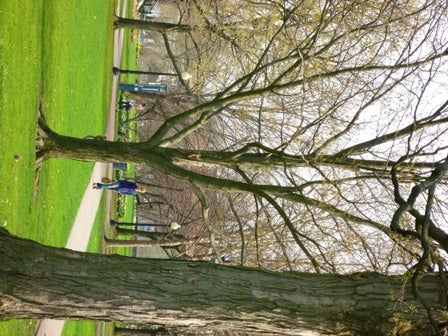 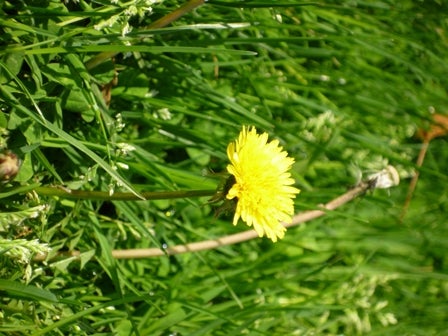 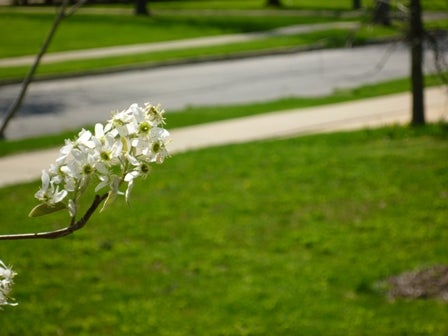 In fact, the fun has been doubled, because I'm also working with Professor Frantz on ecopsychology-related research. We're looking at data from the "Conservation Nationals," the nationwide college energy-use-reduction competition that took place two years ago and is taking place again this spring. Colleges around the country compete with each other to reduce energy and water usage from a previous-use baseline, and dorms compete within each college. At Oberlin, this is known as "Ecolympics." It begins the week after spring break--in other words, tomorrow.

There's been some moss-graffiti advertising about it. I've only found it outside the Science Center and the environmental studies building, but there may be more somewhere.

And it may be fair to say that the environmentalism fun has been tripled, because I am the Ecolympics coordinator/liaison/person in charge of propaganda for North! It's my job to get people excited for the competition and informed as to how to compete. I'm hoping that I can throw the nigh-obsessive enthusiasm of Sci-Fi Hall behind this drive. Granted, only a quarter of North is actually Sci-Fi Hall, but if we get involved, it'll make a difference. Not to muddle the issue with any fancy mathematics, but with us involved, the competition will get at least twenty percent cooler. (Cooler as in "more awesome," not as in "less heated" or "less intense.")

But people need to know that there's a competition going on and what they should do. To that end, I've made little Ecolympics FAQ fliers and put them up in all the bathrooms. (The back of a stall door is prime advertising space.) The fliers explain what the incentives are for individuals who go to Ecolympics events and for dorms that win Ecolympics in any of the three categories: water-use reduction, energy-use reduction, and event attendance. They also include suggestions for how to reduce energy and water usage. This will probably be the topic of a future post, so I won't go into it in too much detail here, but I'm eager for the competition to begin. 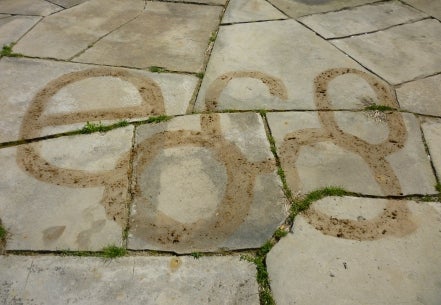 And on top of research-research, class-research, and Ecolympics, there's the O!Circus spring show to prepare for: I'll be directing one of the acts. I'm often busy, but this semester, I'm almost the stereotypical Oberlin student! I'll be the one to watch, the girl in the flow--the type of Obie every Obie should know. Spring brings joy and business with it, but we are all prepared to greet it. One great thing about being at Oberlin is that in the most hectic things you are never alone--on the biggest, most daunting projects, you've always got friends working, struggling, or playing with you.

EXPLANATORY NOTE: This was originally posted on April Fools' Day, 2012. It was meant to function like a perfectly ordinary, somewhat mundane blog entry, and, on the surface, it is. However, it is also larded with quotes from and references to the children's show My Little Pony: Friendship is Magic, a show whose target audience is five-year-old girls but which, for some unknown reason, almost immediately began attracting college-age fans, mostly male. It's now something of an internet phenomenon with a terrifyingly large adult fanbase. My goal was to amuse those who could pick up on the references I threw in, while also writing a post that made some sense on its own. For those of you with no knowledge of the show who are confused by a few of the more bizarre statements ("twenty percent cooler;" "I love fun things!!"), song-lyric-esque phrases ("You gotta share, you gotta care"), or the letter-like sign-off, just know that those are from the show. I haven't gone completely nuts (yet).

Oh, and the title is the name of an episode, and a song in that episode. 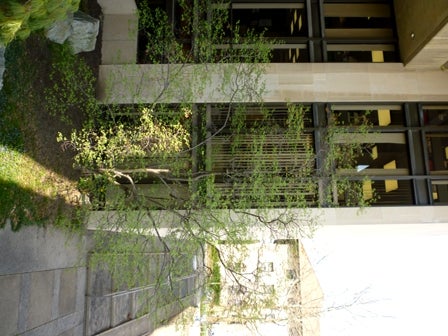 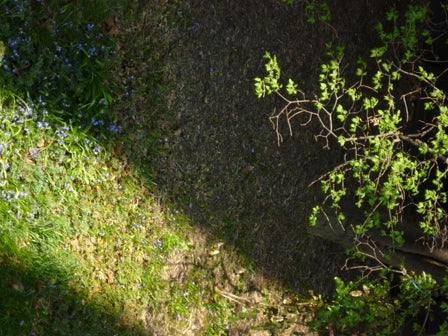 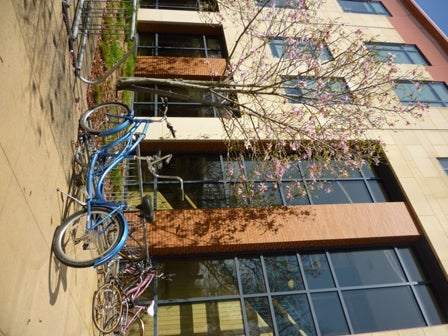 Until you shared its magic with me, I didn't know what a big adventure and tons of fun springtime in Oberlin could be. I guess the magic of nature makes it all complete.

Mom
(who can still surprise my little Tess)

VERY SURPRISED! I love you, Mom!

"Time management skills that you didn't know you had come out when you have to choose between playing music on the quad with your friends, writing the Methods section of a psychology paper, and going to a linguistics symposium."

Are we... the same person? Like, exactly the same person (except an IM proposal instead of a psych paper)? Also the comments on the blog make me kind of happy.

I've been blinded by daffodils and can't say a single intelligent thing about this blog post except PRETTY.

Ma'ayan is not a fan?

No, daffodils are my favorite flower in the whole world. I loved your post, but my brain turned into a puddle when I saw all the flowers. It's kind of how people see kittens and go all gaga? I'm like that with daffodils.

I also like this post, but every time I started scrolling up to reference things, I got distracted by the pictures. My attention span is so totally shot.