People I know are spending Winter Term in all kinds of places - New Orleans, West Virginia, even Taizé, France. Costa Rica seems to be a perennial favorite, and of course, there are all kinds of things going on in Oberlin, from intensive language courses to Aikido. But I'm doing my off-campus project here at home. I arrived here two days before Christmas Eve and have pretty much just stayed put.

My official Winter Term project is a little nebulous, and it hasn't exactly gotten off the ground yet. To keep myself busy and productive, I've embarked instead on something I'm calling A Project a Day. The idea is simple. I have to make one thing every day - anything from a wolf hat with headphones sewn into the brim (one of my December projects) to the slightly ambiguous "important arrangements" (a project from early January).

Here, for the curious, is a photo of the wolf hat. 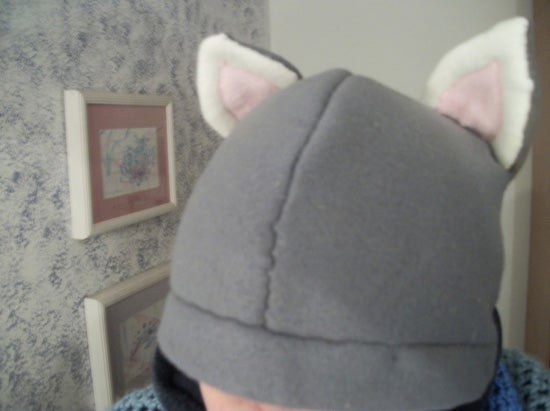 Although the projects have gotten a little less ambitious than hand-sewn hats, I've had a lot of fun. A couple of weeks ago, I repaired my foam sword collection - torn to bits in the process of a ferocious human chess game - and they now stand ready to be brandished in a snowy contest of arms. I've also made a simple origami incense burner for the incense I picked up at an Indian dollar store (and would never dream of bringing back to Keep). Today, I started to sculpt a lion from the snowbank at the end of my driveway. Even blizzards have benefits.

Actually, I'm loving the snow - so far, from safely inside my drafty house. It throws off light like careless music; the world is brighter, mantled in ice. Of course, I'm also slightly snowblind, but what of it? 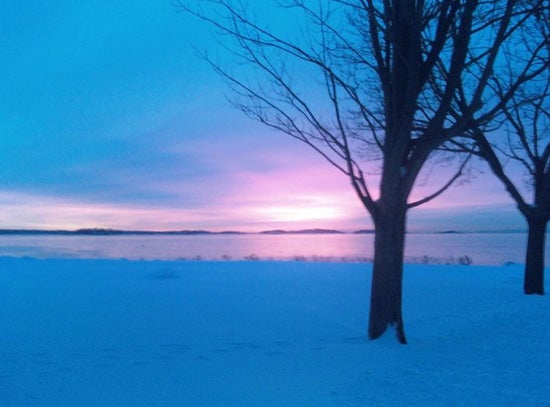 This picture was taken by Anita Visentin-Perito during a morning run.

I'm also a little homesick. Having lived in Oberlin for a single semester (not even including breaks), I'm probably not licensed to call it "home" yet -- but it still feels that way, and I miss it just as much as I missed my hometown last September. (Wow, remember September? Sun? Green growing things? I'm having trouble believing I'll ever see grass again.)

I miss co-op food, co-op friends, even co-op cleaning. I even miss classes! Today, I've been reviewing the requirements for my tentative major in biology and constructing a theoretical schedule for next semester. I know that most self-respecting students did that the week before registration week, rather than eight weeks later, but I had no idea what I wanted to study at the time -- not even the shadow of a ghost of an idea that is a biology major.

I ended up in a Spanish class, a class on medieval religious thought, Intro to Psych, and a class for swim teachers. All of those are very interesting, but none of them are terribly useful for bio, and I'm just a little thankful for add/drop.

I'm getting a little ahead of myself, though - I still have three weeks to go before we're all due back on campus February 6th. Here's hoping for a wonderful Winter Term, for all of you scattered Obies.

"It throws off light like careless music; the world is brighter, mantled in ice. Of course, I'm also slightly snowblind, but what of it?"

This is gorgeous. Very poetic!

That hat looks most fuzzy and amazing for the winter yet to come. Can't wait to hear about your other mini-projects of the month!

Ida: Yeah, it's the language lab. I'll have to write an entry on the cockatiels once I get back to Oberlin -- everyone seems to have heard about them but no one knows where they are.

Ma'ayan: I hear it's working out well! And I'll be sure to post soon about another handful of projects.

Thanks for the feedback, y'all. I'm very excited about my first Official Oberlin Blogger Comments. :)

That hat is AWESOME. Welcome to the blogs! Yay!

who knew you could sew?

Congratulations on your first official posting. 'Tis a grand achievement! Twelve more and you'll be president of Oberlin. I'll be looking foreward to reading more of them. Lots of love.