One of the perks of playing college basketball is that it can take you places you might not otherwise be able to go. To kick off this past winter term, the Oberlin College Men's Basketball team got to visit sunny California for a week.

I began my trek from Cleveland Hopkins International Airport at 8:30am the morning after Christmas. I was joined by one of my teammates, our strength and conditioning coach, and our athletic trainer. We would meet up with the rest of the team once we reached Los Angeles (or actually the Ontario, California, airport). The trip out was supposed to be... unpleasant... because we were flying from Cleveland, to Charlotte, to Denver, and then to Ontario. In other words, like an entire day of traveling after waking up before the sun. Luckily, the night before, I decided to check up on the status of our flights. I realized that the connection in Denver had actually changed to a connection in Phoenix something like two months before. This was personally great news because my girlfriend lives in Phoenix, so it all worked out and she was able to come and have lunch with me during our layover.

Once we landed in Ontario we made our way to the hotel to reunite with the rest of the team and ate ice cream sandwiches to celebrate the birthday of our strength coach. Somehow we had been flying with him all day without knowing it was his birthday. It had been weeks since our last team sanctioned basketball activity, a close loss at Ohio Wesleyan, so practices were sure to be tough. It's always hard to keep in college basketball shape over breaks--all the food and drink and friends and family to see.

After our first few practices, and oddly two more birthdays including my own, we were treated to a poolside cookout. Then came a trip to Long Beach, where we got to meet one of our alums, Everett Glenn '74. Everett runs a non-profit organization called ESP Education & Leadership Institute which aims to deliver programming that equips student-athletes, in particular Black men and boys, with the resources necessary to have success outside of playing their sports. I had actually reached out to Everett over the phone in the summer when I had heard about the work he does because it's the work I want to do. It was great to finally meet him in person, and I might not have if it wasn't for this trip. 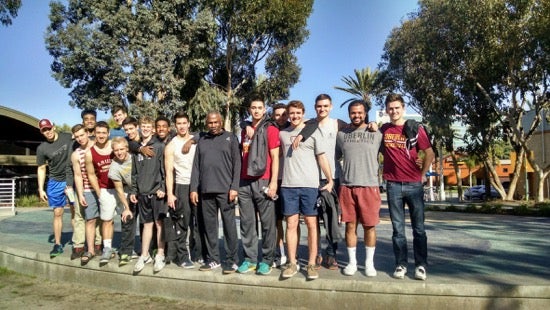 The next day, December 29th, we had our first game of the trip at Claremont McKenna-Mudd-Scripps. After beginning the game with a 14-2 lead and leading for most of the game, we lost by one bucket in the final seconds. After the loss we didn't have time to sulk. An hour after the last buzzer sounded we were at the airport and headed to San Francisco before our next game versus Santa Cruz on New Year's Eve. On the 30th we were lucky enough to practice at the University of San Francisco, home of a very historical basketball program, including the legendary Bill Russell and a 60-game win streak. 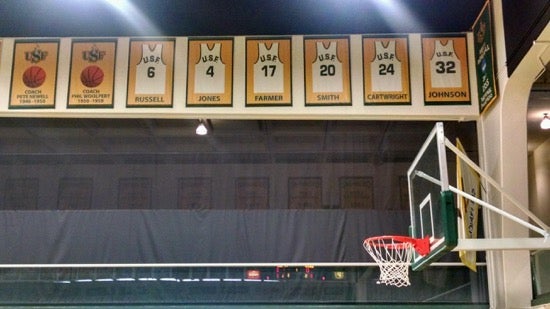 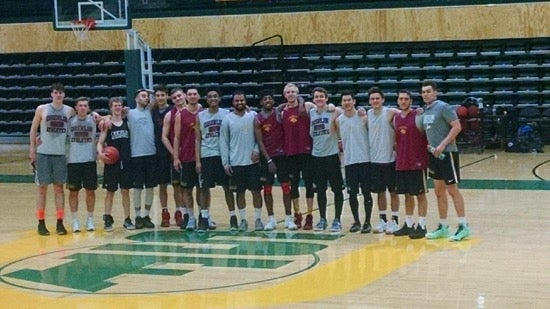 The team at USF

After a day of sightseeing in San Francisco, the team went to an Oberlin College alumni event sponsored by the Heisman Club. After a night of chatting with fellow Obies, we headed out for the 90-minute drive to our hotel in Santa Cruz. Instead of the typical bus, the team rented out 4 smaller vehicles to ride in style. Not only did we look good, but this actually led to more intimate conversations in the cars instead of the usual collection of headphones and head-bobbers. The conversation in our car went from talking about our ethnic makeups and the ways we are racially perceived, to nutrition and top sport performance training. 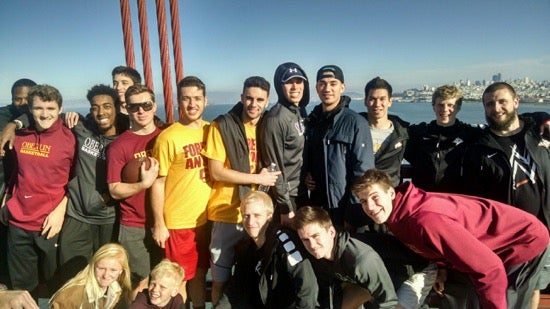 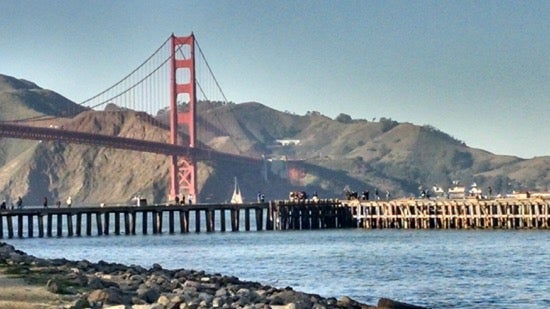 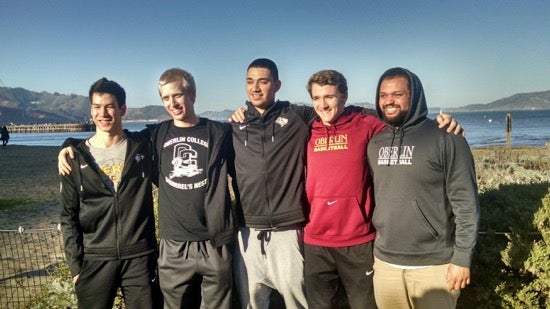 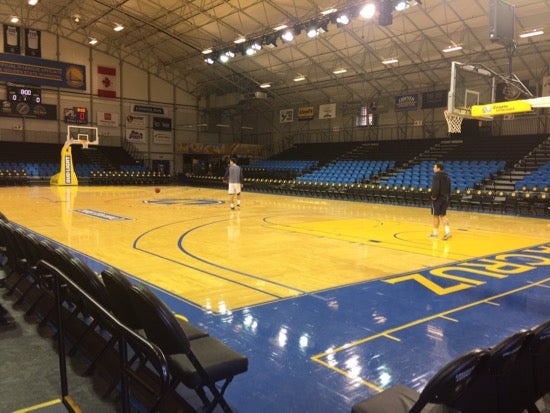 Our trip to California was filled with fun and games, but I am most thankful for being able to visit my teammate's dad before he passed away after a bout with cancer. We hadn't been able to see him in years, and he is a huge basketball fan, so it meant a lot for him that we were able to stop by and say hello.

While I am critical of the way sports are used at times, especially within institutions of higher learning, this trip resembles the good in college sports. During a break from the academic year, we were able to travel to places that many of us had never been to and may not have been able to go to if it weren't for this basketball trip. We also grew closer and improved as teammates, friends, coaches, and mentors. Most importantly, we met and saw people that we may not have been able to otherwise. I thank Oberlin College Men's Basketball and everyone else who made this possible: the alumni, athletic department, the college as a whole, and also everyone who helped me to reach the opportunity of attending Oberlin College.