(See my previous post for the actually productive things I did.)

Malaysia is hard to describe briefly not just because I'm a foreigner--even if I have familial ties--but because there aren't a few words that can sum it up. Malaysia, like the language of Hokkien that I was learning, is made up of a blend of cultures. In general, there are three main racial groups: Malay, Chinese, and Indian, which leads to an Hindu temple down the street from a mosque and a church and a Buddhist temple.

This mix of people leads me to a very important topic: food. Malaysia, and particularly Penang, where my grandparents live, is well-known on those travel cooking shows for having amazing food. Those shows aren't lying. The food is phenomenal. Frequently for lunch or dinner we went out to hawker centers, where there are many stalls selling various dishes. You find what you want, order it, and the person running the stall starts cooking and brings it to your table.

Let me walk you through some of the dishes I ate.

I just missed Chinese New Year, unfortunately, which would have involved even more good food and a lot of relatives, but I was in the country for Thaipusam, a large Hindu festival. Thaipusam celebrations vary from place to place, with the one in Penang among the largest. On the first day of the festival, a chariot containing a statue of a god travels from a temple downtown in Little India to the Waterfall Temple some distance away. This takes all day, because along the way it stops for people to break coconuts in front of it and give offerings of money and fruit.

On the second day, people who have previously prayed about it carry kavadis to the Waterfall Temple. I won't even try to describe a kavadi. Let the pictures speak for themselves. 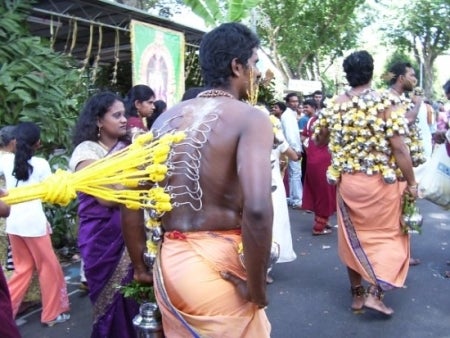 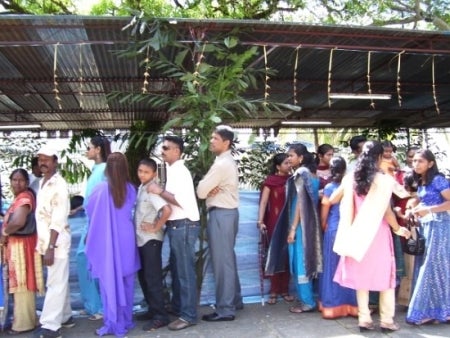 And, of course, there was a lot of good food available, if you were willing to brave the lines. Tourists even got spoons to eat it with.