It's winter again, and on Sci-Fi Hall, that means fun! Even for those with intense, time-consuming winter term projects, silliness and exuberant chaos ensue.

Actually, to tell this story in full, I need to go back a little, to the week before winter break, when we decided to blow off some finals stress by dressing up as post-apocalyptic bikers, smearing fake blood on our faces, and raiding another theme hall. This happens from time to time. Early last year we attempted an attack on Classics Hall only to find that they were all late for their own movie night, as I have recorded here. This fall, we got it right and arrived when the foe was present--you can read it from the point of view of Classics Hall here. Unfortunately, I was sick the day of that particular raid, so I threw myself into this one with even more vigor.

The citizens of Classics Hall were now our allies, so who would we attack next? Our RA and fearless leader, Julie, picked DIY Hall. The Do-It-Yourself-ers apparently don't have much in the line of hall community, so this was actually a well-intentioned deed: a declaration of war usually serves to unite people. She sent off an e-mail to DIY Hall's RA, warning of the impending assault and providing date, time, and location so that the residents of DIY Hall could meet us and do battle. 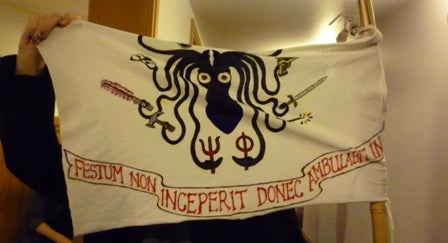 We Sci-Fi residents got arrayed in splendid attire and awaited the arrival of our vassals. Classics Hall's delegation showed up a little late, but they were coming from several thousand years ago and the other end of campus, so that was excusable. 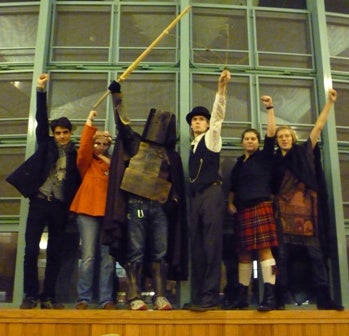 Then, with Alex beating the drum and the rest of us chanting, we began to march! We marched down the stairs, out of North, and fifty yards away to Noah. We entered, still chanting, and walked halfway down the first-floor hallway of Noah, where DIY Hall is apparently situated. We emerged into their designated lounge. 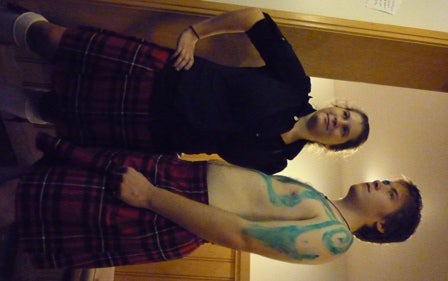 It was empty except for one girl studying at a table. She seemed impressed and amused at this imposing, mismatched, and above all loud band of ruffians coming stomping into the room, but she laughingly informed us that she didn't actually live there, so we could not do battle. 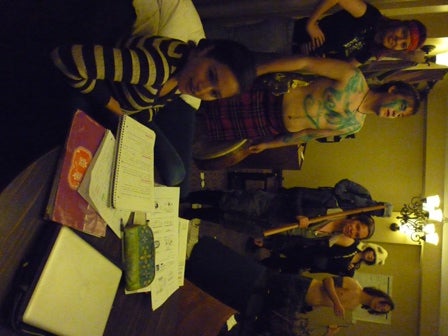 To punish DIY Hall for their cowardly lack of hall spirit, we very carefully and artfully trashed their lounge. Chairs were tipped gently onto their sides, blinds unevenly raised, a framed picture cautiously tipped off-center. We also dropped little pieces of paper emblazoned with the Greek letters psi and phi (Sci-Fi, get it?) all over the place. Then, to satisfy our own desires, we read out a Declaration of Being In A Fight and left it on the table where the innocent observer was working, this being the only article of furniture (besides the piano) left upright. 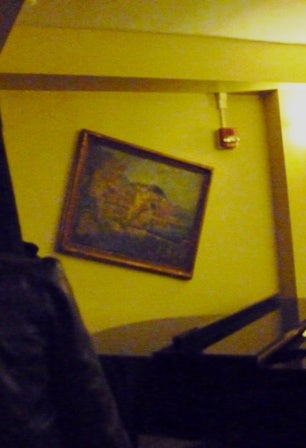 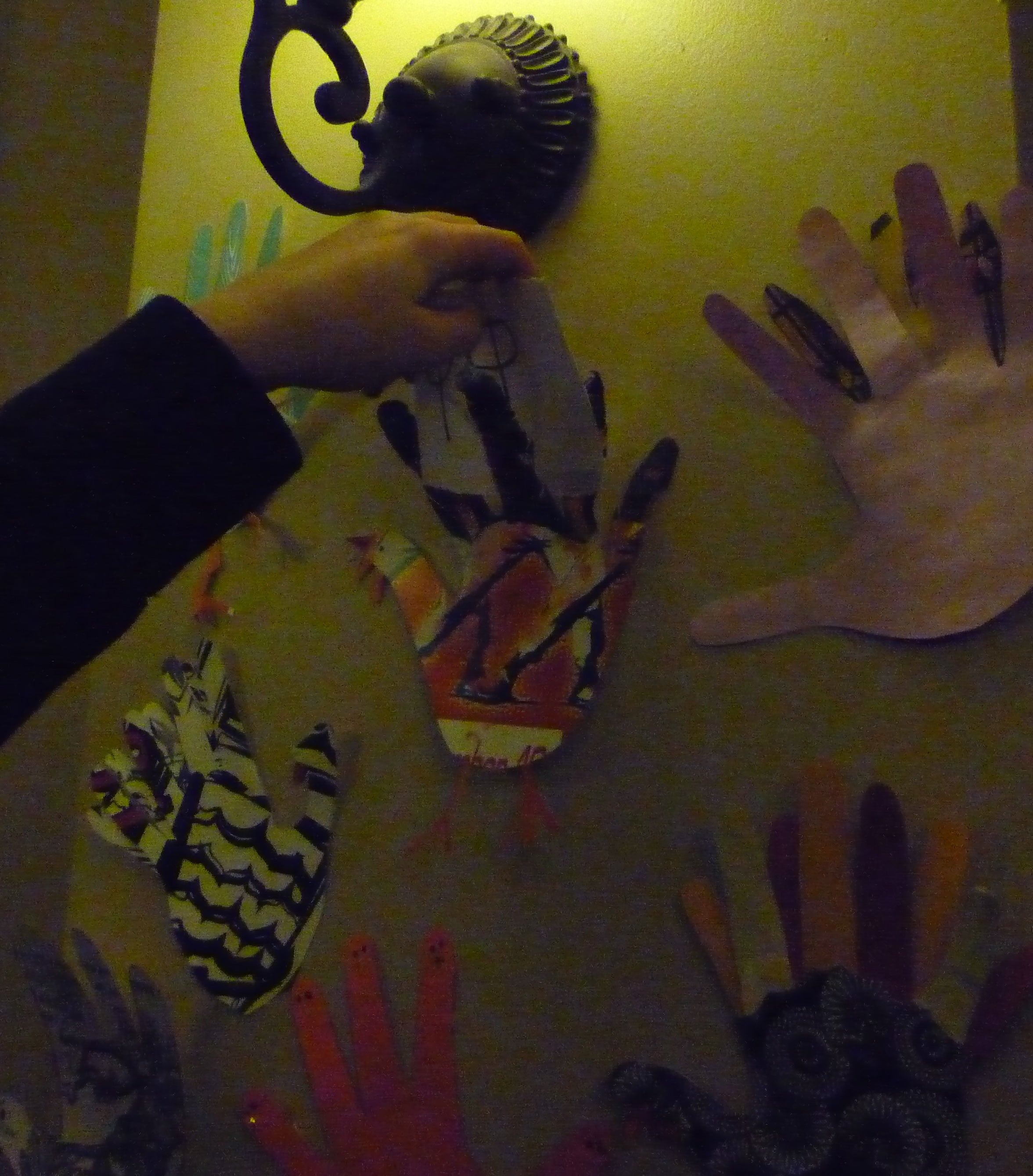 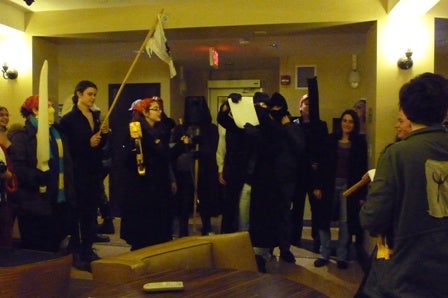 We captured a potted plant that was sitting there and bore it back in triumph. It is now forbidden to refer to it as anything but "the trophy." 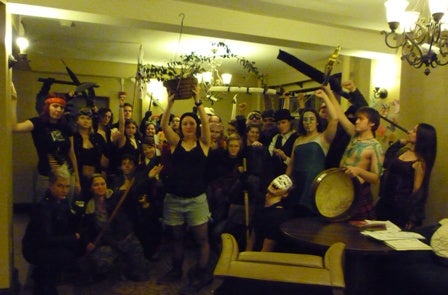 All of us in the DIY lounge, with the trophy being held aloft triumphantly.

And then we went stomping through the lower floors of Burton, because when you have a giant mob of people all dressed funny, it's a shame not to show it off. 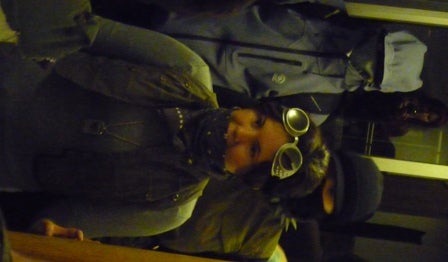 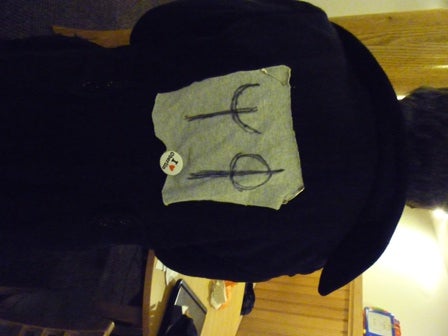 That was the first phase of the story, the first raid. The second is far more sophisticated, although it, too, met with far less resistance and excitement than we'd hoped. What's a hall got to do to get some rivalry around here?

The facts are these.

Sci-Fi Hall and friends have, as we did last year, taken over Keep Co-Op. It is officially known as "Keep (Sci-Fi/Fantasy Co-Op)" on OSCA forms. This pleases me. There are forty or so people eating there. We cannot keep leftovers this year--OSCA lost its license to do so last spring, sadly--but, on the upside, we do have lunches, which we didn't last year. There's definitely enough food around. There's a lot of waste, though, because of the no-leftovers rule: we have to throw uneaten food away. But I digress.

Now that we are a co-op, it seemed logical to launch a raid against another co-op. Which co-op? Pyle, located in the basement of Asia House, is by far the nearest, only a parking lot away. Being ambitious, we decided the raid must have an object--we must steal something. What? Their sriracha.

Sriracha, for those who are not in the know, is a kind of hot sauce often found in co-ops. Some people find co-op food terribly bland until doused in it. Apparently Pyle has rather a lot of it.

The idea was to get most of the co-op together--in our standard post-apocalyptic biker gear--in Keep, take a few pictures, and then proceed across the parking lot to Asia House while Pyle was doing their intensive cleaning sweep. There, we would split into two teams. Team Downstairs would rummage through Pyle's food storage areas--their fridge, dry foods storage room, and kitchen--looking for the sriracha. We would also leave little pieces of paper saying "GLUTEN" in their gluten-free storage area (we're so bad). 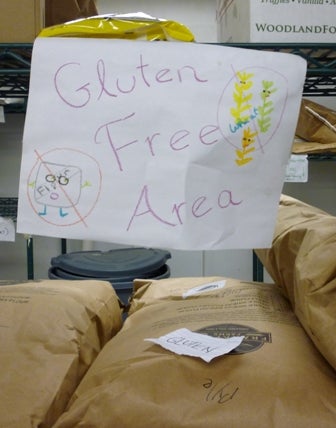 Team Upstairs, meanwhile, would stomp around alarming the Pyle people and leave the following ransom note:

Pyle,
We have your Sriracha. If you ever want to see it alive again bring a baked good in your finest loaf pans to the parking lot behind Stevie at 7:00 pm Tuesday 17th. Only then will we sri render the racha. No funny stuff. Regards,
Sci Fi Co-op

(I think we wanted the loaf pan as much as the baked good.)

Anyway, the plan was put into motion. We didn't have quite as good a turnout as we usually do, but it was exciting nonetheless. Don't we look terrifying? 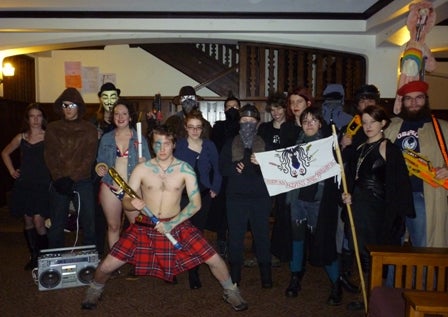 Obligatory poorly-lit group shot. The Care Bear is Keep's standard; we carried it along with the Sci-Fi flag.
. 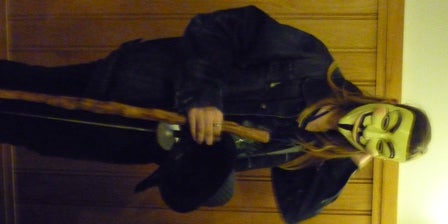 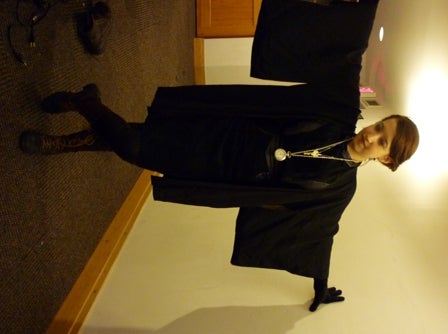 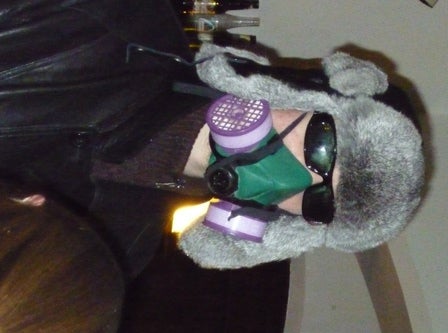 Since I started watching Doctor Who, I cannot see a gas mask without thinking, "Are you my mummy?"
.

Connor is wearing a mask under the bandana.
.

Reading over the ransom note.
.

Keep in mind it was hovering around freezing outside . . .
. 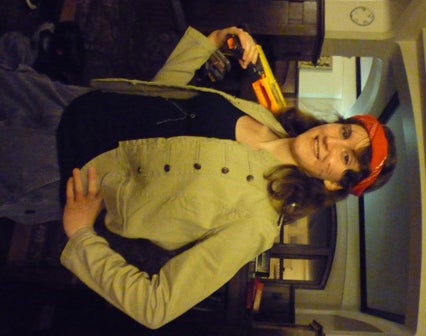 I am wearing cargo pants that I found in the free store. They are perhaps the least flattering things I own and are in severe need of a belt--you couldn't quite fit two of me in them, but you could probably get away with one and a half of me. However, they are biker-looking and they have so much pocket space. (Anyone who knows me very well at all has already been subjected to my rant about lack of suitable pockets in women's clothing, probably more than once.) On this raid, I discovered something that pirates seem to have learned long ago: there is something about wearing baggy pants low on one's hips, especially when combined with a tank top, that makes one want to swagger.

Oh, and I drew scars on my face with eyeliner. That's really all I use it for--scars, Klingon forehead ridges (long story), and kitty whiskers. 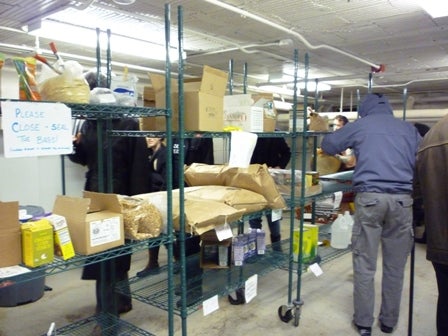 Searching for sriracha. Hmm, that would be a good title for a movie.
. 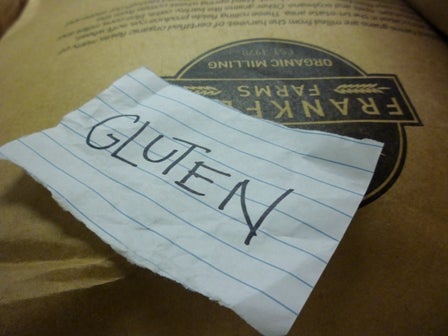 We marauded through Pyle, with me trying to take pictures as we went. The denizens of Pyle were surprisingly passive by our sudden and noisy appearance, and not passive in a "stunned, shocked, and amazed" kind of way--more in a "hey, what? Oh well, whatever" sort of way. But we exited with at least half a dozen bottles of sriracha, so we considered the raid a success. The sriracha was spirited away and hidden someplace where Pyle will never find it.

We found out the next day that we had somehow missed several bottles of sriracha. Perhaps because of this, they didn't show up with the ransom. We are plotting what to do next. 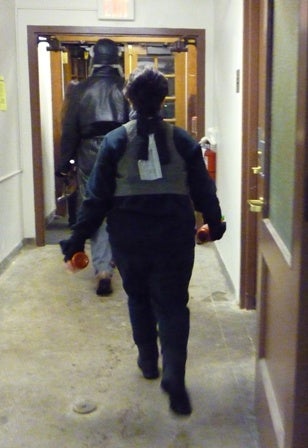 The groups you are raiding are NO FUN.

I know. I'm hoping someone who reads this is from a more fun group and they can propose a rivalry.

If only there was a Classics Hall Co-op this Winter Term!

Gluten free is actually a big deal. Pyle had up to 6 gluten free people last semester and avoiding cross contamination isn't a joke. We would label things that had been contaminated with pieces of paper that said "gluten". Your notes could have caused more (unneccessary) confusion than you think.

Oops! We didn't know that you did that, obviously. I guess we figured that anything contaminated would be removed from the gluten-free area already, so our papers would be pretty obviously a joke. It's kind of like scattering little pieces of paper that said, I dunno, "MARTIAN DEATH FLU" or "SCI-FI COOTIES."

In any case, they were loose pieces of paper, not attached to anything, and all the ones I saw were on unopened containers, so hopefully no one assumed anything was contaminated.

stealing from a coop isn't funny. it's hurtful. we pay for that food with our own money.

We're not stealing anything permanently! You don't seem to understand. We're not hurting anybody, we're trying to make them laugh! We're eccentric, but harmless. We're dressing up in funny costumes and parading through hallways with a flag with a squid on it, for Pete's sake.

We didn't take anything necessary (six or seven half-empty bottles of hot sauce), didn't damage anything, told them that we had it and where and when to meet us so we'd return it. And we are also a co-op; Pyle could have raided us back in an equally harmless way--in fact, that was what we wanted!

Regarding the snarfed sriracha, I believe we've tried to return it a few times since, but people haven't shown up to accept it. (Not positive since I'm not on the raid planning committee.) Pyle didn't meet us at the ransom drop, but I'm pretty sure that even if they showed up empty-handed, we would've given them the sriracha back.

Now, as I said, we are plotting what to do next. That means figuring out a way to deliver the sriracha back to Pyle such in a way that they cannot possibly miss it. One of the suggestions was to leave cryptic clues leading them on a scavenger hunt, but we thought they'd be too apathetic to follow up on it, like they were with the ransom note. Clearly, we must take matters entirely into our own hands . . .

To the anonymous folks commenting here: co-op raids go back farther than themed hall raids. Keep and Harkness have a rivalry that goes back years, and there's usually at least one special meal per semester than involves raiding the other co-op. Things stolen: dishes, utensils, furniture, a bag of flour... but all of them make it back in a counter raid within the next 48 hours. Keep will eat lots of meat and go all Viking at Harkness, who will retaliate with a vegan pirate-themed plundering.

It is all in good fun. No one is hurt, nothing is irreversibly stolen or destroyed. (And while gluten allergies -- as are all allergies -- are serious bizness in co-ops, I would have loved finding "Alien Life Form-Free" notes all over the Hark storeroom when I was a co-oper.)

I'd love to see vegan pirates!

i would like to second ma'ayan and emphasize her statement by saying: cry more, babbies

co-op raids historically end with furniture and large items being stolen and relocated and public areas turning into all-out battlefields. if you cannot deal with the plundering of a measly seven bottles of sriracha clearly you are new and have no idea what you are talking about.