Last December, I gave a 45-minute talk on the adaptations that allow different animals to survive winter weather. I titled it, whimsically, "Winter is Coming." I focused on three species: Gallus gallus domesticus, Oryctolagus cuniculus, and Pantherophis guttatus. These three species represent a pretty diverse array of vertebrates, and they each have unique adaptations. Honestly, though, I analyzed them because they're what I had around: 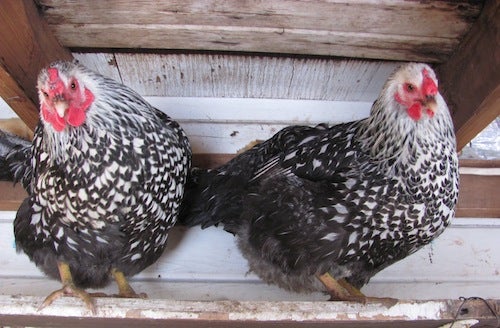 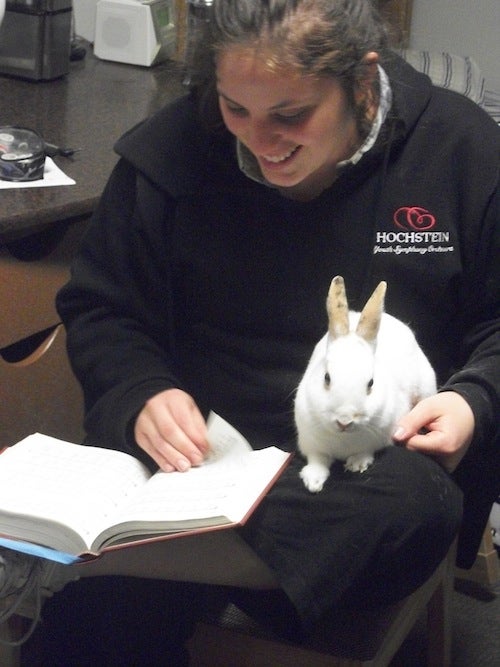 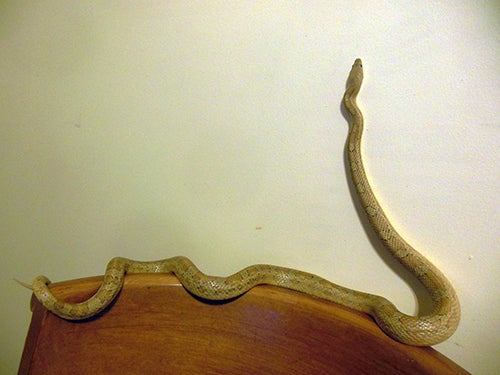 Despite my convenient proximity to my specimens, all of which live in my house, researching and delivering the presentation was one of the hardest things I've ever done. A talk of that length requires roughly the same effort as writing a ten-page paper, but it's way more frightening, at least to me. I didn't even do it on purpose. It was my professor's idea. Lacking a better one, I agreed. I must have regretted it fifty-five times, at least once for every hour I spent working on the talk in the six days leading up to it.

But in the end I enjoyed myself. Crazy but true. I would even recommend the experience, but only on the condition that you are allowed to hold your pets during the entire presentation: 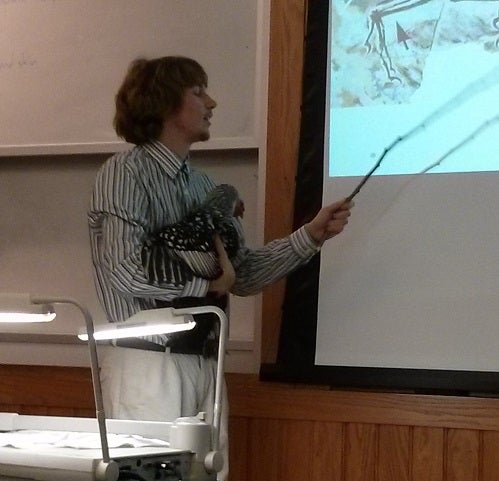 I didn't mean to hold the animals while talking about their phylogenetic histories and such. I meant to lift them out and put them on the document viewer while talking about specific adaptations. But standing up in front of expectant faces with 45 slides to present, it only seemed natural to reach for the rabbit right away. 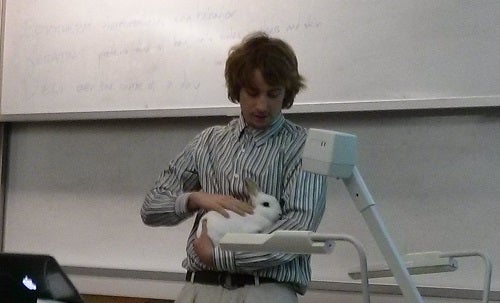 It also helped that the audience was composed of my housemates, two of my favorite professors, my lab partner, and sundry friends. So I got through it. And it was fine. Even when my Gallus gallus specimen launched herself off the podium and onto the floor, where she attempted to eat my winter hat. The laughter was friendly, and the presentation moved along.

I finished the semester off strong and my animals and I have all been happy at home. Meanwhile, winter has come — with a vengeance — and my animals, along with the rest of Oberlin, have spent the snowiest days huddled inside. If they were to venture out, though, they'd be well-equipped! I think it's fascinating how well they cope, and I'd like to share a little of my research with you. We'll start with the rabbits, who are mammals. Mammals diverged from reptiles fairly early, around 200 million years ago, while snakes and lizards diverged from other reptiles around 170 million years ago, and birds around 150 million years ago. The relationships look like this: 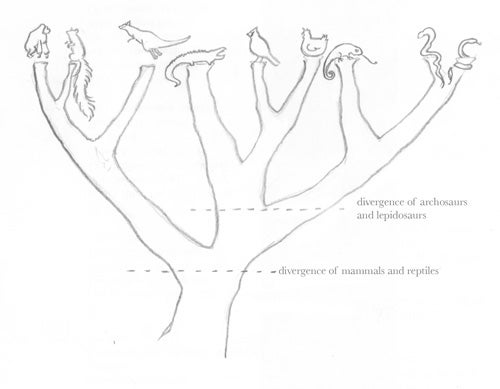 That doesn't mean modern mammals are more primitive than modern snakes, of course. Extant species are all equally evolved -- as products of the same ancestral population, we have all had exactly the same amount of time to survive and change. I could write a lot more about relative evolutionary time, but I'll spare you, especially because I don't understand it fully myself and tend to talk in big circles. So, on with the rabbits!

Rabbits and hares have several excellent adaptations for winter life. For instance, unlike dogs and cats, rabbits have no pads on their feet to catch ice-balls in, but instead solid fur: 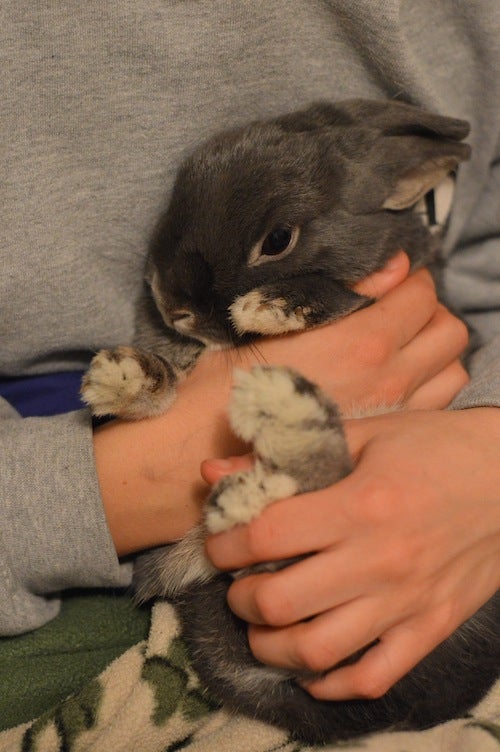 European rabbits' social structure also helps keep them warm. They don't hibernate. Instead, they spend much of the winter in their large warrens, which are usually about 3 meters deep -- well below the frost line. They emerge to browse what little they can find and don't seem to suffer much for the snow.

Two of my own rabbits are even white, like their cousin the Arctic Hare. It's a coincidence, though. We all know why arctic animals are white, but whiteness in domestic animals is not as well understood. In 1998, Temple Grandin speculated about the correlation of white coloration with tameness -- and nervousness and behavioral disorders. (In this later article, she differentiated further between whiteness and depigmentation. It's a good read if you are interested in domestication or animal welfare.) Anyway, like the albino squirrels, Winston and Peter would stand a good chance of not being eaten by a hawk immediately. However, I'm not risking it.

Instead, curious about their response to snow, I brought some inside: 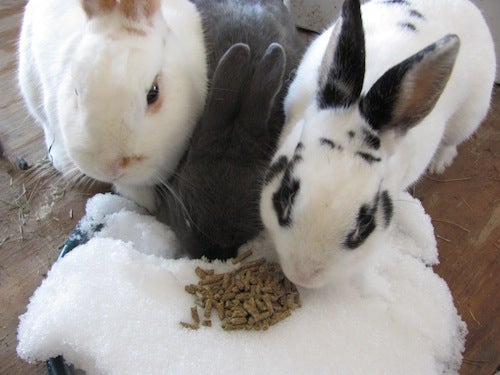 Results of experiment: inconclusive. It certainly didn't distract them from the food.

I also put some on a plate for Joan to see if she would investigate. She didn't, but it's probably because she's just been fed, and is busy digesting on her toasty 84-degree basking pad.

Joan herself probably couldn't survive in Ohio -- her species' range extends only as far north as Virginia. A few other snakes manage, though. Garter snakes, for instance, have an immense range, from Florida to northern Alberta. They may travel more than two miles to find a suitable hibernation site and often hibernate in groups. Unlike mammals, they don't "sleep" the winter away.1 They are apparently fully conscious, but their metabolism is so slowed-down that they don't need to eat. Some reptiles, like certain species of turtle, don't even need to breathe. Painted turtles can survive without oxygen for months.

The chickens are the only folks allowed to brave the snow, and I'm sure if I were willing to put food scraps out in their coop instead of the compost pile, they wouldn't bother. Here they are, though, tempted outside by a liberal application of corn: 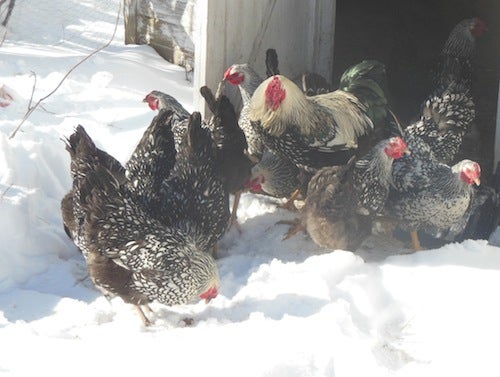 And here's one hen braver than most: 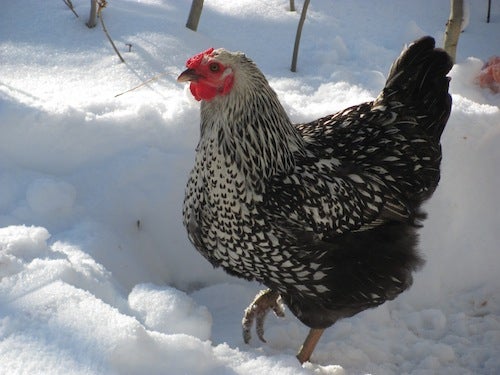 Doesn't her foot look cold? Don't worry — heat loss is controlled by an amazing system called the tibiotarsal rete. The main artery of her leg is surrounded by a dense network of veins. Heat dissipating from the warm blood coming from the chicken's core is absorbed by the cool blood coming from the feet, which is whisked back up into the warm core. This prevents that heat from being lost to the air and ground. In truth, her feet probably are cold — but her core is warm. Tonight on the roost, she'll sit on their feet and her feathers will cover her legs. 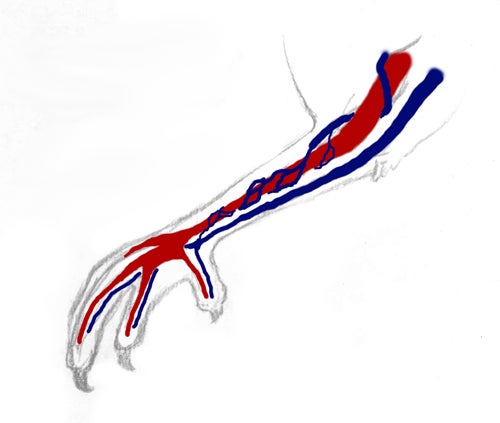 A crude representation of the vascularization of the chicken leg, showing the network of veins around the artery and the alternate vein. Based on a figure from Midtgård's seminal 1981 paper; contact me for a copy.

Bird feathers are miraculous things. A bird's coat of feathers can weigh as much as its skeleton, and it devotes a lot of mass and a lot of energy to building and maintaining them. This investment pays off: if you ever spill a drop of water onto the back of a chicken, you'll see it roll right off. Most folks know that underneath is a layer of warm air trapped in the insulating down. There are special feathers for this purpose (called downy feathers, naturally) in addition to the downy layers of the contour feathers. Many people don't know that feathers don't grow all over the body, like fur does — instead they grow from areas called pterylae and cover naked areas, like so: 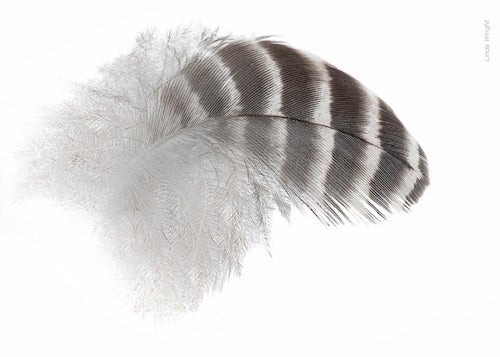 Figure from Mewaldt 1958; contact me for a copy of the original

If feathers are so great, why don't most birds have feathered legs? The scales on a chicken's leg are called scutes, and new embryological evidence implies that they may actually have evolved from feathers rather than the other way 'round. Because they're not ancestral, the odds are good that they serve a specific adaptive function. One obvious advantage of naked legs is for heat dissipation, probably useful for chickens' jungle-dwelling ancestors. Another, more applicable to our climate, is the lack of feathers to get wet. Wet foot feathers are a terrible thing, and can even freeze chickens to the ground.

My personal pet speculation is that feathered legs are only adaptive if they're not likely to get wet. Grouse, for example, have feathered legs and feet, and they tend to live in climates where they are likely to encounter dry, powdery snow, but not cold water. Some of their close relatives have naked legs. I wonder if they are more common in swampier areas? Unless anyone really wants to do a comprehensive literature search on galliform feather patterns, we'll all have to wonder together.

I do know about chickens, though. My particular chickens are well-adapted to the cold. They're called Wyandottes and they're known for winter-hardiness. Not only do they have naked legs, they also have small combs, which reduces the risk of frostbite. And famously fluffy butts! 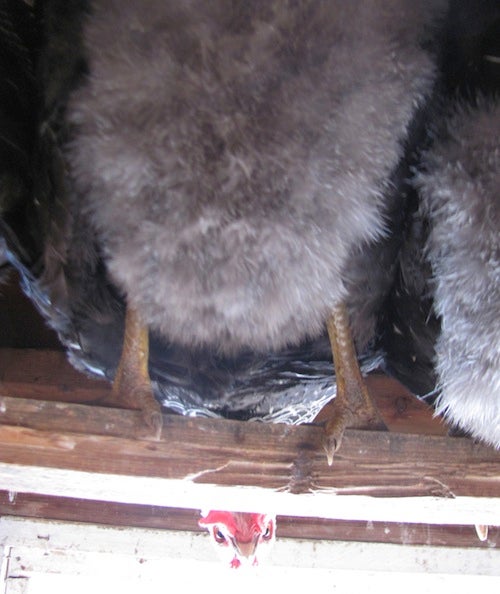 I think a picture of a chicken butt is an excellent note on which to end. If you're curious about other cold-weather adaptations, or about the evolution of endo- and ectothermy (which was actually the focus of my talk), or want access to some of the research I mentioned above, please leave a comment!

[1] It turns out that mammals aren't sleeping the winter away either. Thirteen-lined ground squirrels, the model hibernating mammal, have been shown to come out of hibernation to sleep and then return to hibernation.

I only like blogs that talk about and show pictures of bunnies and chicken butts. Finally I found the perfect blog!

Props for the chicken butt joke. I giggled.

I'm really sorry I missed your in-person presentation, but I think this blog post wrapped it up beautifully. I do appreciate that you did a mini-experiment with your rabbits to see how they would react to snow, and I really need the warm-core thing going on with your chickens' legs to keep myself warm, too.

Love your new blogs; the bunnies look healthy and happy.
Hope to get goodies off soon - life around here is crazier than usual.
Love,
Nana

grouse, in cold weather, develops special feathers that extend down its beak, covering its nostrils, allowing the bird to breathe in warmer air in cold weather.

Ruffed grouse have other physical and behavioral characteristics that help in winter. In September, fleshy projections – pectinations—begin growing on the sides of their toes. These comb-like nubs, which fall off in spring, increase the surface area of the foot. Working like snowshoes, they allow the bird to walk across snow with less effort. Pectinations also give the grouse a better grip on an icy branch where it might perch while feeding.