Note: This is my old livejournal entry from when I visited for All Roads as a prospie. I edited it a little bit so I could still hang onto an iota of my pride.

Wiggle your fingers: it is 2005. I, Aries, have super-long hair and wear a green military coat. I don't sleep enough, drink too much Diet Pepsi, and like the Zombies, Queen, Blind Guardian, and Dream Theater. Oberlin is my last college visit...

Oberlin Visit
Wow. I feel like I lived a week in two days. I went to 6 classes, 3 lectures, a movie, and 3 concerts. One thing, then another, and another. It was craziness.

I arrived at about 1:30 for a panel on student life, then took a 2:30 tour. The tour lasted a really long time; weird, as it isn't a ridiculously huge campus. The buildings are in all different styles. There's a disney-style castle, two buildings that look like radiators, three gyms, and a giant stone-grey library that looks like someone took a few bites out of a concrete block. It didn't look as pretty as, say, Yale, but it wasn't as weirdly-communistic as OtherCollege.1 I guess I'm weird, but I'm not that attracted to standard dorm buildings. They're functional, just... meh.

Oberlin the Town is quaint: think "Little Town" from Beauty and the Beast. Bookstores, coffee, beads, clothes, cafe, asian fusion food. There's only one bar, which is pretty cool. Weird thing: everyone is super friendly. Like related-to-you friendly.

Town and College are right-smack-next to each other, joined by a huge green park called Tappan Square. On Thursday, Tappan Square was budding, blooming, and colorful. Friday, it was moist, and very green. Saturday, it was rainy, brown, and spitting up mud when I walked through it. (Apparently, there was snow last Sunday. Snow. in April. Why? Why, in all things holy?) The weather here is supposedly crazy, but it was just really damp when I was here. Oh well.

Classes I sat in on:
Toni Morrison, Religious Narratives, English Literature, Science and the Mind.

English Lit:
This teacher (Jen Bryan) is the shit. She's really energetic and excellent -- the class discussed pronouns: thou vs. you. At the beginning of class, we saw Kenneth Branagh and Emma Thompson in Much Ado About Nothing doing a scene where the thou/you distinction was used to show respect and later, offense. She mixed lecture and discussion really well -- everyone seemed really engaged. 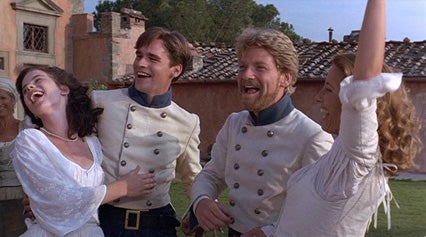 Toni Morrison:
I feel pretty dumb for going. The class was discussing a book I hadn't read (Jazz), so I was confused for 90 minutes. They made good points, I guess. There were 12 people in the class, some of whom talked a lot, others of whom talked once or twice. The quiet ones made smarter statements, which made me feel weird, because I'm always so... talky in classes.

After going to classes, I went to a Poetry Reading in the environmental studies building (so, so, pretty, zomg):
Poet 1: Nature poetry. Pretty. I don't get nature poetry, but it was good.
Poet 2: Powerful, intimate, brutal, otherworldly, brilliant. They talked about a trip to Tibet where they wrote amazing poems about incredible people. I don't think I could ever write in this way, but it was cool to experience it.
The audience was really large and supportive.

MUSIC -- Three concerts in three hours!
So, this weekend was a Queer Hip-hop Conference (!!!), confirming proof that this school is ridiculously cool. I went to Dorian Roberts and Deep Dickollective, who were both phenomenal performers.

Take your standard lady folksinger: guitar, soft, sweet voice. Now, make her bitter, African-American, and queer. Dorian Roberts was awesome. One of her numbers involved singing over part of an Angela Davis interview. And then, there were a series of bitter love songs. Lady had bite.

Deep Dickollective was "homo hiphop." I cannot express how brilliant and hilariously they sent up hip-hop culture, which is almost virulently heterosexual. They had lyrics like...

"Sorry, Mrs. Jackson, I f**ked your son.
Never meant to make you go and cry.
I thought he told you
that he was bi." 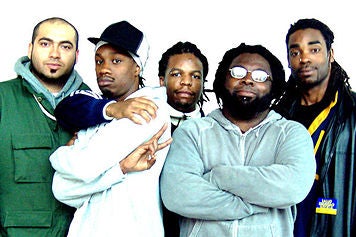 Bring That Beat Back

Organ Pump:
Midnight. Church. Organ music. You sit in the pews and feel the vibrations. Will was the emcee/Preacher, who led a prayer blessing staplers and lawnmowers. He was amazing, combining wacky hijinx with a plain style of joke delivery... in between organ pieces.

"This is a pulpit. Do not mock the man in the pulpit, even if he wears a funny hat."
- Will2

Oh, it was GREAT. I lay down in the pew and just listened. it was over far too soon.

- The vegetarian/vegan co-op is party central. Pizza night was amazingly fun. I don't even like pizza... and I liked this pizza.
- Co-ops: Work Will Make You Fed.
- Obies are oddballs, but very authentic and friendly. I fit in well.
- I ran into an Aikido guy in between a 14-hour practice. He had stopped by the dorm for a beer, a sandwich, and a redbull.
- I want to go here. I could actually live here and be really, really happy. Everyone I met is super-positive and kind.

1. Smacktalk on other colleges is lame.
2. Will and I dated in my freshman year. He's an organ performance/computer science major, now in law school. And an all around excellent guy.

Sounds wonderful =D This is a great post! I felt the same way as your prospie self last week- and I'm SO excited to actually attend Oberlin!

I was actually creeped out at how much I loved Oberlin. It's like we went out on a first date and decided to get married the next day.

I'm glad you liked it! What stuff did you see while visiting?

As someone who (regrettably) did not have the opportunity to visit Oberlin before applying/enrolling, this post was very nice to read. I can't wait to move-in!

I'm glad! I applied without knowing a bit (it had a creative writing department and music - sold!) but visiting really sealed the deal.

Moving in is pretty fun. Orientation is summer camp, more or less, with some academic information. You meet a lot of super-cool people, you sign up for classes, you eat ice cream. It's great.

Are you up to anything for the summer?

What Happens After You Press Submit?

You’ve put in the work, but now comes what some argue is the hardest part — waiting.