Memorial Day weekend requires considerable multitasking on the part of faculty members. On one hand, there are dozens of events--open houses, performances, parties, and so on--all leading up to the Commencement ceremony itself on Monday morning. It's a time to say goodbye to the seniors, meet their family members, and (sometimes) help them negotiate the often bittersweet process of leaving Oberlin and heading off into the next phase of their lives. On the other hand, on the same weekend hundreds of alumni flood back into town for their class reunions, also involving multiple dinners, receptions, and programs. The crowded schedule is all a bit dizzying, and I always have mixed feelings, since there's never enough time to spend with all the people I'd like to see.

On the whole, though, the overlapping events of commencement and reunion provide a very good balance to each other, since the inevitable melancholy of saying goodbye to the graduates is offset by the pleasure of reconnecting with old friends. I'm always especially happy to be reminded that, even with people I haven't seen for a long time, there's usually a bond among Oberlin grads that allows us to pick up the conversation in a meaningful way remarkably quickly.

This year there were three groups of my former students back for reunions. (Reunions are scheduled at five-year intervals, but not every class comes back every five years. The pattern is apparently determined by a secret formula known only to the alumni office.) I enjoyed seeing several members of the class of 1983, back for their 25th reunion, but I spent most time with alums from the classes of '02/'03/'04 (5th reunion cluster) and '87/'88/'89 (20th reunion cluster). Since I often hear questions from prospective students about where a liberal arts education can lead, I thought I might use this blog to introduce you to a few representative Oberlin alumni.

The following wonderful people are all graduates from the class of 2002. They all took literature classes with me, and they were all also Creative Writing majors. Perhaps not surprisingly, six years after graduation they are all seriously pursuing writing. 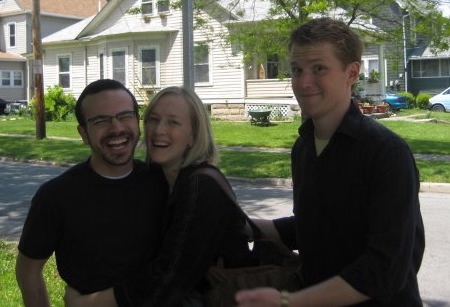 After graduation Doug, on the left, worked for Poets & Writers magazine in New York. He's now enrolled in the MFA program at UNC Wilmington, concentrating on creative nonfiction, and working as an editorial assistant at Ecotone, a literary journal about the environment and the natural world. Edan, in the center, earned an MFA in fiction writing at the University of Iowa, and was actually in residence in Oberlin all spring, teaching two sections of "Technique and Form in Fiction" for the Creative Writing program. You can read her prize-winning story "Animals" here. Edan has now returned to Los Angeles to work on her first novel. Ryan, on the right, has pursued both teaching and writing since graduation. He earned a secondary teaching credential in English from Mills College in the Bay Area, then moved to Krakow, Poland, and St. Petersburg, Russia, to teach English as a Foreign Language for two years, then returned to St. Louis to pursue substitute teaching and freelance journalism. He started a blog about living in the Midwest --ironically, as it turns out, since he's just about to move to Philadelphia. 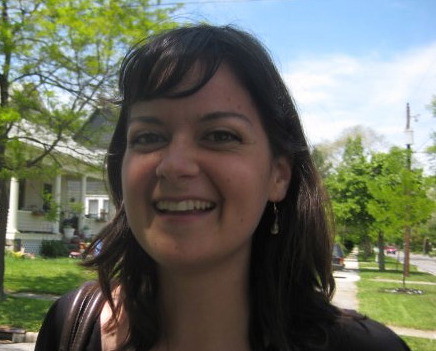 The fourth member of this reunioning bunch, who wasn't in the first photo because she was taking it, is Molly, who earned an MFA in poetry writing at the University of Montana, and is now living in a small town on an island off the coast of Maine, farming and teaching writing at a community college (as she says, "one hand in the ground and the other in words"), and writing terrific poems.

What's really interesting to me is that, while those relatively recent graduates are all pursuing activities that might have been predicted from their college majors, the lives of those from the 20th reunion with whom I had dinner have taken a decidedly more surprising trajectory. The first two of the following studied with me on the Oberlin-in-London Program in the fall of 1987, and all three acted in Shakespeare productions that I directed: 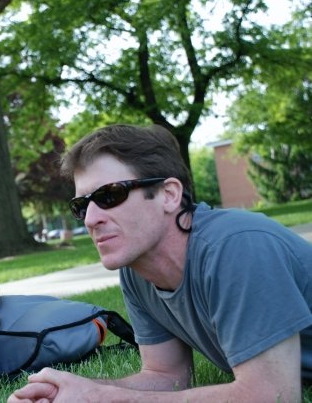 Sam was an English major who won a Watson Fellowship to travel in Europe studying theater in his first year out of Oberlin. He found himself especially drawn to mime and nonverbal theater, and developed a particular passion for the circus. Although he'd had no previous circus experience, he began to train as an acrobat, eventually becoming expert enough to tour the US for two years with the New Pickle Circus, and then toured the world for five years with Cirque de Soleil. He and his wife Sandra Feusi now have an award-winning act, Vertical Tango, based in San Francisco, doing things like this: 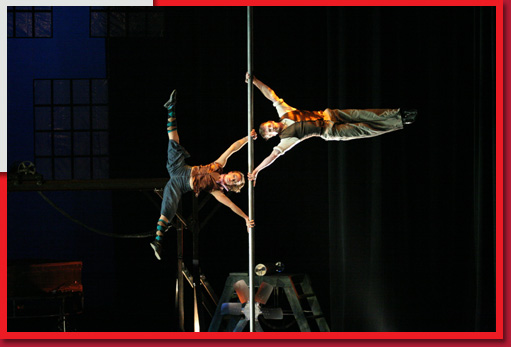 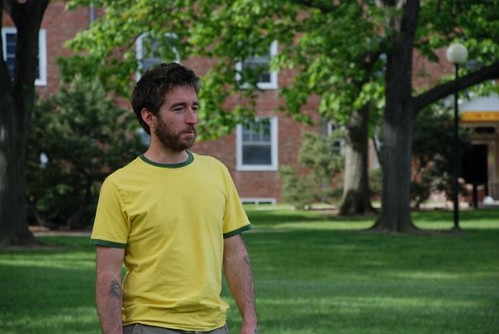 John majored in English and math. After graduation he worked on Wall Street doing complex mathematical modeling for an investment firm, then moved to upstate New York to work as a freelance consultant and help raise his sons, and now works as a freelance software engineer, writing music production software programs such as Reaper and Olga. 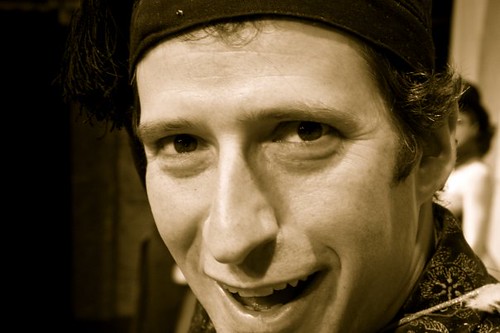 Since Adrian graduated with majors in politics and religion, he has spent many years as an actor, primarily in Chicago, and professor of physical theater at Roosevelt University. He is now artistic director of 500 Clown, a theater troupe that uses circus arts and improvisation to produce wildly physical reimaginings of the classics, including 500 Clown Macbeth and 500 Clown Frankenstein, in which he does things like this: 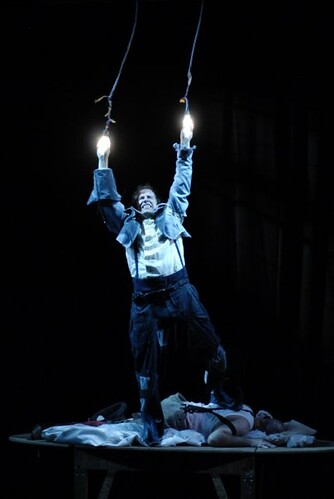 So does all this mean that six years after graduation you'll be working as a writer/teacher, and twenty years after you graduate you'll either be an acrobat, a software engineer, or a clown? Well, hardly. This is far from a statistically significant sample I'm presenting, just a handful of friends of mine. What I think it does demonstrate is the kind of creative and resourceful students who are drawn to Oberlin, and the facts that life is unpredictable and that a liberal arts education prepares you to make entrepreneurial life choices. So once you've graduated, please come back and let us know what you've been up to!