Note from Ma'ayan: Our second alum from beyond has returned to the blogs with a post-Oberlin update. Alice Ollstein '10 is here with some dispatches from DC!

I've always been a worrier. I worried about choosing Oberlin, which I realized was silly the minute I arrived freshman year to an explosion of color and music and new ideas. I worried about moving to Washington, DC, after graduation with only an internship lined up and few friends. I still worry some today, even though I've found the best friends and romantic partner a gal could ask for, had incredible work opportunities, and have learned much, much more than I ever did in the classroom.

To an outside observer, my path has been fairly straightforward. Right after graduating, I moved to DC and started my reporting career. 5 years later—after several layoffs—I'm still in DC and still reporting. But it hasn't felt so linear. One of my recurring worries, fueled by friends' travel blogs and exotic photo feeds, is that I'm not having enough "adventures." In moments of doubt I worry I'm wasting my 20s toiling away at work while others are out saving or changing or being changed by "the world."

Thankfully, I have learned to tell that voice to stuff it. All life is an adventure, and moving to a new city, building/finding a new community, and scrambling to make it in a uncertain field definitely qualifies.

I'd love to tell you about my adventure-so-far, and some of the things I've learned along the way. 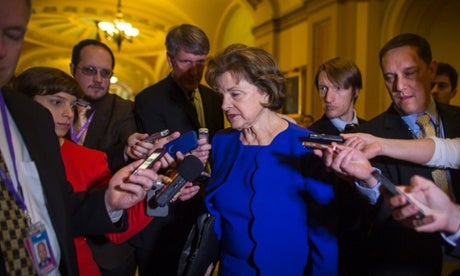 Me (in the bright red dress) interviewing California Senator Dianne Feinstein minutes after she accused the CIA of spying on her staffers as they tried to investigate torture. Picture from The Guardian.

Reporting for radio, TV and newspapers on and around Capitol Hill has been a wild ride. I've been able to question members of Congress, sit in on some of the biggest Supreme Court cases in my lifetime, and track world-changing movements as they develop.

But I didn't get to do those things the moment I arrived. I started out interning at National Geographic, whose weekly podcast was run by a fellow Oberlin grad at the time. I didn't get to do any reporting, but I did learn audio editing and recording techniques and had a wise mentor who helped answer many of my questions and worries. I also got to edit interviews about tigers and scuba diving, so hey, not bad at all!

When my internship ended, I got a job with a small, independent radio outlet that produced stories from DC for NPR stations all over the country. I loved learning about Congress' bizarre rules, getting some one-on-one coaching on my voice (I sounded like a breathy teenager at first. Stations actually complained) and getting to know the power players in town. Several months later, I skipped into work one day and was told to turn in my press pass and find a new job. It wasn't me, they said, it's just a money crunch. This was not the last time I heard this, but since it was the first time, it was painful and terrifying. Suddenly, I had no income.

I threw myself into freelancing for the next year and a half, cobbling together enough clients to pay the rent. In order to survive, I had to learn very quickly to constantly come up with new, unique story ideas, and pitch them convincingly to skeptical editors. In many ways, it was better than a full-time job. I only worked on stories I liked and cared about. I got to know new radio shows and websites I had never heard of before. I made my own schedule and could take time off whenever I wanted to. But every month was a financial scramble, and I had to supplement my income with dog-walking, transcribing long videos for a local TV reporter, and working weekend evenings at a 24-hour radio station (goodbye, social life).

I had to make some tough decisions during this time, the toughest being rejecting an unpaid internship with NPR—the holy grail of radio journalism. Not only did I need to support myself, I felt I should be paid for my labor on principle, and wanted an employer who agreed. I also knew that I'd be happier doing on-air work at a lesser known organization than logging tape/getting coffee for famous anchors. (I later felt vindicated when a former NPR intern confessed to me at a party that his time there was 85% drudgery and 15% brilliance. And no, he didn't get a job at the end of it.)

After months of uncertainty, the clouds parted and the sun shone on me and one of my freelance clients, Free Speech Radio News, asked me to apply to be their new, full-time Capitol Hill reporter. I got the position, and began one of my biggest adventures: reporting for an independent daily, national radio show. The editors there had the highest standards for ethics, accuracy and plain old quality reporting that I had ever experienced. They encouraged me to seek out under-represented voices, go after stories ignored by the mainstream media and call out those in power when they made false or misleading statements. I loved every minute of my more than 2 years at the job, and especially loved that my family back in California could tune into their local Pacifica station every day and hear my reports. I also loved having several current Obies come join me as interns during winter terms and summer breaks. 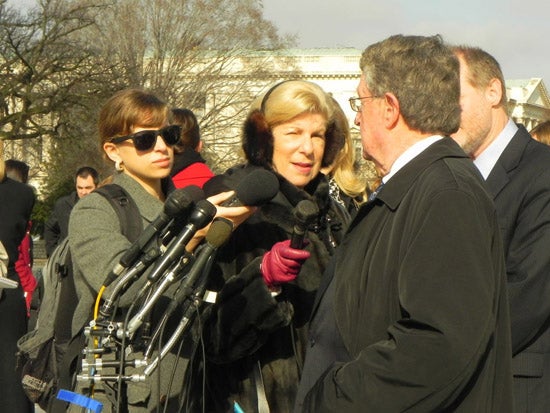 Me and NPR's Nina Totenberg interviewing lawyers outside the Supreme Court after they heard arguments about buffer zones around abortion clinics.

Unfortunately for me and for the news-consuming public, Free Speech Radio went out of business last fall. They're currently struggling to relaunch, but they can no longer support a full-time correspondent in DC.

Luckily, the very day I lost my job, I was offered another one with an independent radio and TV news agency that sells stories to clients around the world, including Radio New Zealand, Channel News Asia, Telesur and Al Jazeera. I walked into their offices and convinced them on the spot to hire me on a trial basis, which turned into nearly 9 months of challenging and exciting work. I learned how a TV script is different from a radio script, how to edit video, and how to put on eyeliner (shockingly, not something I learned at Oberlin). 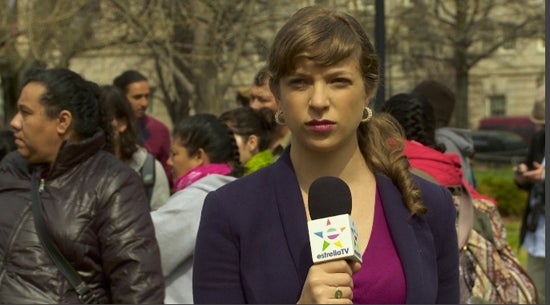 Reporting on a rally for immigration reform outside the White House.

I got to report on issues as personally familiar to me as student debt and as foreign to me as police brutality.

It was fantastic, with a lot of one-on-one training, but as with the other small outlets where I've worked, I had to deal with the instability and constant specter of layoffs. So this month, I'll be starting a new adventure as a politics reporter for the news website ThinkProgress. I'll be traveling around the country covering the midterm elections and reaching a much bigger audience than I ever have.

I had a chance to reflect on all this at the Oberlin reunion in May, when I took a few hours out of mainlining Feve tots and Slow Train coffee to talk about some of these experiences at a panel I put together with other alumni journalists called The Other Side of the Story. 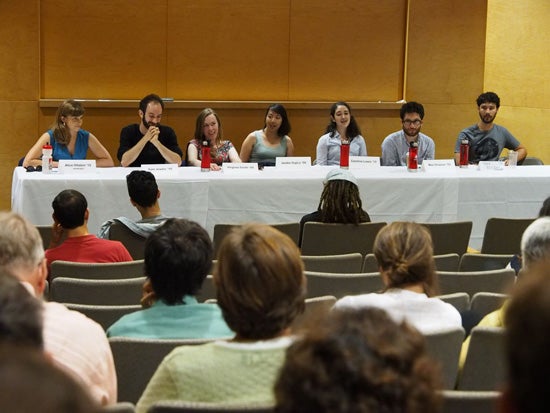 It was an event that really drove home for me that there's no right way to be a journalist or, for that matter, a young graduate. Some of us went to graduate school, some of us jumped right into the rat race. Some freelanced, some did unpaid internships. Some moved to their dream city and hunted for a job there, others went wherever they were offered a job, be that Nebraska or Egypt. As with most events involving Obies, it was incredibly inspiring and thought-provoking.

Lastly, I do want to say that while I've been a workaholic, I've also tried to lead a full life. Along with two other Obies, I formed a social justice book club that has met monthly to discuss everything from rethinking recycling to the history of women's health to the future of the Internet.

I also joined a local organization that encourages more women to ride bicycles and become advocates for better bicycle infrastructure. With their support, not only have I become a year-round bike commuter (even when it's below freezing or awfully hot), I worked up to completing my first century—riding 100 miles in a single day. 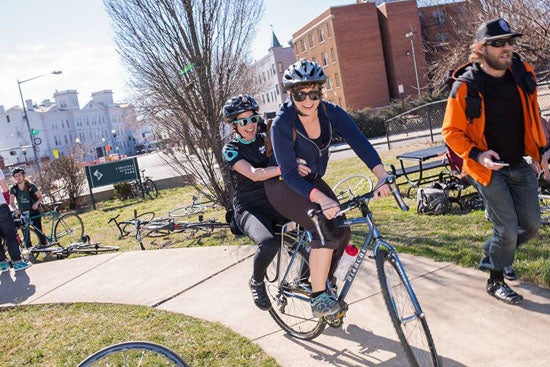 Completing a challenge in an all-women bike race with my buddy Allison. One of my only Oberlin regrets is not learning how to fix my own bike at the Bike Co-op!

Now that the days of constant job applications are (hopefully, at least temporarily) behind me, I hope to devote more attention to other goals, like learning to grow and preserve my own food, volunteering in my community, and being the best auntie in the world to my baby niece and nephew. Maybe I'll even get around to some of that world travel I've envied so much.

I can't wait to see what comes next, for myself and my fellow Obies. If anyone has questions about Oberlin, DC, journalism, bikes, etc. I'd love to chat!