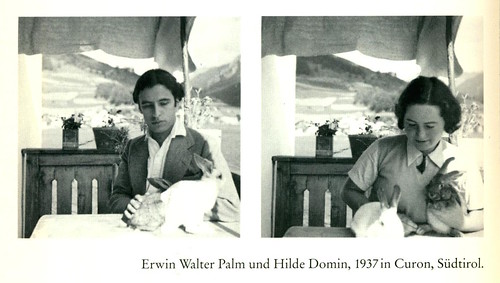 Definitely not trying to bait you into reading a long post with a photo of Domin cuddling some bunnies in Italy. Also this definitely wasn't my facebook cover photo for a while...

1. On Finding Sources
I documented the research stage of my capstone pretty thoroughly on the blogs, but if you don't feel like clicking around, here's a re-cap. The research for my capstone began about two years ago, when I discovered the collected poems of Hilde Domin, a German-Jewish exile writer, in the library and decided I'd like to translate some of them. Domin wrote about exile and homecoming, estrangement and love, instability and optimism, all in a language that was once used in an attempt to very literally negate her existence. Her words spoke to me in a way I had never experienced with German literature. They grabbed me, and didn't let me go.

Fast-forward to winter term of this year, when I decided to spend the month doing research on exile literature. I found many of the sources I'd ultimately use in my paper during the winter term, mostly by just searching very general terms - think "exile literature" and "German literature post-1945" - to find relevant books and articles on engines like JSTOR, OBIS (Oberlin's library catalog), and OhioLink. Once I found relevant sources and actually started reading them, I found most of my other sources through their footnotes and citations. I spent most of that month clicking through catalogs, reading, and taking notes on a massive google doc and by the end of it, I decided to focus my capstone on Domin. That required finding more specific sources, which I did through similar means during the spring semester.

The rest of my sources popped up in more unexpected ways: in classes or meetings with professors, in pleasure reading, and from just browsing the stacks. If I had to give one piece of advice on doing research generally, I'd say that you never know where you're going to find something relevant to your research, so keep your eyes and ears open and tell the people around you what you're working on. You never know who or what will be able to help you out. 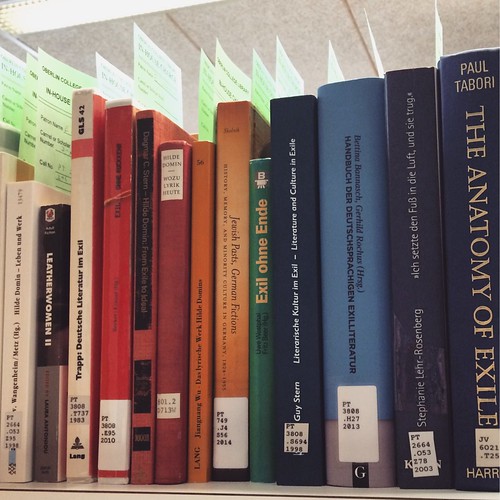 Some books I used, some books I didn't (including a paperback called Leatherwomen II that someone kindly put in my carrel)

2. On Writing
In one of the posts I linked to above, I said that I was hoping to start writing in the first weeks of the semester. That didn't end up happening. I actually started to write during spring break and turned in my first draft to my advisor, Elizabeth, in early April. That draft was nowhere near complete. I only had a bit of prose, bullet points, and a few translations I was thinking about including - 15 pages altogether. Frankly I was pretty worried about where I was at and was unsure about how to progress, but Elizabeth was very helpful. She liked what I had, or at least she said she did, and suggested that I figure out where I was headed by continuing to write in prose rather than trying to plan my paper. She appreciated that my academic writing is based on a sort of meandering, question-and-answer style and encouraged me to use that style to figure out what I had to say. I don't really like planning my papers too much, I just assumed that I was "supposed" to do for my capstone, so I appreciated that she basically told me to do what I know how to do.

It was around this meeting with Elizabeth that I had to start preparing for the senior symposium, which forced me to condense everything I had learned into a 12-minute presentation. This made me to figure out what I found most important and interesting in Domin's writing and got me more energized about writing my paper than I had been all semester. That meant that the vast majority of my capstone was written in the two weeks between the senior symposium and the day my advisor and I decided I'd turn my capstone in. Not exactly ideal, I'm sure there are a few more typos in it than I'd prefer, but I think it worked out. 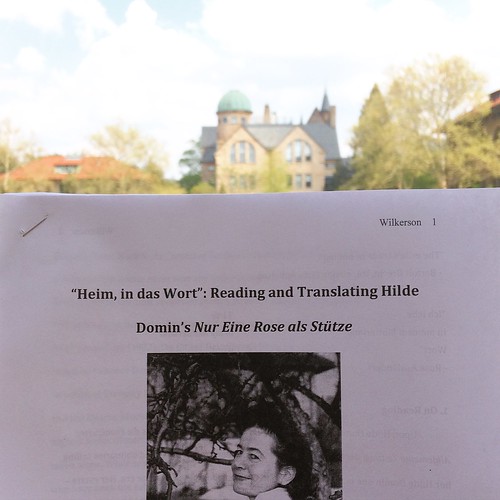 One of the most satisfying moments of tis semester: stepping out of Mudd with my finished capstone in hand

In the end, I called my capstone, "Heim in Das Wort": Reading and Translating Hilde Domin's Nur eine Rose als Stütze. Nur eine Rose als Stütze or Only a rose for rest is the name of Domin's first book of poetry and "Heim in das Wort" is a phrase from one of Domin's biographical essays that means, "Home into the word." Because I am terribly pretentious read a lot of things written by smart people that I wanted to include in my paper, I actually included two epigraphs. To be fair, though, they are really great epigraphs. The rest of the paper is divided into three sections: 1. On reading, 2. On translating, and 3. Translations and originals.

In the first section, I analyze the use of language in the poem "Nur eine Rose als Stutze" and read it in the contexts of exile, homecoming, and the literary and political climate of post-war Germany to show how I understand the book Nur eine Rose als Stütze to be a work of resistance. In the second section I briefly explain my goals in translating Domin's poems, which are essentially to convey her relatively simple style and beautiful images clearly without smoothing over any eccentricities or making anything seem unnecessarily "foreign" or "translator-y." In the last section I include four of the many translations I've done along with the original poems for comparison. All told that adds up to 36 pages, including a title page and two full pages of citations - much more than I anticipated, especially since my essays usually end up at the low end of page requirements.

3. On Sharing
At this point I think there are two people who have read my capstone in its entirety: my dad and me. I've sent it to a few other people, including my advisor of course, but I doubt they will have time to read it until after finals are over. So luckily, I had an earlier opportunity to share my work, namely the senior symposium.

The symposium is basically an outlet for Oberlin students working on honors or capstone projects to share their research with the wider community. Seniors apply in the middle of second semester with a tentative title and research question. Then the accepted students are grouped into panels, usually of three presenters. In theory the panels facilitate connections between disparate research topics. In reality you can end up with a panel like mine that tried to find connections between a comp lit capstone on exile literature, a medieval studies thesis on Dominican friars in Ireland, and a musical studies capstone on hip hop in Dakar. You can probably guess how that worked out.

Even so, I still feel like I got a lot out of my panel and the symposium as a whole. Listening to my peers talk about topics from 20th century opera to Shakespeare to obstetrics was fascinating, and while I might forget the details of what I heard, I feel like I learned a lot about what makes a successful presentation. Not that I was actually nervous about giving one myself. I'm lucky enough to be the type of person who loves giving traditional, stand at the podium-style presentations. Something about being in front of a room with a captive audience makes me feel like the smartest, funniest person in the world. My only real worry was that no one would have questions for me after I was done. As it turned out, there were too many questions for the amount of time we had, which was quite gratifying.

Presenting at the senior symposium was a great reminder of how research and scholarship are not just about sounding smart or making good points. It's about making connections, between disparate sources and ideas and the separate worlds of your subject and your audience. It's about learning why something matters to you, maybe something that's entirely separate from your daily life, and convincing other people, without any distortion or twisting of facts, that it should matter to them too. I like to think that for at least for those 12 minutes, I was able to do that. 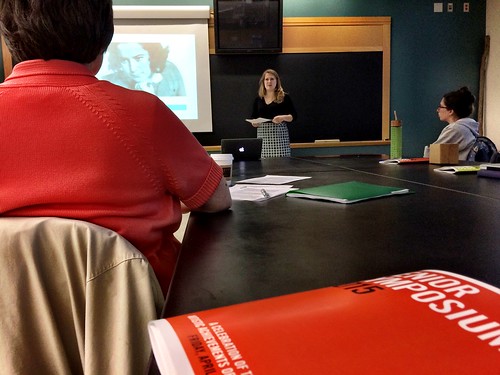 If you read this far and have any questions, about my research or research in general, please ask them in the comments. Also, some people have already expressed interest in reading my capstone. If that's something you'd be interested, let me know!

I WANT TO READ THE THING

Just for the record...I read it too. It was awesome.

Emily, I'm really excited for this research! I'm also mildly sad we didn't get to have conversations about research struggles and presenting months of work in a few short minutes because I think that is valuable dialogue as well.

Anyway, I'd love to read your paper if you want to send it my way :)

Ida: THANKS. I'll send it to you guys today!

Alex: That struggle is so, so real. It would've been nice to be able to talk to you about it, but I think the reason we weren't able to do that makes it ok. And I'll send it to you today!

Thank you so much for writing about your sources! You actually explained how I've been exploring my own reading and research for things related to work (and also things related to my other interests): if something I'm reading/listening to mentions someone else as a source, that ends up on the list. It's not everything, but it's a great start in the right direction. (When I think back to the pre-Google days of information, this is how things worked, right?)

ALSO everything you said about making connections between different sources, ideas, discoveries. That's what I don't think I realized about research in the humanities until I heard it embodied during senior symposium, two years after I had accidentally assisted in research through program development in the humanities.

I'm so glad I got to hear your presentation during senior symposium this year, and for the record: I was lured there in part because of the bunny photo happily displayed in this blog post.