One of the fixtures of Oberlin College and Oberlin town is the gorgeous Apollo, a single-screen movie theater right on the corner of Tappan Square. It was recently (like, last semester) purchased by the college to assure its existence in the lives of Oberlin residents and college folks as well. Part of the building will be turned over to the cinema studies department, which excites me to no end. Seeing my movie screening in a real theater? Even more priceless than the movie premiere experience I mentioned earlier.

The Apollo has those tough leather seats that are comfortable for only a certain amount of time, a red velvet curtain that is drawn back at the beginning of each show, and an awesome green lit clock in the corner. It's old. It has its own smell. It's one of my favorite places in Oberlin. Up until this last semester, it screened movies that have been out for a bit, a few weeks behind the big theaters in the nearby area, but at the low low price of three dollars a ticket (two if you went on Tuesday or Thursday!), and only one movie per week.

Under the new management, the Apollo now has two-dollar matinees, is screening a few different movies a week, and they're starting up a great new-old tradition: the midnight movie.

It was kicked off back in April with Hedwig and the Angry Inch, closely followed by The Big Lebowski, Willy Wonka and the Chocolate Factory (the original with Gene Wilder), Monty Python and the Holy Grail, and most recently, a screening of The Graduate during alumni weekend, a mere two days before commencement, the perfect time for seniors to start wondering what they, too, were going to do with their lives.

My friend Chris mentioned in one of the forums discussing the future of the Apollo that her dad loved when Dartmouth had shown The Graduate during a midnight showing the night before graduation. Whether the team at the Apollo took the cue from her, or came up with the brilliant idea on their own, it was amazing.

The Graduate has been at the top of my favorite movie list since the beginning of high school, when my parents bought me a copy for my birthday. It's gorgeous, it's funny and heartwrenching and sing-a-long-able. We watched it in my American Cinema class two years ago, and Pat Day talked about how he saw it at the Apollo, when the movie came out in 1967. I'm sure my dad saw it there, too.

The pickup of the commencement activities started bright and early on Saturday morning, teasing us with warm weather and sunshine to wake up after our 3am bedtime. Seeing the movie was well worth the bleary-eyed beginning of the weekend, though. Simon and Garfunkel had struck the right chord with us. 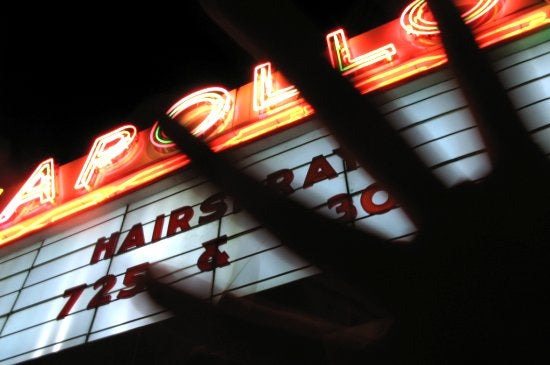 The Apollo sign, taken last fall prior to a screening of Hairspray. Those neons are imprinted on my mind.

The college used to show The Graduate every year during Senior Week. Wonder why/when they stopped...

I was a judge at the dress-like-the-characters midnight showing of Rocky Horror Picture Show, which is now probably terribly dated.