For the past three months, I have been fulfilling a longtime dream of mine: learning to play Irish music. This dream took hold six or seven years ago when I found out that my then-new flute teacher (Dr. Andra Bohnet), in addition to holding myriad other flute-related jobs, plays in a Celtic band called Mithril. I have been madly in love with them ever since, and, like any diehard fangirl, I have also wanted to be exactly like them ever since. Enter the Traditional Irish Music ExCo.

The tale does not start smoothly. I had somehow completely missed this particular ExCo in the overwhelmingly comprehensive list that is released before the ExCo Fair, and had also overlooked its booth at the fair itself, so I only heard about it through a friend when he came to my room after their first meeting and spewed enthusiasm all over the floor. He encouraged me to see if I could sign up late, so I did, and I managed to get my registration in the day of the deadline. (Big props, Aaron Kozloff - I never would have known about this without you!)

As I had missed the first meeting due to my tardiness, I had to learn my first two tunes on my own time before the next meeting to catch up with the rest of the group. This was not a problem. I have a decent ear and I know my way around my flute enough to learn a simple song or two. What did freak me out, though, was when I actually got to the class and realized there are several things about Irish flute playing that differ from classical flute playing. For one, Irish music has a rich and entirely aural tradition, which is lovely but scary for me because barring some early Suzuki training, I've stuck pretty solidly to sheet music in my musical career. For another, Irish flutes don't actually sound like classical flutes. In fact, a good Irish sound is almost the opposite of a good classical sound - classical music values smooth, clear tones, while Irish flutes are supposed to rasp a little, with a full but sort of diffuse sound. (If you think of the purity of a boy's choir as opposed to the growl of a blues singer, you've got about the right comparison in mind.) It took me a fairly hefty paradigm shift to be okay with throwing my deeply ingrained classical values out the window for the purposes of this ExCo.

Happily, once I'd made the necessary mental adjustments, everything went much more smoothly. I discovered that I actually greatly appreciate the lack of written music, because it forces you to build a substantial repertoire, and fast, before you can really jam with anyone. It also forces you to acquire mentors, because the only way to learn is through real live human beings and not old dead sheet music from old dead white guys. Traditionally, the music event of choice is a 'session,' an informal gathering of musicians in pubs that is open to all and not really led by any one person, but has an unwritten etiquette that keeps the ball rolling properly. For example, it's bad etiquette to hog the spotlight, since sessions are cooperative efforts for the enjoyment of the musicians and are not intended as performances. It's also slightly shifty etiquette to stand around silently with a hopeful look on your face until it gets so awkward that a musician has to invite you to join - but apparently, that's just what one of our ExCo instructors did when he started getting into Irish music.

He probably likes to think he's gotten less awkward, but I'm going to have to disappoint him on that one. Every time the class met, there would be an awkwardly hilarious lecture part of the class that involved listening to our two teachers, Brian Lindsay and Alex Sturbaum, make bad jokes at each other while trying to impart knowledge to us in a way they hoped was smooth but was actually just really amusing (sorry, guys). For all their silly banter, though, they're amazing people; the lectures dealt with the history of Irish music, regional styles within Ireland, different types of songs and how to play them, the dances connected to each type of song, and basically anything related to our musicmaking. There was even one particularly memorable class in which Brian revealed to us that he stepdanced competitively for twelve years or so, and then broke out the dancing shoes and cut a mean rug. That man can kick his leg all the way up to his face in time with the music while still pointing his toes. Ballerinas ain't got nuthin' on him.

Brian and Alex also both play multiple instruments (whistle, flute, fiddle, accordion, guitar, banjo, and mandolin, between the two of them) quite well. I'm not entirely sure how all that knowledge can fit into two people's heads, but they did a superb job of cramming it all into ours - so much so that by the end of the semester, we'd acquired enough know-how to put on a rip-roaring final performance at the Cat in the Cream Coffeehouse. We arranged all the songs we'd learned over the semester into a set list that featured everyone in at least one solo, ran through it a few times, and then pulled off a super show (if I may say so myself). People got up and danced to our music! We forced Brian into an impromptu stepdance on stage! It was wonderful. I was exceedingly pleased.

This was a fitting culmination to a full term of growth for us Irish music hopefuls. We started as musicians at totally different levels, from totally different backgrounds, with totally different goals. It took us a few months of hard work and, yes, awkward and goofy raillery, but we ended up a community. If we want to learn some new tunes or jam on some old ones, we know who to call. If we need help with continuing our Irish music journeys, should we decide to do so, we know that we have teachers who will always be willing to help. Brian and Alex, too, grew as instructors and musicians along with us over the course of the class, and if they offer it again, I would highly encourage anyone with rudimentary musical skills and a desire to make some toes tap to sign up for it.

Alex has a sticker on his accordion case that says "If you're having fun, you're doing it right!" I'm fairly certain that this ExCo taught me how to do it right. 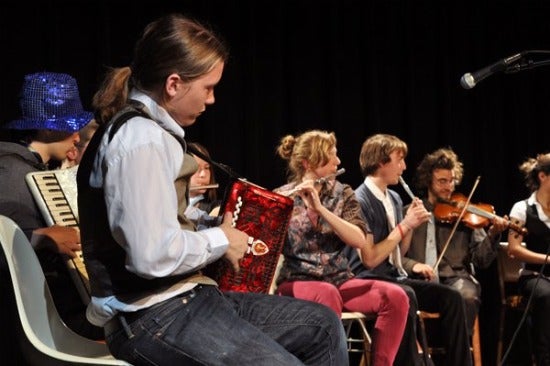 Alex is the one in the foreground; Brian is to my left, on the whistle. Photo cred: the illustrious photomaster Ma'ayan Plaut!

Fun stuff and so glad you are playing Irish music :-) Next time you're home you'll have to come to McSharry's Pub in Fairhope on a Sunday evening for our weekly Irish session. It's epic!!!

Those exist?! I won't be home until Christmas, but HECK YES.

My favorite part of the whole concert (other than the toe-tappingly awesome music) was watching Brian kick higher than everyone's head, including his own, barefoot, on the stage at the Cat.