As I've written before, a part of my motivation for staying in Oberlin this spring was the fact that Oberlin invited Toni Morrison to speak this semester as part of our convocation series. April 23 has been a date firmly lodged in my head for months now, one that I've looked forward to with the wild abandon and enthusiasm of a golden-ticket-toting kid who's been promised a trip to Willy Wonka's Chocolate Factory (a movie which is on my mind only because the Apollo theatre in Oberlin is hosting a midnight screening of it tonight.)

Toni Morrison's Beloved is the only book that I've ever read twice in one week. Four years ago, I helped defend (with success!) the book against a group of parents in my school district who wanted to ban it from our curriculum. I read the whole thing through, mesmerized, and started over the moment I reached the last page. I hit that last page and honestly couldn't stand the idea of not being with her words anymore, words that had seized me, torn at me, put me back together, and reminded me why stories matter in this world. It's definitely the kind of book you have to put down every few paragraphs to let yourself breathe.

Seeing Toni Morrison last night in person and listening to her speak had a similar effect on me. I was lucky enough to get to go to a dinner with her (and a good many professors, administrators, and folks in town) before the convocation speech. It was a fancy affair, and our president Marvin Krislov presented Dr. Morrison with several gifts. One of them included a note from her 91-year-old first grade teacher from Lorain, Ohio - a phenomenal moment to consider that this powerful, Nobel-Peace-Prize-winning, larger-than-life inspiration to me was once upon a time, merely a first grader.

Dr. Morrison spoke a lot about the concept of home - a concept that is so relevant to - well, anyone, but especially those of us who are around college age, where we are in transition periods, in moments of limbo...leaving "home" for perhaps the first real time ever, creating a new home elsewhere, reconciling those landscapes, pondering future ones. My own sense of home has been pretty radically played with over the last four years, complicated by upheavals like parental divorce, my mom moving to a different continent, my dad planning to sell my childhood house...meanwhile, navigating my relationship with the state I came from, the person I have become on Ohio's soil, and where I see myself going from here.

Dr. Morrison said that geography, while not to be disregarded, shouldn't exclusively define home either - but rather, that memories create home, that the concept of home is fluid because of them. The past is not objective, and the future is malleable. "Being human is a big deal!" she said. (Paraphrased, mind you.) "It took sixty million years to make the human eye. We are not daffodils or whales. Humans are radical. Who else will stop to help, to save others, and expect nothing in return? Who else has mercy?"

She spoke, too, of being disinterested in the idea of evil, chastising it for needing to be loud in order for people to pay attention to it. Love, on the other hand, is quiet. It's a powerful thing to listen to someone whose faith in humanity goes so deep - and yet that's definitely something I've taken away from my time at Oberlin, too. People in this community care deeply about each other, believe in one another's dreams, have faith in the goodness of the strangers they meet. Just today, I was reading (what else?) Toni Morrison's Jazz on my front porch, watching Obies bike by in the sunshine, listening to two violinists practicing on their porch across the street...and it was such an incredible moment, to really feel a part of something, of this, whatever this may be - a town, a community, the human race...home? 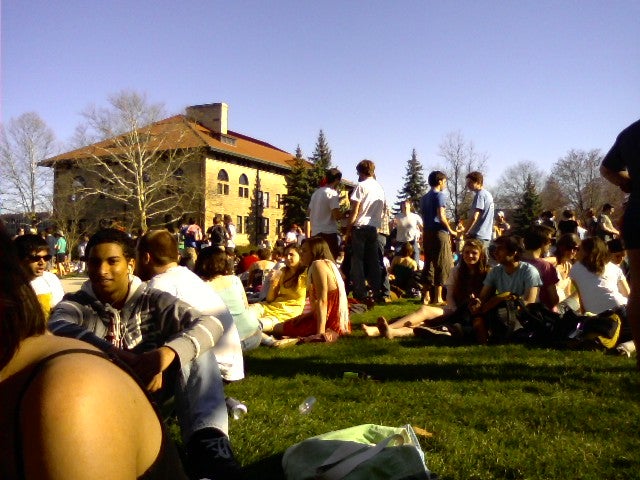 TGIF in Wilder Bowl at Oberlin: will definitely restore your faith in humanity, any time.

Toni Morrison's hometown of Lorain itself is not my home, but the state of Ohio has begun to feel like it to me in many ways - and it was an amazing thing to be in the presence of someone who came from this place and whose hands have touched the tapestry of America's history, have so profoundly affected its literary consciousness. Oberlin makes an appearance at the end of Beloved, and as of yesterday, there is a bench in Tappan Square that will commemorate and eternalize Oberlin's home on our country's timeline.

Undoubtedly, last night has already lodged itself into the eternalized compartments of my memory, too.

"Four years ago, I helped defend (with success!) the book against a group of parents in my school district who wanted to ban it from our curriculum."

That's really cool. How did that happen?

Great entry! And you're absolutely right about "Beloved"--it is one of my favorite books ever. Morrison is amazing! I'm gonna read "A Mercy" soon; I'm sure it's fanatastic too!

@ Anonymous: You can still view the parents' group's website - their page devoted to Beloved can be found here.
They reference this essay as justification, too.
It's unbelievable to me that anyone could be so blind as to take sentences completely out of the context of the book and then try to make outrageous claims like saying that Morrison is "a black racist" and "encouraging of sex with animals." Anyway, I sat on multiple panels and spoke out in defense of both the literary merit and historical importance of Beloved as a text high schoolers are capable of reading, handling, and learning from. It was a book that changed and enriched my life at 17, and I know I'm not the only one. Fortunately, the school district (mostly) agreed, and kept it in our curriculum.

@ Fajer: Thank you! Glad to hear from another Morrison fan. I started "A Mercy" about a month ago and really struggled with it a lot more than I have with her other works, but I'm going to start over and try to tackle it again soon, with more patience this time...I've heard wonderful things about it. An

You're welcome! Oh, I hear "Song of Solomon" is pretty good too. I read one of the book's passages..great stuff!

By the way, I whole-heartedly agree with you..It is completely silly, ignorant and quite simply put: freaking retarded, to say those things about Morrison and "Beloved." They're missing the whole point! It makes me wonder if they actually read the book (really read it, and not simply skimmed through it looking for so-called profanity).

*Sigh* Can't we steal Morrison from Princeton, and get her to work at Oberlin instead? Lol.