My silkscreening final has been the death of my weekend social life. Sunday evening consisted of me camping out in the silkscreening studio from 9 PM to 5:30 AM to complete the finishing touches on my ambitious inky undertaking. 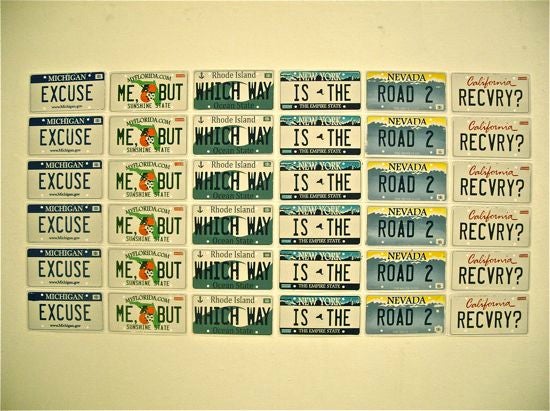 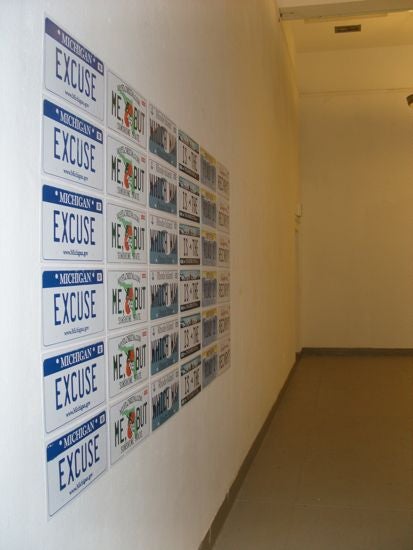 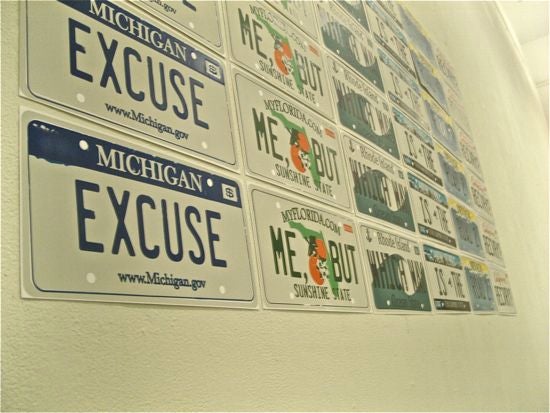 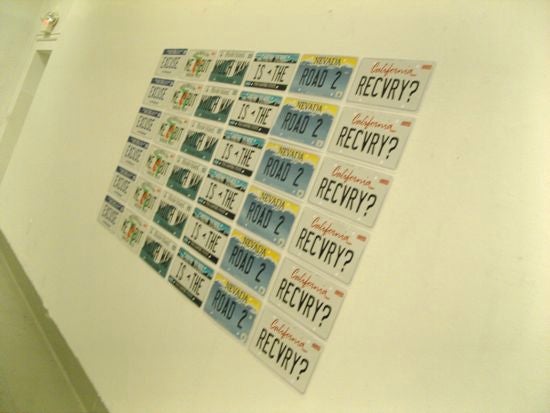 I don't mean to throw a pity party for myself, but this was a lot of work. But really, I have grown to love silkscreening so much that it is probably bad that I am devoting so much time to it. In case there are any questions on what the work exactly is, here are answers:

License plates are interesting pieces of both art and identification. They can reveal a lot about the state being depicted, and they can be personalized to show off an individual's personality. Their relation to cars made me think about directions, and I then began to question what direction our country is going in. Looking at the ongoing economic recession, I decided to incorporate this message (Excuse me, but which way is the road to recovery?) onto six license plates of states heavily affected by the recession. These states were not necessarily the ones hurting the most, but ones that conveyed the widespread effect of the recession. For example, you see Michigan and Detroit's fall from being the major U.S. economic powerhouse; you have the word "Sunshine" on Florida's license plate and "Empire" on New York's, ironically evoking happiness and strength respectively; even the smallest of states in Rhode Island are feeling the immense pressure. Furthermore, the fall of the American auto industry is a major contributor to the economic recession.

After this weekend and today's critique, I'm feeling ever more confident in majoring in art. Hooray!

Now for some shameless advertising: Come to the Art Walk on Friday, December 11th!

Wow, Karl, this is truly impressive. Is it up in the art building?

I took it down this afternoon, but I'll be putting it back up for the Art Walk on Friday.

Cool, dude!
This entry randomly popped up on an email from the Oberlin mailing list..
I'm considering applying to Oberlin, and one of the choices I had as a major is studio art. I love art like this ... That goes way beyond the 2-dimensional representational aspect, and is so loaded with an underlying meaning.
I've attempted to do some of that with my own paintings, I don't know how successful I've been at it.
But it's good to know I'm not the only one trying it!
Again this is super awesome!!!!

-Becca
I hope this blog has given some sort of artistic inspiration, and hopefully you decide to apply to Oberlin! I can't speak on behalf of any painting class, but I can tell you that my slikscreening class this semester has been spectacular. So much work, but incredibly rewarding.

wow that's so cool!Love that Rhode Island part.
Actually I came here from the link in the Oberlin mailing list too. But your blog is incredibly inspiring.
The silkscreening made me think of LOMO cameras.You play lomos?

-Biyi
I have never experimented with an actual LOMO camera. Perhaps some day soon.

Well, I am very impressed and having many a late night in the print department (never to 5:30am, didn't have the stamina) working on the lithography press I completely understand the obsession with the processes of print making. It certainly allows one to achieve effects otherwise more tedious and, believe it or not, more laborious than pulling one print after another trying to make them as identical as possible and true to what was envisioned. Nice work! Also many times politically or socially motivated art work can put me off because it's too alienating, or aggressive, or nationalistic or just plain nauseating. You found a way to appease the viewer and make them feel part of the art work. You're right, license plates are so much part of each of us.
I can't wait to see what comes next.

I saw your piece during the art walk! It was amazing!

Hi Karl, look up there in the comment! there is one I left almost a year ago. Now I am first-year in Knox College, Galesburg,IL, also taking printmaking class. I had my first silkscreening class yesterday, and suddenly remembered, oh, I seen some silkscreening license plates before. so I googled here again. After taking printmaking class almost a term and look at these plates, they seemed more amazing. and I can understand more how it feels to work in the studio overnight ;P