For freshman year summer, there's a stereotyped template that most people seem to follow. Go home, get some job, get unbelievably bored, and learn that you've started to outgrow that 'home'.

But for sophomore year summer? Half of the people I know are building their resumes and working unpaid internships; and the other half are 'finding themselves' and taking a break.
And I guess I'm in the latter half.

After the semester that I had, I decided to save up my money and go jobless this summer and just pursue movement arts.

For my first three weeks, I headed to Brooklyn for tricking and acrobatics.

Driving into New York City wasn't quite as romantic as I'd hoped.

After one disappointing and kind of obstructed view of the city from Jersey, we ended up in a tunnel, and half an hour later emerged in Manhattan. Another agonizing 45 minutes later and we were finally in Brooklyn.

I grabbed essentially everything that I own (all in a backpack and 49 lb. suitcase) out of Amanda's car, and stumbled into Ben's apartment.

Ben is an Oberlin alum who graduated in '13. He was a senior when Molly and Christy (the circus seniors when I was a freshman who got me into circus and tumbling) were freshmen. To put it another way - I'm the current Tumbling Club Captain; before me, it was Molly and Calvin, and before them, it was Ben. Now he lives in Brooklyn trying to make it as a stuntman and acrobatic performer.

I'll admit that for this first phase of my Summer of Movement™, I didn't have much of a plan beyond 'go to New York, live with Ben, and train acrobatics'. I didn't put much thought into this.

But I didn't need to.

Pursue one thing intensely? Check. Find myself in a new, unfamiliar city? Check. All these three weeks needed were to take place in the month of January, and it would have felt like one of my winter terms.

Within no time at all, I quickly became comfortable on Ben's couch; and I felt right at home at the Brooklyn Zoo, a fairly new movement/parkour/tricking training gym. I became one of the regulars.

Spending time with Ben was awesome. I've always found that Oberlin alums are always an incredible source of expanding your perspective about what your Oberlin and post-Oberlin life can be, but especially so with Ben, who has such similar interests to me. His stories and philosophies inspired new plans and ideas for my movement and Oberlin future (like planning an Oberlin Tumbling Club Winter Term/Spring Break), and added even more fuel to my bonfire of passion.

After a week with Ben, I went and stayed with a current Obie friend in the Upper East Side for the next two weeks, and in between all my time training, I discovered the chaotic, messy, and beautiful overstimulation that is Manhattan.

There's no such thing as overtraining... only under recovery.

I trained almost every day for three weeks during the afternoon and evening open gym times, and took every class that I could. Luckily for me, it turned out that included in the monthly membership were unlimited classes and open gym.

This is what my last full week looked like: 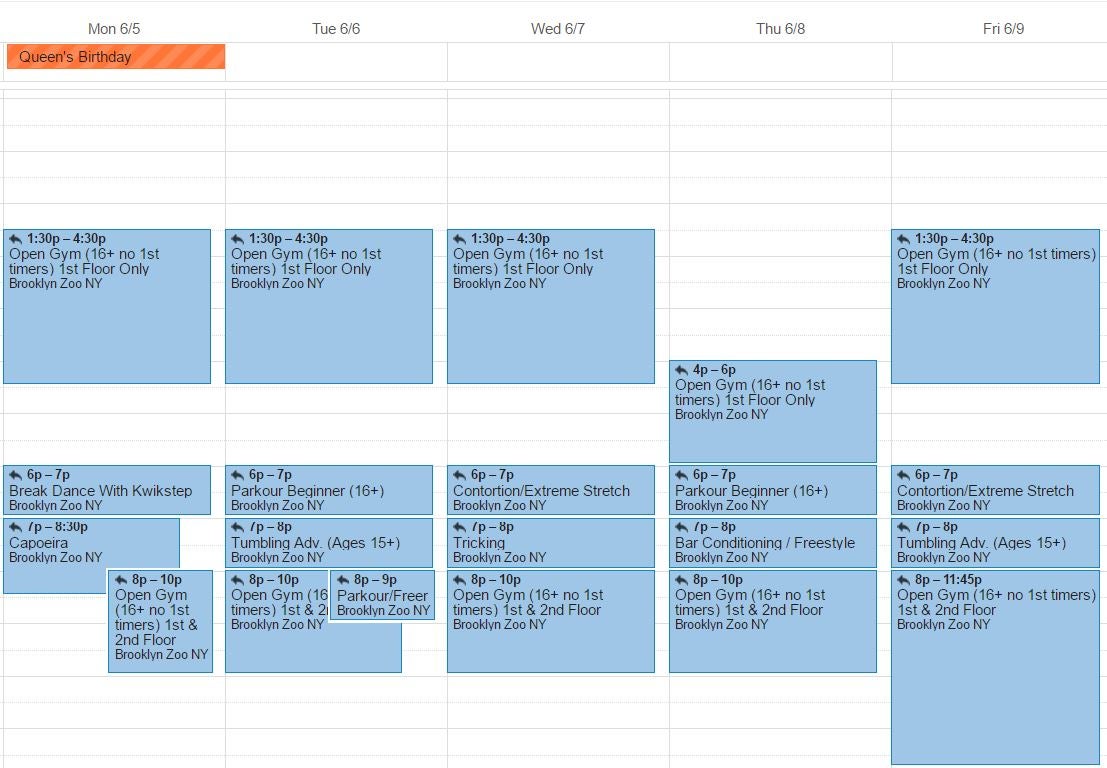 If that all sounds exhausting.... well, it was. But only at first. After the first few days of sleeping in ridiculously late and walking back to Ben's place totally and completely spent, my body adjusted, and I soon found myself with enough energy to actually keep up with my high-volume, high-intensity training. The human body is surprisingly versatile and resilient.

For my recovery, I slept in as late as I needed (as open gym didn't start till 1:30pm), and made sure to keep a decent amount of protein intake. I took the weekends off, because the Brooklyn Zoo didn't have adult classes on weekends (reminder: it's a parkour gym, not a real zoo. We're the animals).

At Oberlin, I only get to train three times a week, with maybe 2-3 hours a session. That's enough to make progress, but I always hungered for more. So what happened when I had all the time in the world to make progress?

I soon found out that any limits I thought I had were all in my head, and that I could conquer any challenges that I gave myself with enough time.

This is the part where I feel like I should explain why I didn't bother to try and build my resume this summer, and why I decided to take a risk and pursue my movement arts.

In a nutshell: movement, and especially acrobatics, gives my body a richer and more lush sensory experience of the world.

And that sensory experience is powerful.

When I started tumbling, I didn't even feel that my legs weren't straight in a cartwheel. I didn't know which way was up when I rolled.

But the more that I use my body for movement, the more aware I become. Now, when I trick and dance, I feel incredibly present in space and in my own body. I feel alive.

And I. Am. ADDICTED.

By the time it came time to leave, I didn't want to. I was hooked on my movement progress, and in love with the Brooklyn Zoo.

Moreover, New York City was the antidote to everything that I experienced in my Sophomore Slump. I never felt bored or lonely - all I had to do was step outside or get on the subway. Around every corner was something new and unexpected, and a new adventure awaiting (like one time, accidentally leading an arts parade on a sunny Sunday afternoon and ending up at an invite-only after-party - now that's a story you gotta ask me in person). There's no place quite like it.

And yet, I was even more excited for what was to come.