Last week, I wrote about the work I'm doing this summer. However, summer is also about fun, and I've been having lots of that.

I've spent a lot of time with Mom, Dad, and Blake talking, teasing each other, and playing games. Blake recently got Smash Brothers Brawl and proceeded to kick my butt. Mom and I have battled with Boggle, a word game. I've won several rounds this summer, an accomplishment I would previously have considered the realm of pure fantasy. Dad and I have played Pente, a Greek strategy game. I've done better in that than I have in Boggle, but he still wins the majority of our games.

The best game of the summer, however, is one my brother made up. Blake based it on something he played at a friend's house. I believe the official name is Hero Quest; Blake's version is HeroScape. It's a tabletop game that combines elements of D&D, trading card games, and the fun of having elaborate miniature armies set up on a board. Here the fighters are an eclectic combination of Playmobil figures: knights, pirates, Vikings, Union and Confederate soldiers, and "agents"--figures he is using as superspies, apparently, and who defeat the other game characters as surely as James Bond would. Lots of work and thought went into this, and it shows: it's brilliant. 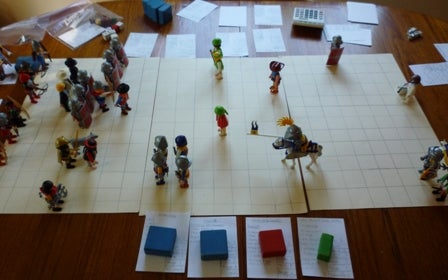 Each character or set of characters has a card explaining what they can do. Some can attack from a distance (a range of X squares is given on each card). Most of the cards have a photograph of the character taped to the back. They have names: the Green Pirate Gang, the Green Pirate Leader, the Lion Troops, the Lion Troop Leader, the Lion Troop Mounted Leader, the Agents, the Assassin, the Kung-Fu Master, the Ranged Contingent (three people with bows), the Roman Legionnaires, the Roman Auxiliaries, the Vikings, the Viking Leader, and so on. Some of the special abilities are pretty clever: the Union and Confederate soldiers get bonuses when fighting each other; Roman Legionnaires can form a shield wall and get attack and defense bonuses for each Legionnaire adjacent to them; the Lion Troop leaders give similar boosts to any Lion Troops within fifteen squares of them; some of the leaders get a boost fighting a character who has killed one of their group. 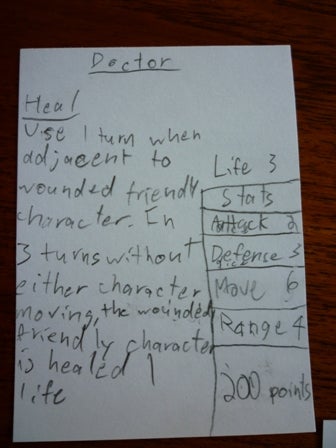 There is an additional element not shown in this picture. We only played with the game taking place on one level. However, Blake took several wooden blocks we had and that were about the same size as the squares on the board and added a height-advantage element. Had we put the blocks on the board, the characters could have moved onto them (moving up a level counts as moving two spaces). You get an attack bonus for having the high ground. 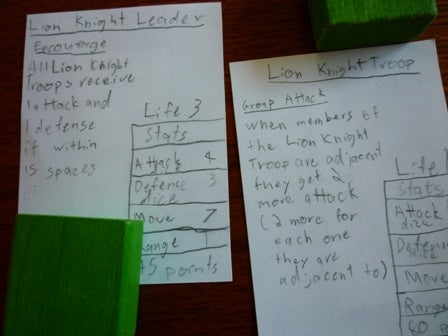 What really amazes me is that Blake did all this for fun. It's complicated and detailed, and he enjoyed making it. I think if he wanted to, he could make a good living designing games someday. 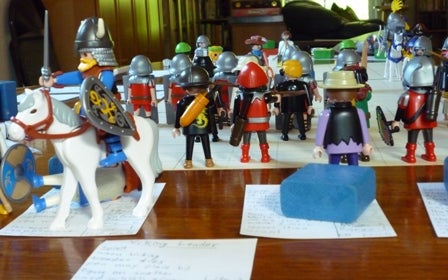 My more solitary hobbies get their attention, too. I recently got a second set of glow poi. These have different programmable modes. They are gorgeous. I can set them to any of six different solid colors, have them fade slowly through these colors, or strobe in over a dozen patterns. There's a blue-and-pink strobe that's pretty and a hypnotic blue-indigo-and-purple. They're dazzling at night, but during the day, they just look like tennis balls in stretchy socks; earlier in the summer, therefore, I got a pair of red velvet poi with short silk tails for spinning in daylight. 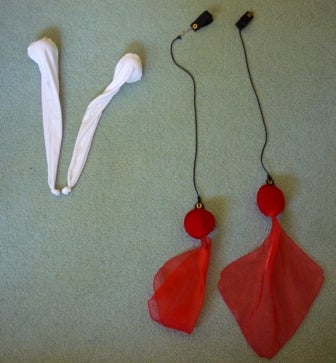 Both sets of poi. Aren't they lovely?

Progress on the Ace Attorney video games has slowed to a standstill, alas, but on the other hand, I've read about thirty books this summer. (Another advantage of nannying: when the kids have chores, you can stick your nose in your latest book.) They have been, as they usually are, an eclectic lot. I mentioned a few of them here, but here are a few more.

-The Hunger Games and its sequels. I liked the first one best; I found a several plot holes, deus ex machinas, and character inconsistencies in the later books. It's a series that actually gives its young heroes the confusion, manipulation by others, and psychological trauma that would normally ensue in the real world. This is admirable, but as a result, the series as a whole did not end nearly as triumphantly as the first book, and I do like triumphant endings.

-When You Reach Me. It takes talent to write a book that would not exist if not for time travel without making it be about time travel, which is what this book does. It's a story about a girl growing up in New York, about her family, friends, and enemies, and it is very good. It won the Newbery and I can see why.

-Gidget. A fun book about love--of boys and summer and surfing--in the fifties, based on the author's daughter. She let him listen to her conversations to get down the way kids talked.

-The Kane Chronicles, written by Rick Riordan of Percy Jackson and The Olympians fame. These ones are about Egyptian mythology. The first two books are out; Blake had them, so I borrowed them and plowed through them in a few days. Very funny (not a surprise, considering the author). Most of my knowledge of Egyptian mythology--everything that's stuck--now comes from this and Stargate SG-1.

-TheName of this Book is Secret . Recommended by one of the girls I babysit. Very funny. The author routinely addresses the audience, warning them to stop reading now, before it's too late, and promising not to give anything useful away about the characters. Pseudonymous Bosh makes me think of a lighthearted Lemony Snickett.

-Daughter of Persia: A Woman's Journey from Her Father's Harem Through the Islamic Revolution. The autobiography of the woman who brought the profession of social work to Iran. It begins when she was a child, sometime in the 1930s, and goes up to her exile during the early days of the Islamic Revolution. She was clearly heartbroken--and terrified--at the turn the Revolution took and its destruction of the progress that had been made. She was lucky to get out alive.

-Storm Front. Book One of The Dresden Files. A funny, gritty detective story told by the only openly practicing wizard in Chicago. (He's a police consultant.)

-Traveling Light: On the Road with America's Poor. Several anecdotes of people the author met riding Greyhound buses around the USA. The style--stories interspersed with statistics and speculation--made me think of Barbara Ehrenreich, though not quite as good.

-Infoquake. A good book, set in a future where people interact by multi (virtual body) as often or more so than they do face-to-face. Really excellent worldbuilding without letting the book be about the world. That's pretty uncommon. I didn't actually like any of the characters much, but I am interested in them and have the second book of the trilogy now.

-Hothouse Kids. This book didn't tell me much I didn't already know or guess at through either experience (watching competitive parents when Blake was in preschool) or psychology classes (the Terman study, the difficulty of designing culturally neutral intelligence tests), but it was an interesting read.

-A Game of Thrones. Several of my friends had been urging me to read this all summer, so at last I did. It's incredibly gripping--I read it compulsively. Fortunately, I bought a boxed set of the first four in the series (the fifth one just came out), so I can keep going.

Besides that, I've started knitting a pair of fingerless gloves and--most exciting of all--I finally bought a guitar! 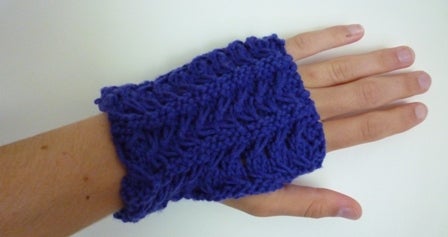 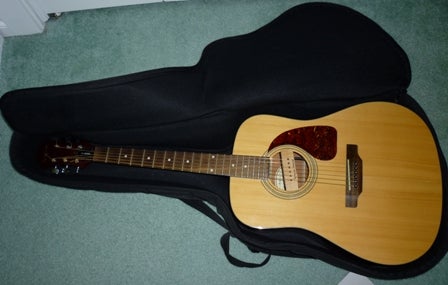 So summer continues, busy and happy.

There's an Oberlin conservatory alum (and their friend from grad school) who decided to create an unofficial soundtrack to The Hunger Games. It's sort of amazingly awesome.

Also, I think Blake should come visit you and embrace the gaming adoring community of SciFi hall. His game sounds amazing!