If you can believe it I'm still in Munich, but not for much longer. On July 28th my study abroad experience comes to a close and I fly back to the United States. So even though I'm still abroad for another day, the studying part ended two weeks ago. Now that I've jumped the hurdle that is finals week and gotten a little bit of distance from my classes, I figured I'd finally write about them.

During the winter semester I took one class at Ludwig-Maximilians-University and the rest of my classes at JYM (my study abroad program). During the summer semester I took three classes at the university, one class at JYM (the required German grammar class), and did an independent research project for credit (which will get its own post later). My grammar classes here have been great, but I don't really know what to say about them so I'll just launch into my university classes. Two out of the three were in German so they have German course titles, but JYM gave them English titles for Oberlin's benefit, so I'll list those here too.

Musik und Literatur. Versuchung eines Spannungverhältnisses, or Interplay Between Music and Literature
In my experience there's usually one class per semester that I'm slightly less enthusiastic about and this semester Music and Lit was that class. It's not that the subject isn't interesting to me, it certainly is. Germany and other German-speaking areas have such rich traditions of classical music and literature and the connections between those two traditions are worth exploring, but the format of this seminar just didn't work for me. I don't mind when the professor takes the back seat in a seminar, but over time I've realized that I personally don't find student presentations an effective learning tool, especially when the students not presenting aren't required to read up on the presentation topic beforehand. There was no required reading for this particular course because every meeting was structured around a student presentation on a different topic. Some of the presentations were really interesting but most were lackluster and hardly any of them led to interesting discussions. Also this class was on a Friday afternoon, which is almost unheard of in Germany. Make of that what you will.

Müde Heldinnen (Tired Heroines) or Heroines in Fin de Siècle Lit
In this seminar we focused on the heroines (or possibly the anti-heroines) of four texts - Effi Briest, Buddenbrooks, The House of Mirth, and Madame Bovary - to look at the idea of tiredness in literature, modernity, and what it means to be a heroine. If that sounds like a strange group of ideas, maybe it was, but somehow the excellent professor made it work. He asked a lot of us in comparison to my other university professors. We always had lots of reading to do, whether it was from our foundation texts, critical theory, or popular science writing of the late 19th century. In class he always had interesting ideas for how to keep a discussion going, but we mostly worked in small groups so everyone had to have a lot to say to keep the class running smoothly. A class that relies heavily on student initiative and participation is a gamble; sometimes it doesn't work, which it didn't in Music and Lit, but when it does work, it works beautifully, which it did in this class. Overall this seminar was a standout not just for the semester, but for my three years of higher education. 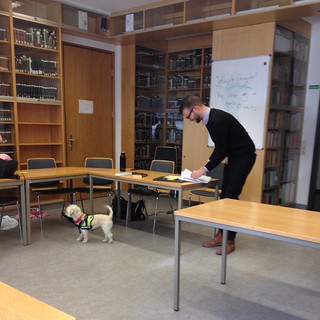 Once someone brought their friend's puppy to seminar and the professor was totally cool with it, another point in this class's favor.

Kicking Daffodils: Modern Women Poets
This was another great seminar, and it had the benefit of being in my native language! I was always happy to come to this class late in the week because if I'd really put my foot in my mouth while speaking German earlier in the week, going to this class was a reminder that I can actually speak articulately and formulate thoughts on the fly. Aside from the boost to my ego it provided, it was generally a great class. As I wrote about in my last post, I've felt the lack of female voices in my syllabi very keenly these past few years. This seminar was a great answer to that.

Also, I was absolutely floored at the level of dialogue in this class. I was the only native speaker in the seminar and while I probably participated more than the average student, most of the students were very engaged, spoke fluently and intelligently, and kept the discussion going at a level not far from an English class at Oberlin. As someone who's trying to get to that point in a second language, it was inspiring to watch them.

Overall I was really pleased with my classes this semester. Even though one of them was a dud, it didn't really bother me because the other two seminars were so great, interesting and challenging all in one. Not to mention that my grammar class was fruitful, as always, and my research project was a lot of fun. Stay tuned for a post on that coming soon!