Last week was my final one in Cape Town, South Africa. Had I been a better, more dedicated, more diligent and more thorough blogger, an ideal I have manifestly fallen short of, I would have updated this blog at least once at the passing of every second of my time there. Disappointingly, my efforts to keep you up to speed with my globe-trotting adventures were encumbered by a series of totally random, universe-induced challenges that were completely beyond my human power to solve. The results of this unparalleled degree of misfortune are that, instead of the generous ten or so updates that I had meticulously planned to pump out over the summer, I am only able to give you one, lonely blog on the whole experience. Keep in mind once again that this was NOT due to excessive procrastination coupled with an inexplicably intense episode of laziness towards the end of the summer, but a result of the aforementioned systematic, inexplicable EXTERNAL FORCES that conspired to derail my blogging efforts.

Now that I have (hopefully) successfully explained away my astonishingly long absence from the blogs, I can finally get started on actually blogging. As my last post suggests, I spent my summer in Cape Town, South Africa. My reason for being there was to complete an internship with a human rights organisation called PASSOP, which, in addition to being a pun (passop literally means beware! in Afrikaans, a Germanic language widely spoken in South Africa, mainly by white Afrikaners and Coloureds*), is also an acronym for People Against Suffering, Oppression and Poverty.

There is a very specific reason why I chose PASSOP, which has to do with the background of its founding:

Around the period 2007-2008, my country, Zimbabwe, experienced historic inflation levels of over 230 million percent. Although the world focused intensely on the galloping inflation rate and the incredibility of $1 trillion Zimbabwe dollar notes, there were deeper issues at play behind the stunning inflation figures. What this inflation rate translated to for most Zimbabweans was a life composed of a series of daily horrors. As inflation skyrocketed, the standard of living plummeted in the opposite direction. There was very little food in the country, and in the event that it was to be found, it was pegged at prices so exorbitant you couldn't afford it anyway. You could walk into a shop one minute and find bread being sold for say, $2 billlion Zimbabwe dollars, and walk into the same shop moments later and find it costing over $200 billion dollars. 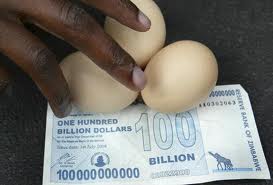 The ravages of hyperinflation. These 3 eggs cost over 100 billion Zimbabwe dollars circa 2007.

Social services nearly collapsed--schools were closing down faster than inflation went up, hospitals were on their knees, and the infrastructure, once hailed as some of the most advanced in Africa, surrendered to irreparable decay. Hunger decimated rural communities, with many resorting to eating vile-tasting tree roots just to stay alive.

This is the short version of a very complicated crisis, the point of which was to demonstrate the level of dysfunction that Zimbabwe had reached. It meant that over a quarter of Zimbabwe's population was forced to flee the country, the majority of whom fled to neighbouring South Africa. Many of these people, unable to afford to apply for passports from the Zimbabwean government, entered South Africa illegally, risking their lives by swimming across crocodile-infested rivers and exposing themselves to potential abuse by criminal smugglers who often took advantage of them.

Once in South Africa, however, Zimbabwean migrants faced little hope of a better life. Tensions between them and local South Africans over jobs exploded in 2008 when Zimbabweans were targeted in a heinous outbreak of xenophobic violence. Over sixty foreigners lost their lives in the violence. Many more were internally displaced, their houses razed to the ground and their belongings torched. Zimbabweans continued to experience a great deal of stigma and discrimination. Many Zimbabweans, in spite of being well educated, could not find well-paying jobs due to their undocumented status as illegal aliens in South Africa. Moreover, South Africa itself has its own problems--racism, corruption, and vast inequality--most of these inherited from or spurred by the residual effects of the ruthless apartheid era. PASSOP was founded to directly protect the rights of these Zimbabwean asylum seekers, migrants and refugees in South Africa, but has since expanded its scope to include migrants from across the African continent.

I found out about PASSOP largely by accident. At the end of last semester, while studying ferociously hard to get through finals period, I was also thinking about a summer internship experience that would immerse me in the field of human rights advocacy in Africa. A few haphazard google searches later (some good stuff shows up on PAGE 2 of Google searches y'all!!), I had found PASSOP. The more I read about the organisation, its founding and mission, the more it appealed to me and my interests. A grassroots organisation in South Africa that protects the rights of immigrants from across the African continent--this was perfect for me. Before I knew it, I had applied for a grant from Career Services and booked tickets to Cape Town and back.

To give you a sense of what PASSOP actually does, I thought I would share with you its Mission Statement, which explains it far better than I probably would be able to. Here it is:

Mission - People Against Suffering, Oppression and Poverty (PASSOP) is a community-based non-profit organization and grassroots movement that works to protect and promote the rights of all refugees, asylum seekers and immigrants in South Africa. PASSOP believes in and advocates for equality and justice for people across all societies, irrespective of nationality, age, gender, race, creed, disability or sexual orientation. PASSOP creates and strengthens networks of communication, dialogue and interchange for the advancement of peace, understanding and justice in local communities. Our mission is to empower communities to stand up and express their beliefs, needs and fears freely and access the rights they are entitled to. PASSOP believes that this can be achieved through basic rights education, activism, integration and community participation. 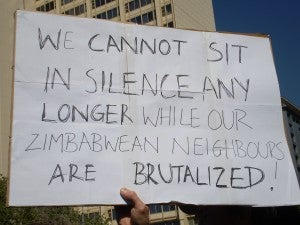 South Africans in solidarity with Zimbabweans. Photo by PASSOP.

My favourite part of their mission statement is the "vision", which captures the highest essence of my own personal beliefs. It goes thus:

Vision - A society devoid of injustice, prejudice and discrimination, where people are whole, free and confident in all aspects of their diversity.

Working at PASSOP this summer was an incredible experience. This being my first real-world job experience, I was a little nervous about my own level of experience (which was nothing to write home about). But my fears turned out to be unfounded--I found an incredibly genial working culture and amazingly helpful and knowledgeable people at PASSOP. Aside from the fantastic staff, headed by an activist par excellence, Braam Hanekom (named one of South Africa's most influential young people under 30), the office was filled with interns from all over the US and the world. Many of them attended American colleges: Macalester, UChicago, Trinity, William and Mary and of course Oberlin (me), and others from Europe were studying at Sciences Politique (France) and University of London School of Oriental and African Studies (SOAS), amongst others.

As an intern, I was expected to do, and was assigned, meaningful work. PASSOP is not the wealthiest non-profit organisation out there (and does not intend to become one; this is one of the reasons that attracted me to it). This was not one of those internships where you sit for hours photocopying documents or scurrying about brewing endless cups of coffee. It was real work that had real-world impact--we organised protests, wrote to policymakers who have influence on South Africa's refugee and migration policy, issued press statements, and learned A LOT about South African constitutional law surrounding the labour rights of migrants.

PASSOP has a number of programs that it runs to support the immigrant community; including anti-xenophobia help desks, dedicated paralegal advice desks, a gender rights program focused on empowering women from migrant communities, vigorous lobbying for social services access, campaigns and protests as well as research. All services that PASSOP provides to the communities are free of charge. 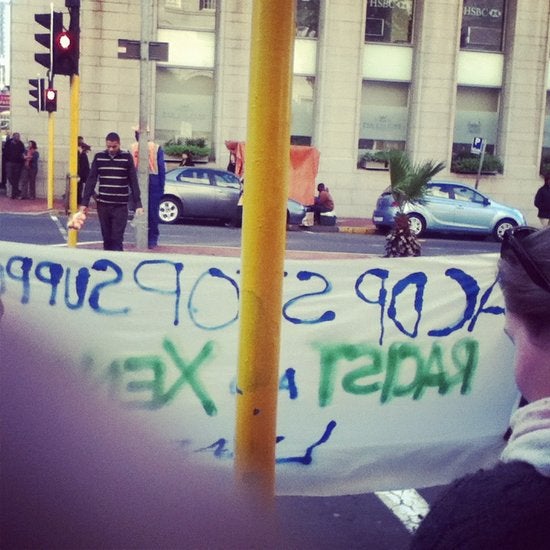 At a PASSOP protest. We were protesting against the deportation of African migrants in Israel.

My personal main project at PASSOP was to promulgate a policy position paper on the migration of Zimbabweans to South Africa. I did extensive research on the nature of migration, and aimed to analyse the constellation of push factors that drove over 3.5 million people to cross the border to South Africa. My paper was also largely aimed at devising some political solutions to the Zimbabwean crisis, particularly emphasising the leading role the South African government, as a regional political powerhouse within SADC (Southern African Development Community), should take in facilitating democracy in my country as a means to address the challenge of excessive migration in the region.

I undertook many tasks at PASSOP, from fixing the printer (we had such a notoriously rebellious printer. It once randomly decided to maniacally pump out the entire South African constitution out of the blue non-stop) to heart-wrenching interviews with the victims of xenophobic and gender-based violence.

I learned so many valuable skills that I will use both at Oberlin and beyond. I appreciated even more the existence of democracy, rule of law and observation of human rights here in the US. It is a privilege to live in a robust democracy that safeguards your human dignity--many across the world do not have this assurance and fight daily for their humanity to simply be recognised.

I left South Africa hoping that the contribution I had made to PASSOP and its work would have some positive effect, however small or big on some people's lives.

Sound idealistic? Probably. But I go to Oberlin, so that's okay. 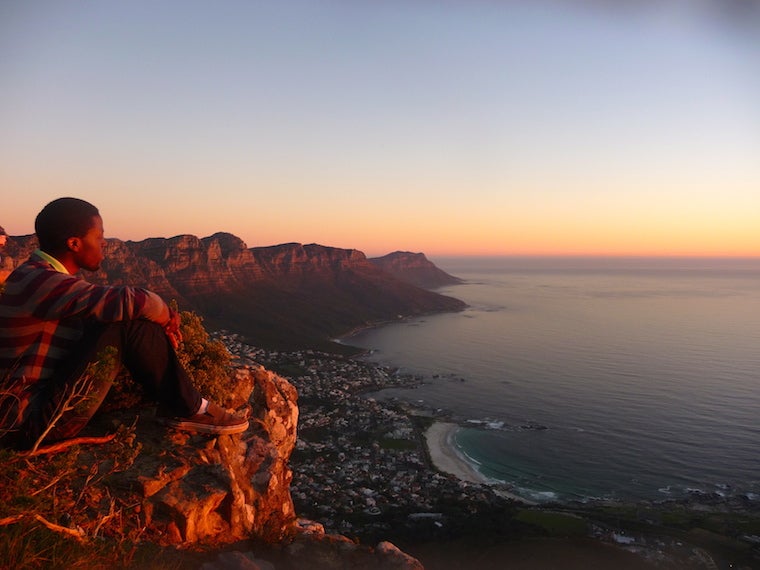 *The term "coloured" is a social construction that was used to categorise people of mixed race under apartheid and colonial regimes in Southern Africa.