Before I decided to join the Oberlin College Marching Band (OCMB, from now on), I decided to check out their website. At the top of the page was their slogan, proudly emblazoned against a fancy header: "OCMB- We suave." I remember thinking, we suave? What the hell? Suave isn't a verb. But I decided to go ahead and join anyway, confusing slogans aside. I was sure it would all make sense eventually.

Being the stereotypical band nerd that I am, I loved marching band after the very first rehearsal. Fun music and a small group of fun people who share my ultimate goal of having fun. There is nothing better.

Still, at four hours of rehearsal time per week, there were days when I had my doubts. Standing in the middle of the field in 45-degree weather, clutching my flute and praying that my fingers might be mobile again sometime within the next year definitely surfaced a lot of whys. Why? I could be getting just as many credits for sitting in my bed eating candy. Why am I here?

Today, I definitely remembered why.

The weather deities have an axe to grind with the OCMB. The moment we got to the football field to warm-up and run our songs- rain, hail, wind. Woodwind instruments are like cats, they really don't like to get wet. Except instead of scratching you until you bleed to death, they crack, or the pads become soggy and fall out. Which wasn't great, considering that we had a performance in 15 minutes. Once we got to the bleachers, the rain was replaced by bone-chilling cold. Thanks, weather, we needed that, too.

As we haphazardly assembled on the field, shivering in our thin uniforms, poking fun at ourselves, making jokes, and laughing hysterically, it all finally made sense. Finding myself surrounded by some of the coolest people I have met at Oberlin, doing something I love, working towards our common goal of being the most awesomely ridiculous marching squadron ever, it became impossible to forget why I loved marching band so much in the first place.

Then, the drum major beckoned us forward, and the show began. 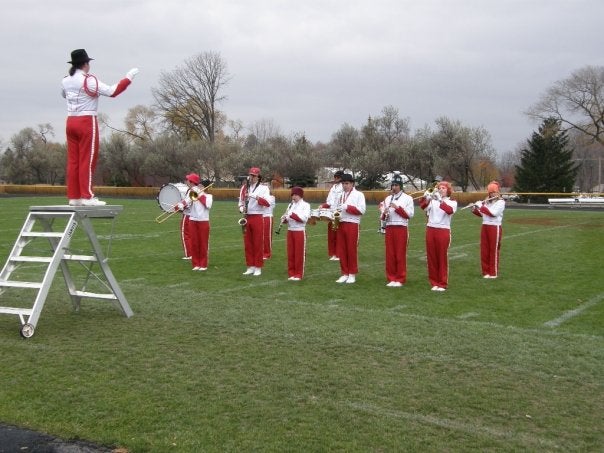 We suaved. We truly did. 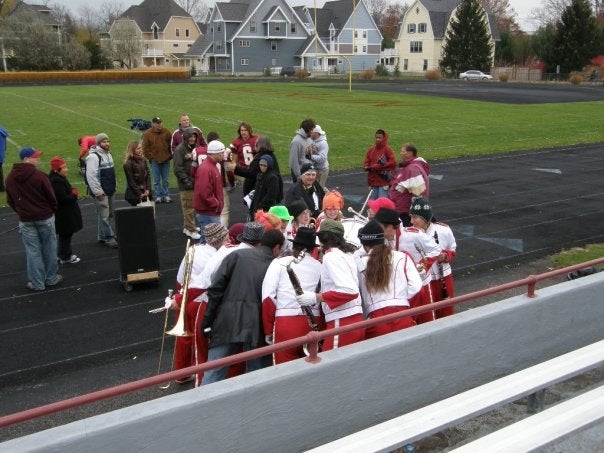