Reading period at Oberlin College began yesterday; finals start on Tuesday. Epic struggles deserve epic soundtracks, and study break parties need fun music. I am happy to provide my own finals playlist for those who are interested.

Note to large media corporations: all of this music, except the Squidmas carol, was found via YouTube or Tumblr; I've linked to my sources. I didn't put any of it up. I'm just sharing it because it is excellent. If my readers like it, they will probably go buy it. Don't sue me!

With that out of the way, I'll begin.

Triumphant battle music is useful for writing long papers. I especially enjoy one of the tracks from Gurren Lagann, an anime that Sci-Fi Hall watches together every year. There is also the Gurren Lagann theme song. (It's really weird hearing this without all of Sci-Fi Hall singing along; at first I thought I had the wrong version.)

Doctor Who also has triumphant music. This one is the Eleventh Doctor's theme, basically, and it's great. Same for the music for Ten.

If you're into Doctor Who, you may want to listen to this song. It's by the woman who did the singing for the Siren in the episode Curse of the Black Spot, but it's a song she wrote herself as a fan of the show. Click the "click here" button at the top to listen. The bolded part is a link to another, wordless piece that actually was in the show and is also beautiful.

Some favorites from Homestuck soundtracks (which have many, many good songs, but I find these work well for writing):

Savior of the Waking World , of course, which is also excellent for spinning poi to.
And Savior of the Dreaming Dead, and Lifdoff, and Frost. Do You Remem8er Me is maybe a little low-key for study-music, but it's relaxing. This version of the song 3 in the Morning has a similar mood; the version from The Midnight Crew album might be better for studying. Actually, the whole Midnight Crew album works pretty well for finals, oddly enough.

If you want something with lyrics, Disney is a good bet--I'll Make a Man Out of You from Mulan and Go the Distance from Hercules make for inspiring study-break theme songs. So does pretty much anything from Spirit: Stallion of the Cimarron. There's a reason I own that soundtrack . . .

And, of course, pretty much anything from LOTR, although I have to put in a special word for March of the Ents. As the comment says, the movie version has more percussion, which I think is helpful to the driving pace of last-minute essay writing--but this ain't bad.

Having just seen The Hobbit, I must also give you this:

It draws from the song in the book, but is much shorter and mixes parts of different verses. (Trust me, I've memorized the full one.) The movie actually had many of the songs from the book, including this one (featuring J.R.R. Tolkien, recorded separately, of course). That one, sadly, only has two verses. The full version can be listened to here.

And then there's this, which plays during the credits:

You can also write your own fun finals songs; I've always meant to parody "Be Prepared." Two years ago, I wrote a takeoff of "Must be Santa," "Must be Finals." (NOTE: Most of this is incorrect for this year; there is no snow and my finals are actually very light.)

The best parody by far, though, is this year's Squidmas carol.

Sci-Fi Hall has its own traditional holiday, Squidmas (because Sci-Fi Hall as a group is fond of cephalopods). It began as a secret Santa--or rather, Secret Squid--gift exchange in Sci-Fi lounge. It has now grown so popular that the exchange has to happen in Starlight, the largest lounge in the building, to accommodate everyone comfortably. It also happens at the end of both semesters. People who wish to participate write their names and three interests on a sign-up sheet; the RA and Hall Liaisons match people up. You get your person's name and information a month or so ahead of Squidmas and get them a gift, which you wrap and place under the Sci-Ficus (a fake ficus tree) in the lounge. On Squidmas, the RA distributes the presents one at a time; each person opens their package, squees over the contents, and tries to guess who their squid was. At the end, all is revealed for those who guessed incorrectly. People are very rarely right, so the reveals often result in cheers and hugs as most of the presents are ridiculously clever, impressively thoughtful, adorably charming, or just plain silly.

This year, a new element was added to the tradition. As I wrote about before, my friend Connor won a purple squid hat at Cedar Point last summer and donated it to Sci-Fi Hall. It now lives in the lounge, where it has become known as the Squid Pope Hat. Recently, another squid hat appeared, this one blue. Our current RA and last year's RA, who was visiting, wore the hats for distribution. They called themselves Sqope Not-So-Innocent I and Sqope George Ringo.

Anyway, the traditional "Squidmas carol" is just a long, drawn-out "AAAAAAAAAAARRRGH!" but, this year, someone wrote a real one.

I recorded the last run-through on my phone. Sorry for the dizzyingly fast panning--I was aiming for capturing the music and showing how many people were there, not for quality cinematography. (Yes, there is someone playing the piano back there.) 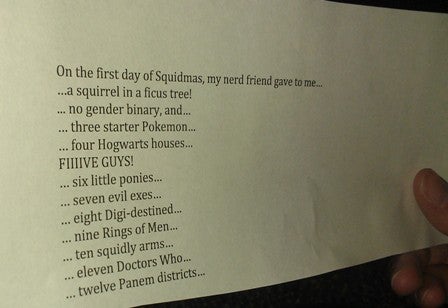 
Merry Squidmas to all, and to all a good finals!