From my scribblings on a US Airways napkin, 30,000 feet in the air: 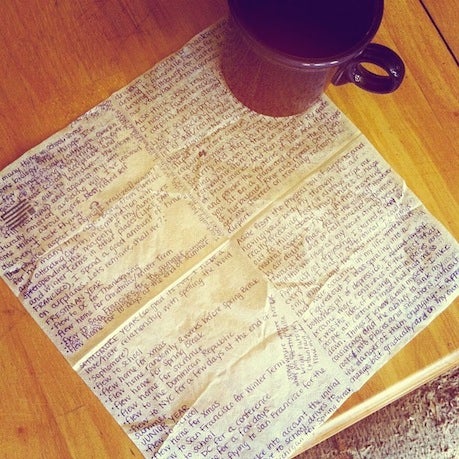 Das napkin. Side note - I've made it one of my summer goals to learn how to use Instagram since I've been avoiding it for a year. I took this photo and somehow found that I have eight followers even though I never use the app...so I guess I actually do need to learn now.

I realized the physical aspect of flying wasn't for me many cross-country trips ago. Being from Florida and attending Oberlin, in combination with spending the majority of my summers and Winter Terms in other places (LIKE SAN FRANCISCO), I spend a good amount of time on airplanes. Let us reminisce, shall we?:


Sophomore year (So glad it's over, I have a love/hate relationship with spelling the word 'sophomore')


And that doesn't take into account the initial freshman year drive to school, driving to Pittsburgh, DC, and Michigan for Spring Break, driving to Cleveland for Thanksgiving, driving to Gainesville, Florida, for Winter Term, driving to Pittsburgh for Easter, or ANY of our volleyball excursions. Also, think about return flights and connections (I have a favorite rocking chair in the Charlotte International Airport). Are you stressed? Me too.

Like I said, airports suck. I love clothes and suck at packing, so I always have a lot of stuff and really heavy bags (in my defense, Ohio to Florida to NorCal to most places I go are always stupid-crazy climate changes, which in turn requires more clothes). Then you have to disassemble your entire wardrobe to walk through security. And then you have to carry everything you own to that really small convenience store to buy an overpriced bag of fruit snacks. And then you sit at the gate and ponder the mysteries of life. And then you sit on a plane and ponder the mysteries of turbulence. Rinse and repeat. Don't even get me started on traveling to/from the airport.

Aside from the physical toil of airports and having your body fly through the air really freaking fast (it always trips me out to think about that), there's a huge mental aspect to traveling by plane. When I was younger, traveling didn't faze me in the slightest. I guess there's something exciting about flying across the country to see your grandmother by yourself when you're in middle school. However, towards the end of fall semester, sophomore (UGH this word tugs at my heart strings) year, flying just got downright depressing. I started to feel like every time I was in an airport terminal I could only think about the most miserable things that were occurring in my life. When I figured out that I wasn't spiraling into a bottomless pit of depression, I became conscious of the fact that it was the idea of leaving certain places and people at certain times that had me so down.

Things I know about myself: I like consistency and the ability to sink my roots into places and situations without the danger of them changing. I appreciate change, but gradually and on my own terms (so unrealistic, I know...I'm working on it). Knowing all that, of course it makes sense that being uprooted every few months, or sometimes weeks, makes me into a huge bundle of feelings. That's right, feelings, I said it. Second noted self-discovery: I used to think I was someone who was lacking in the feelings/emotions department; however, this is silly and false. I realize the truth is that I hate dealing with feelings so I tend to pack them all away and ignore them. I've also realized this only works for so long. Maybe it's when you're in first grade or when you're eighty, maybe it's when you matriculate to Oberlin College and fly all over the country like a crazy person...WHENEVER, but know a day will come where all of a sudden you have allllll of the feelings in the world. And you will have to deal with them. All of them. That's the only way to really take care of your emotional self. College is all about work and having a good time and whatnot, but that's only going to happen if you remember to take care of yourself.

Third noted self-discovery: I really love writing. "But you're a student blogger." I know, I know. For a minute, I really had myself confused because there are times during the semester when writing is a real chore. TURNS OUT, I hate making time to write because my stupid neuroscience brain is very bad at not thinking about academia in the midst of semester crazy-times. But it must be love--scribbling this little ditty on this here napkin for the past hour and a half has kept me from pondering the mysteries of turbulence and from praying that the adorable baby in front of me would cease its incessant screaming. I'm actually rather content and there are still two hours left in this flight.

After a bit of thought, I've decided to start a journal. I've always mondo-failed at keeping a journal, but perhaps this new, facing-my-emotions things will make it easier (I'm also making this one of my summer goals. If it doesn't happen by December, WAH-LA it becomes a New Year's resolution). I'm going to pace myself, though--in addition to writing I think I'll do some watercoloring, an old flame I've recently rekindled.

Moral of the story: your heart's not just a muscle and your limbic system doesn't make you limber. Your feelings are talking to you, don't tune them out.

Also, turbulence does not mean your plane is about to fall out of the sky.