(At a blogger dinner earlier this week, Brandi asked all of us what our favorite word was. My answer: "liminality" -- the state of being in-betweeny, caught between two states of existence, on a threshold...)

Before my first year of college, I decided I was going to write things down. I would keep my journal going! I'd make a blog for my family! I'd write letters and e-mails and Facebook messages to friends far away! I knew that I was headed off for a huge, amazing, life-changing experience, and I wanted to document every second of it. I had already been a habitual journaler and postcard-writer for years; how hard could it be?

That ambition lasted for about 36 hours, while I stumbled wide-eyed through the early days of orientation. There was just too much -- too many strange new things to watch and feel and think about, too many bewilderingly wonderful people -- and my little words weren't up to the task. There was no way I could explain what Oberlin was all about, so I gave up and let it all overwhelm me. 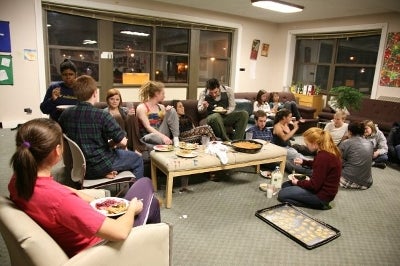 I didn't take a lot of pictures my first year, so I'm grateful to friends who did. Thanksgiving dinner in Harkness, fall 2008.

The thing I didn't expect about going abroad is that I would spend most of this year feeling, in one way or another, like I'm a freshman all over again: the same sense of bewildered amazement, the same feeling of being completely over my head (in the best possible way), the same resigned realization that there's totally no way I could document it all.

When I decided that I was going to study abroad last fall, I picked a setting that was as different from Oberlin as possible: I hopped from a small American liberal arts college in a tiny town to a huge British research university in the dead center of London. My rationale was straight-up academic: I wanted to take a few specialized courses that weren't offered at Oberlin, and to see how I could hold my own in a totally different educational environment. Those are totally legit reasons to go abroad, of course, and I ended up learning a ton.

But here's the thing about studying abroad -- the thing I didn't really appreciate until I went: you are running off to another country where (odds are) you know practically no one, you have little experience with the culture, and the people and things that keep you grounded are on another continent. And you'll be there for a really condensed, intense period of time. Academics are not going to be your number-one focus; if they are, you're probably doing something wrong.

My life at Oberlin revolves around a few things: a close-knit department, my co-op, trans activism, gamelan rehearsals, a constellation of friends who seem to pop up wherever I go. I couldn't imagine what it would be like to be a college student without all of those things -- until I got to London and suddenly, they were all gone. Just like that intense first semester at Oberlin, I had wandered into a brand-new place where everything was totally unfamiliar, and I had to figure out how things worked and where I fit. (It didn't help that I was actually going through college orientation all over again, in the company of hordes of British first-years.) Unlike my first semester at Oberlin, though, I was living on borrowed time: I had twelve weeks to make a home in London before heading back across the pond.

Was it scary and stressful? Yes. Was it a bad thing? Not at all. Studying abroad -- like starting college in the first place -- is an awesome opportunity to have a life crisis: it forces you to think about who you are and who you want to be, what kinds of people you want to surround yourself with, where you're going, and what's important to you along the way. Just when I'd really put down roots in Oberlin -- and maybe gotten a little complacent about my life there -- London came along and turned everything upside-down. It was exactly what I needed. 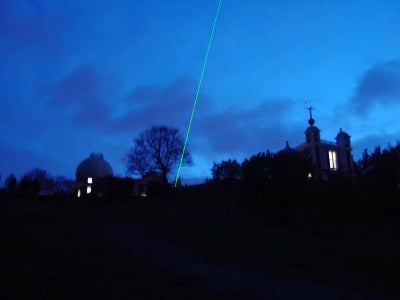 Nightfall at the Greenwich Observatory, sitting on the prime meridian. (Talk about liminality...)

I was in the UK for three months on the nose. Thanks to Londoners' complete inability to handle snow, I actually got an extra three days in London, and was roaming the city discovering new things up until the moment I left. But I was ready to get back to more familiar places and settle down.

Coming back to Oberlin for my Winter Term project was exhilarating. On one hand, I was home again. Over six months away, Oberlin had started to seem fuzzy and unreal: it was amazing to discover that the place I vaguely remembered was still there, like Dorothy coming back from Oz. On the other hand, so many things had changed. Old friends had graduated or gone abroad themselves; the class of '14 (older and wiser after their first semester of college) were waiting to become new friends; new buildings had gone up, new restaurants opened, new professors joined my department. I'd hardly been away that long, but I was coming back to a new school, and reorienting myself to it. Along with that came the same sense of wonderment I'd felt as an incoming first-year. I never knew about this thing! I never knew this person was so cool! There are so many opportunities here! I want to do it all!

After a full semester back, that happy honeymoon feeling is slowly being replaced with something else: the sinking sensation that pretty soon, I'm outta here. The class of '11 -- the last of the wise older students who welcomed me to Oberlin as a wee frosh -- are moving on to (hopefully) better things. After exams end I'm sticking around to see them graduate, with full knowledge that this is my last chance to watch Commencement as a student: next year, barring catastrophe, it's going to be me up there in one of those ridiculous hats, preparing to ship off to grad school or the Peace Corps, a job or a commune.

Becoming a senior in high school felt ritualistic to me: every day there was some mini rite of passage, some affirmation that we were all on our way up and out. Becoming a senior at Oberlin isn't like that, perhaps because not everyone's on the same four-year track: some of the people who entered with me are graduating a year early, others staying a year late to finish a double degree, yet more taking some time off. We're all making our own way to the exit. But there've been a few moments this semester -- submitting my honors proposal, registering for my second-to-last round of courses, saying goodbye to this year's grads at the Classics Department picnic -- when it's been alarmingly clear to me that I'm turning into one of the big kids, whether I like it or not. 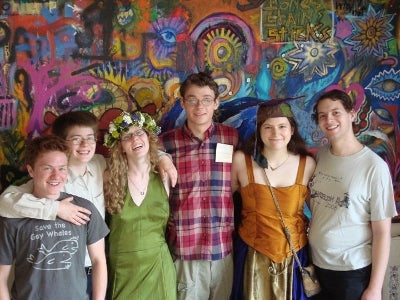 So that's where I'm sitting at the end of my junior year. Half of me feels like a first-year -- There are so many wonderful things here! The other half feels like a senior -- There's so little time! Once my exams end this week, I'll have two semesters left at Oberlin. And for those two semesters, at least, I want to be part of it all.

Lovely to get such a well-written and thoughtful update on your life, and some reflections on your time at Oberlin. You are so awesome and interesting.

I'm glad you're back, Eli. I hope this limbo doesn't occur forever and ever.

Both of these group photos warm my heart to no end!