So yesterday was a pretty big deal. After a few weeks of increased anonymous racism and homophobia on our campus, someone was spotted around midnight - and no more than a few hundred feet from where I live - wearing clothing resembling a KKK outfit. Overnight, all of our classes were cancelled by the administration, and plans were laid out to hold rallies and discussions that would both unite us as a student body, and answer at least some of the many questions we had.

It's really hard to talk about this issue without angering anyone. A lot of criticism has been focused on our "overreaction" of these events in our little utopian bubble. I agree to an extent: in comparison to other evils happening in this world, this problem we have is pretty mild...and reacting so explosively only encourages whoever's doing this. However, there needs to be a line. If we don't act now, how many hate crimes (hate-related incidents, hate graffiti, I don't care what you call it) need to be committed before it's appropriate? When my peers and I don't feel safe walking around campus, something must be done.

Historically, the jazz department (and jazz music in general) has always been involved in this issue. After forty years of separation from the rest of the conservatory, our new building was thoughtfully integrated into the hub of the classical department. As we thought of how to respond today, one of my peers suggested a brass band. There was a bit of discussion as to the reception of music like "When the Saints Go Marching In" at a rally like this one. Ultimately, we were reminded that our music is, in fact, a celebration of African-American culture and acceptance in a mixed-race community. So we marched. I was playing percussion instruments but I brought my camera with me and occasionally took some photos. 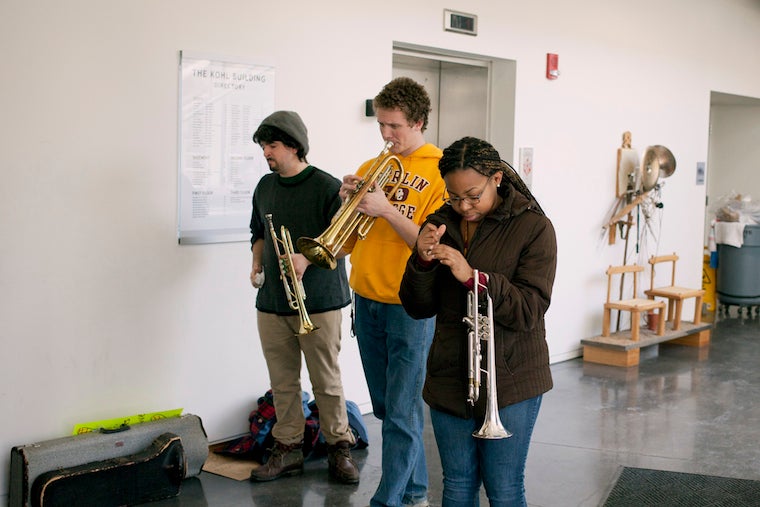 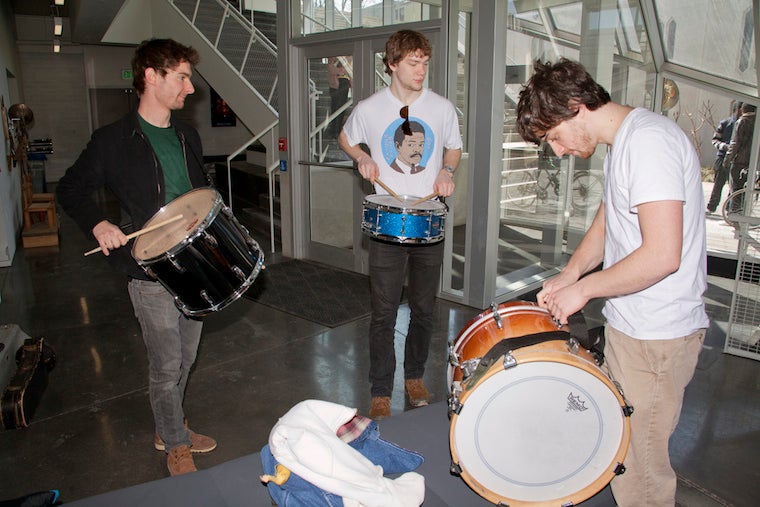 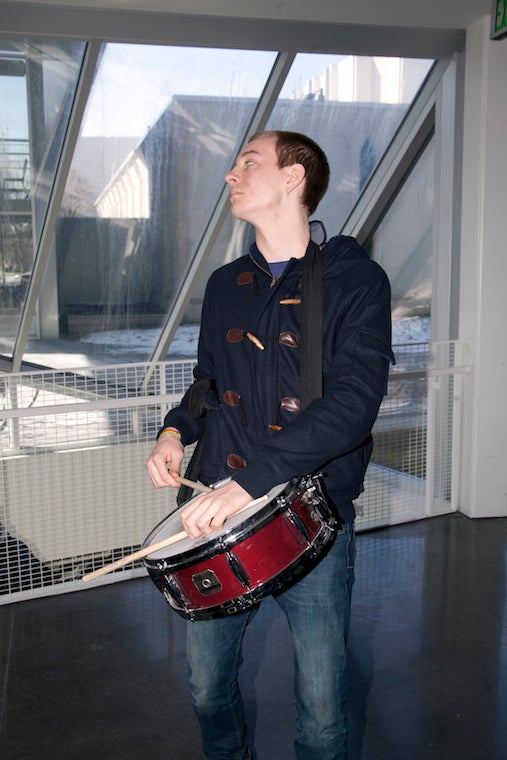 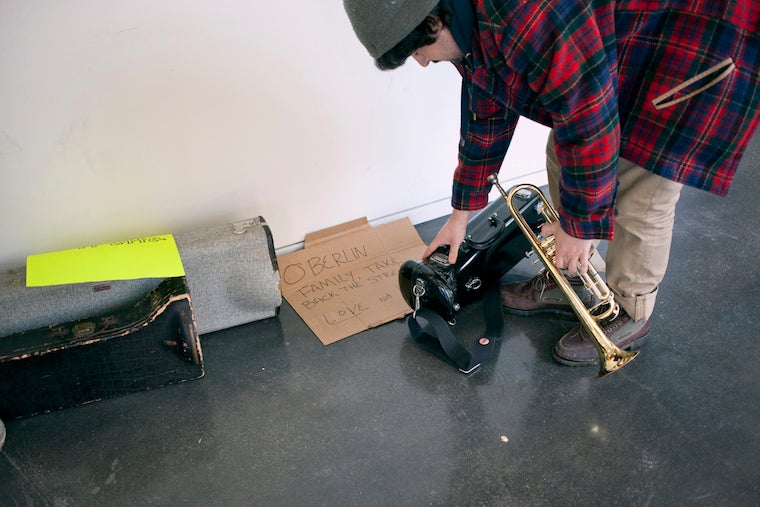 We marched to Wilder Bowl, where Dance Diaspora was performing. We traded off songs with them before the rally started. 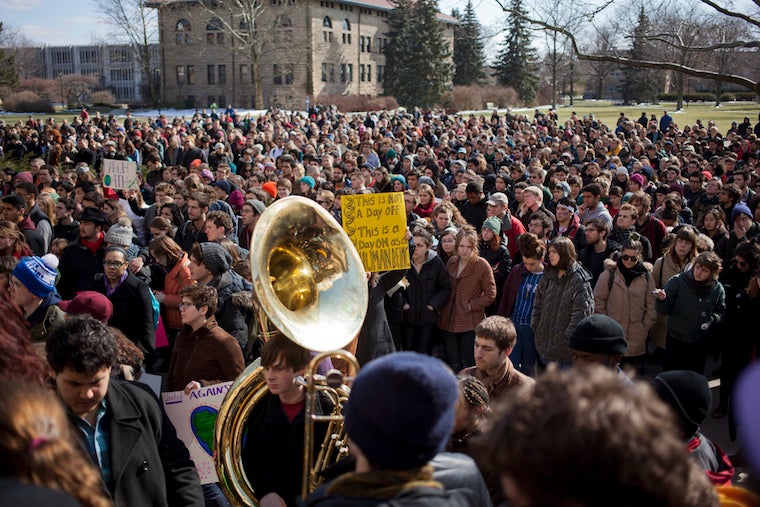 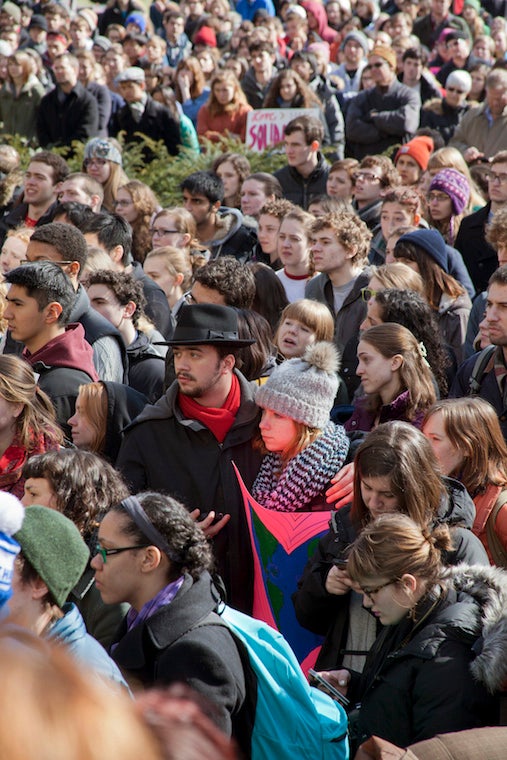 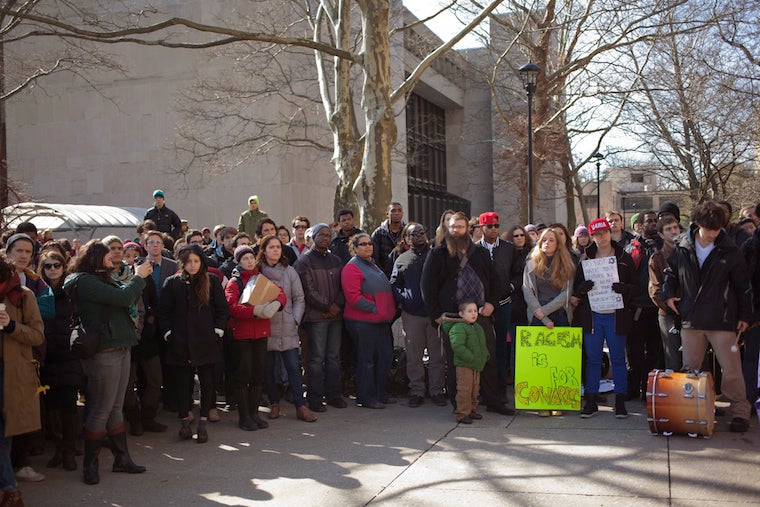 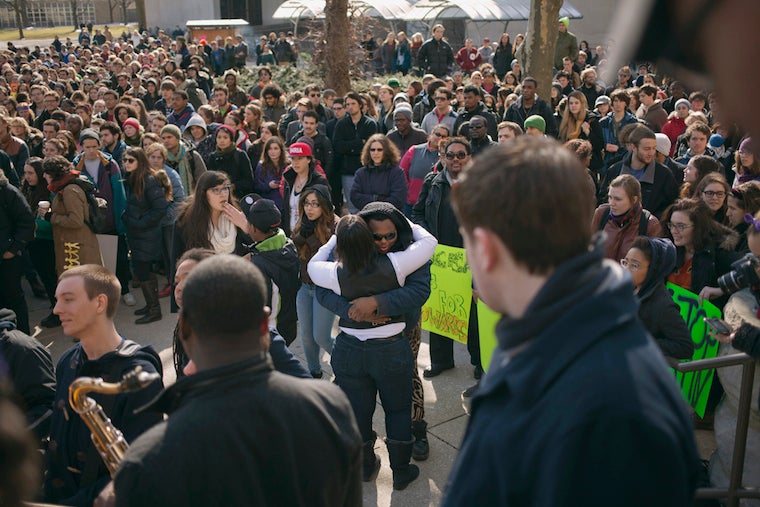 We then followed the members of Dance Diaspora in the back of a pickup truck around Tappan Square. The police stopped traffic for us, which was really nice because I'm sure you can't just throw a parade on a public street and tell the town on that day. I'm not sure anyone even knew we were going to march around the block on Main Street before we got out onto the street. Our line of protesters stretched all the way around to the other side of Tappan Square; I'm sure over a thousand people marched with us. The best part is that the music we were playing is just stuff we picked up by ear. It isn't rehearsed, and we have never played together as a group. It was just a bunch of musicians gathered together, playing music with each other. 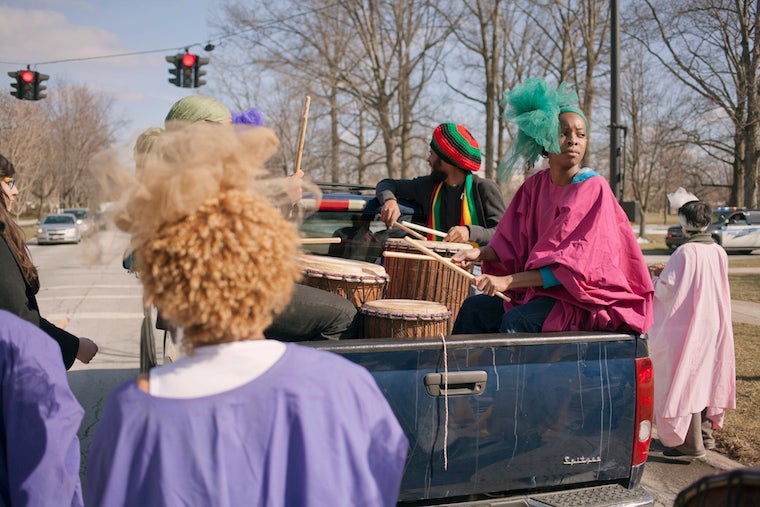 The march concluded in front of Finney Chapel, where we kept performing. Soon after, the convocation was started and a lot of valid points and insightful questions were brought up. This isn't the kind of problem that can be dealt with in one day, but I feel like we made significant progress towards a happier and safer future. 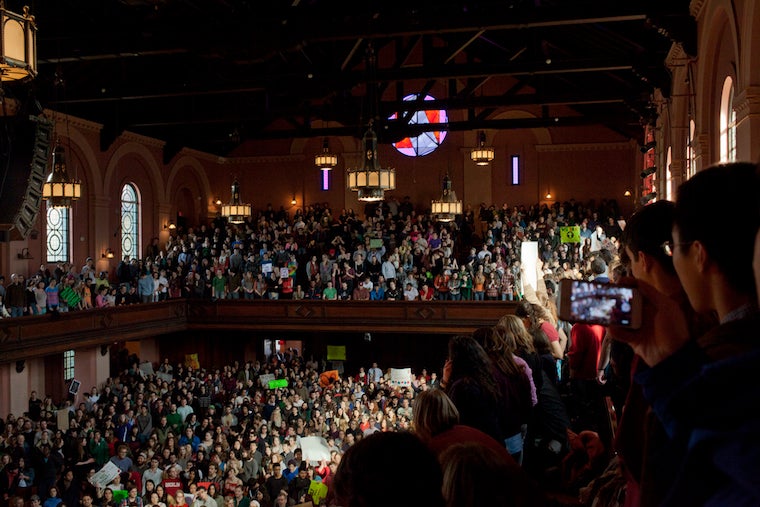 Thanks for your entry, Dale.

I'm very glad to see your pictures and videos. I can appreciate your questions about choosing the most appropriate response to hate crimes, and I enjoyed hearing & seeing the impromptu jazz in the streets. To me, this march was, in one way, a celebration of solidarity and a joyful defiance of intolerance. For me, the message was, "You may try to diminish us with cowardly displays of hatred, produced under cover of night, but we proudly and artistically demonstrate our unity in the light of day."

Thank you so much for this post. I have a feeling that the music is going to be my most lasting memory of everything that happened yesterday. The tendancy of Obelrin students to put together amazing, improvised bands at the drop of a hat will never fail to impress me.

On a less serious note, i love that shot of the crowd in Finney. It's fun to zoom in on it and basically be able to pick out everyone I know in Oberlin.

I agree that, unfortunately, there are much greater dangers in the world than a person walking around in KKK robes, but I heartily disagree that Oberlin's reaction was an overreaction. What are we measuring our reaction against? Sure, we made a bigger deal of it than most other places would've, but that is absolutely the wrong measuring stick.
More importantly, I think that leveling "it only encourages whoever's doing this" as a critique against what was done yesterday misses the point entirely, because - correct me if I'm wrong - yesterday's events weren't put on for whoever's doing this. We sent the message that that sort of action is entirely unacceptable, but that wasn't the point of taking a full day to respond. The point was to take care of the targeted members of our community and to bring together our community as a whole. The response wasn't for the benefit of the perpetrator(s?), it was for us.

Here's why I think this is an important point: if a movement or a struggle can only orient itself counter to something, can only define itself as "not X" or "against X", it will eventually be lost - only if definition and direction come from within the movement is it sustainable. So yes, it's important to stand against whoever that was early yesterday morning, but it is far more important to stand with each other and draw our purpose from our support for the people in our community (as opposed to our rejection of something/someone).

That's why I don't give a crap about how whoever did this is going to react to our little explosion. It wasn't about them. It was much bigger than they could ever be.

That said, nice pictures! And thanks so much for leading us around Tappan. The music was spot on.

Responding to hatred and injustice with music is a heartening thing to do. It also shows your appreciation of the dangers/horrors of NOT responding which in the past led to the holocaust, McCarthyism; and even now the bullying of children in their schools and on their busses

A very appropriate time for a great second line! But don't stop now. Music has always kept spirits alive whether singing voices in Haiti or the fantastic music of Mali; it is there when the people need the music. And the people in this country so need the music now. The Voting Rights Act is under attack even by justices on the Suprem Court. The Violence against Women Act was only just now renewed. Discrimination based on whether one is gay or transgendered is still the law of the land. The ERA is all but forgotten. Thank you for being outraged, just don't stop now.