If I had to rank the most influential things about Oberlin I would put people I've met at the top of the list. Then I would get very stressed out and put classes, professors, history, and organizations all as number two and fail the ranking assignment. But it was the people I've met who convinced me that last summer was something I could do.

I'm not going to say that wanting to travel is a new thing for me, but only because I'm a liar and I want to pretend that I was a much cooler kid than I was. The truth is that when I was in elementary school my parents decided that we should go to Mexico and I actually convinced them we should go to Puerto Rico instead because five-year-old me had the misplaced paranoia of a sheltered forty-year-old mom. I cried when my sister got into a program to travel to Mali in middle school because, rather than any fears of the country, I was sure her plane would go down. I loosened up a little in high school and traveled to Spain and later Mexico (take that, five-year-old me) for dance programs.

But it still seems almost unimaginable that the kid who almost refused to go on a camping trip because she assumed she would be eaten by a bear would decide, after two years in college, that a sensible summer plan was to travel in Europe by herself.

To be clear, the majority of my summer was not alone. Just the part dramatic enough to write about.

Everything started when I was accepted into the Prague Summer Program for Writers. PSP turned out to be an amazing experience. Days consisted of writing workshops and personal conferences with incredibly inspirational writers like Patricia Hampl. I spent a month befriending writers, some new and some experienced, all playing student for a month in the Czech Republic. Life was cappuccinos, life was sunny mornings on the Charles Bridge, life was hard work and first drafts and Czech words, and life was easy. 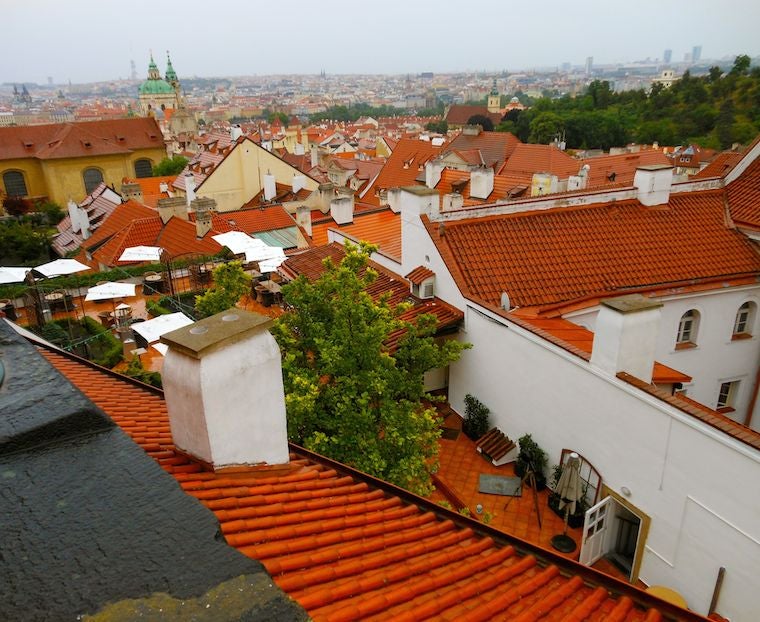 Over the orange roofs 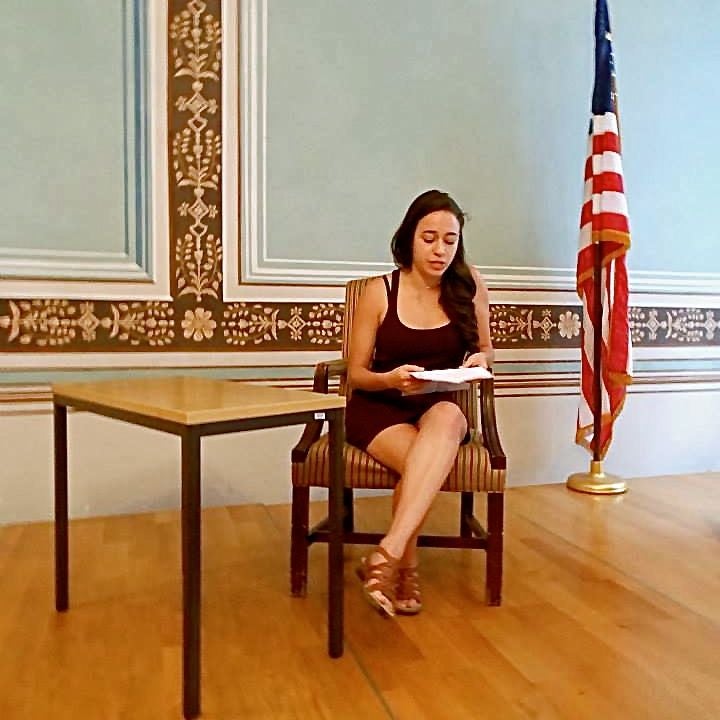 Reading at the American Embassy

And then I decided that, in the five days before I planned to meet up with another Obie at her study abroad program in Copenhagen, I would buy one of those infamously cheap train tickets and hit Europe.

And I would do it alone because those five days became a symbol of my adulthood, of my emergence as independent, strong young woman who could take the world by storm and become a writer and an explorer and yada yada yada. Besides, how much could happen in five days? A lot, Molly. A lot can happen in five days. Do you not remember the getting-eaten-by-a-bear fear?

Here are the things that I learned on the way from Prague to Vienna:
•When you get to Vienna, there will be a big sign that says so.
•You are going to the train station "Wein Meidling." When there are signs at other train stations that say "Wein Meidling" they are indicating that this is the track going that direction.
•They are not indicating that you are there.
•So you do not need to leap up and ask everybody if this is Vienna every time there is a sign that says "Wein Meidling."
•They will not appreciate this.

Here are things that I learned instantly in Vienna:
•There is a reason why backpackers carry backpacks.
•It is because big roll-y suitcases are hard to maneuver getting off of trains.
•If you are caught up in a crowd of backpackers getting off the train, and you have a roll-y suitcase, you might fall off the train and drop the suitcase on your foot.
•You will.
•It will be extremely painful.
•If you leave and find a supermarket and ask for ice, they will not understand you because they speak German and you are speaking English.
•They speak German in Austria.
•They do not speak Austrian in Austria.

Fortunately it transpires that Vienna has very comprehensive public transportation, and not being able to walk will not necessarily ruin your trip. But it will put a damper on it.

The days in Vienna passed with some effort. Not speaking the language, I simply barely spoke, and found it oddly calming. I saw interesting markets, a huge Ferris wheel, castles, churches, gardens, and majestic cafes all from one foot. 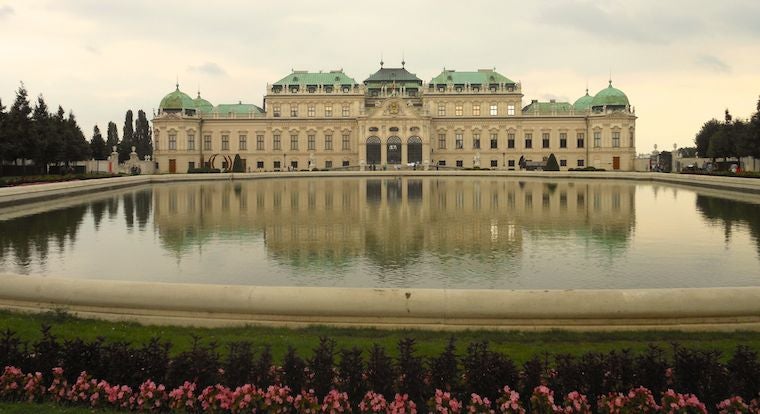 Around this point the laptop I had with me stopped responding to European charge, and the phone I had refused to find service or wifi. I used internet cafes to check in with parents at home and copy long, very specific directions for travel into a little green notebook. I was deviceless, I was officially out on my own. I re-convinced myself that I was the strong, independent woman who was taking the world by storm (if with a defined limp).

My 28 hours in Brussels were food-themed. I spent a short night at a large hostel where upon arrival I was told they were out of lockers. I met my eight new roommates who stared at me without saying anything, and I slept curled around my backpack (the suitcase was luckily still checked with the airport) holding an alarm set for a few hours later. I left before they woke up and took a train to something that in my goofy bits of French looked like "central station."

I walked outside and asked a train attendant in terribly translated French/Spanish with a French accent which way I should walk for one day of exploring. In patronizing English he told me any direction would do, I was at the center of town, and I spent the rest of the day joyfully limping around and eating. I ate a waffle for breakfast, gelato for desert, Belgian fries for lunch. I looked at buildings that seemed exciting without being sure what they were. 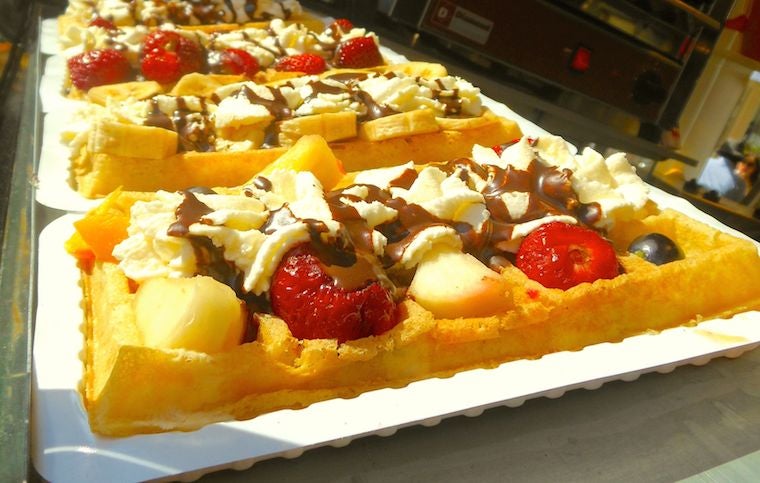 You know you want this waffle

With carefully spelled-out directions on where to find her, I found my friend the next day in Copenhagen and almost cried with joy at not having to navigate anymore. She sent me to her favorite neighborhoods while she had classes, and took me out afterwards. Three days later we went to London together, and then it was time for me to go home. 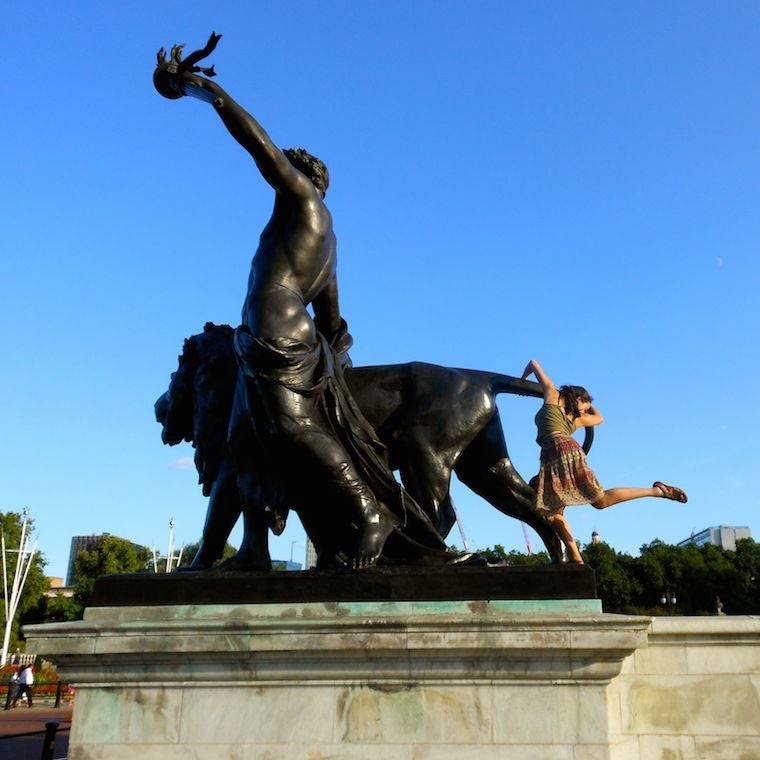 Dancing with a statue at Buckingham Palace 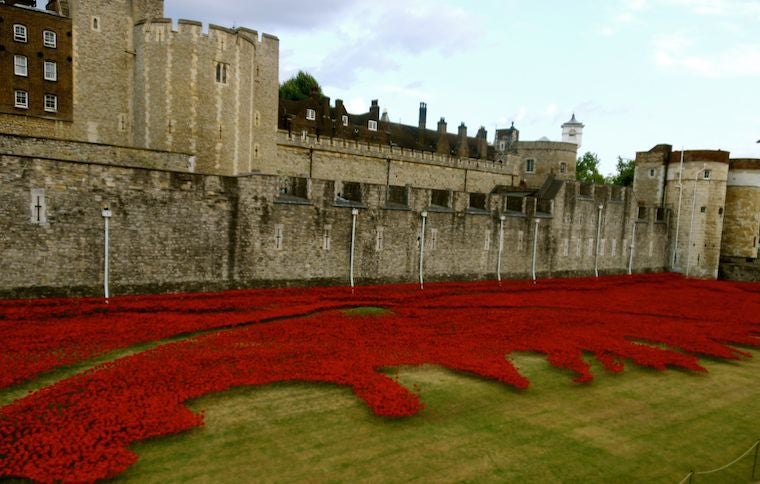 The Tower of London

What I learned going home from London:
•They speak English in England. So there is no excuse for missing an announcement that the train you are on is going a different direction than planned.
•If you miss the announcement and go the wrong direction, get off ASAP.
•If the mess-up causes you to get to the airport an hour late, cross your fingers there is not a mix-up with your seat.
•If there is a mix-up with your seat, be patient.
•If it is figured out, and you have twenty minutes to get to your gate for GODS SAKE don't drop your boarding pass on the floor.
•Go find the boarding pass.
•When you just barely make it onto your flight, don't hug the flight attendant. It's this weird British thing, they find that strange.

When I landed in Boston my boyfriend was at the gate waiting to pick me up. He was holding a container of lentils (I had told him about my difficulty finding vegetarian food; I once ordered a veggie burger and it was just a veggie-burger-shaped piece of cheese) and looking distinctly unfrazzled. I limped up to him, still clutching my boarding pass like it was my newborn child, dragging my hated suitcase.

How was it? He asked from a long hug.

I looked up at him and thought about the possibly broken foot, the big streets and the languages I didn't understand, the non-functioning devices and the impossibility of communication, the lost tickets, the fear of getting lost myself, the moments when I had sat alone in front of a beautiful building and thought to myself There is nobody that I know on this continent. If there were, I wouldn't be able to reach them. I am completely alone.

It was amazing, I said. Absolutely amazing.

I love Vienna! I love Vienna a lot. Probably speaking German/not smashing my foot there/traveling with friends helps, but wow do I want to go back there. Same for Prague. Molly, I think you just gave me a heck of a travel bug.

Shout out to me for being your elusive Danish friend.

Those waffles. That's all.

Actually, not, you described a major fear I've yet to overcome myself, which is traveling alone, even for a short span of time, especially in a place where I don't know the language, lay of the land, or anything else. Eep. You make me want to try, though. You did it, so clearly I can too.

Also I started laughing hysterically at "don't ask every time you see the Wein Meidling sign" because when one tries new things you inevitably return to five year old brain, the one that asks their parents ARE WE THERE YET constantly when traveling.

The five year old brain is so real! And you definitely should try, it's scary but at the end I felt accomplished. And still a little scared.

And Annie, you are a Great Dane.