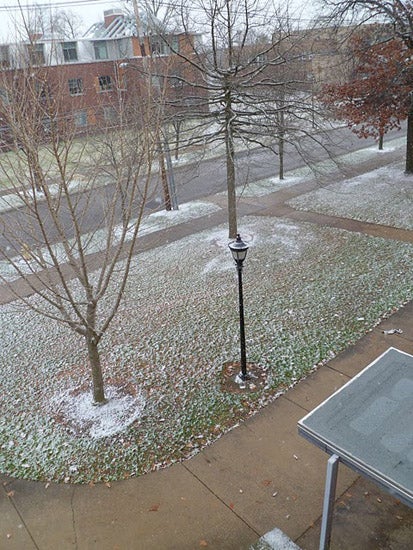 MY FIRST TIME IN SNOW EVER: WEDNESDAY, DECEMBER 1st, 2010

I know, I know. It's just a smattering of snow, and it all melted off within a day. It's also not the best picture ever: this was me excitedly taking a photo at 8:00 am on Wednesday morning before class to send to my parents as evidence that I have experienced my first real snowfall. (More pictures of me frolicking in snow will follow when it starts properly snowing--as in, I-need-to-dust-my-UGG-boots-off-now kind of snow.)

I think I'm allowed to act like I'm four years old, at least the first time round. I moved here from Singapore, where the temperature basically never drops below 30 degrees Celsius/85 degrees Fahrenheit (forgive me if that's wrong; I still haven't got the hang of the conversions and I stubbornly refuse to switch to the Imperial system). I go back to Kolkata (West Bengal, India) during the winter, which is where most of me is originally from but that also never drops below about 10 C/50 F, so no snow. Same with Sydney, where I lived before Singapore, and Indonesia, where I was born, is the same story as Singapore. To cut a long story short, I've never, ever, ever been in snow and I've only ever seen it in the movies or fake versions of it. I've been told that this has been an unusually warm winter, and that it normally snows by October(!!!) but I think it's just wonderful that we could ring in December with a gentle, swirling snowfall.

So, as you can imagine, I was grinning like an absolute idiot on my way to class on Wednesday. Everyone has told me that the novelty wears off pretty quickly once the ground turns icy and you fall on your bum a couple of times or when your jeans get soaked through because snow is basically wet. Well, I have slipped twice (on the same spot, no less) and it's been 4 days, and I can tell you now that it hasn't worn off yet. I'm sure it will when it reaches the depths of -20 C, but hopefully I will be either a) in Singapore for my Winter Term, or b) snuggled inside with blankets and hot cocoa watching the snow swirl outside. Until then, however, I am going to continue to try eating snowflakes as they come swirling down and sit and wait (somewhat) patiently until I can make my first snowmen, snow angels, and participate in ninja snowball fights.

It's going to be AWESOME. You have been warned. Stay tuned!

You guys are gonna love next semester. Just sayin'.

One of my best friends at Oberlin was from South Carolina, and she got excited every time it snowed, all four years. It was really cute. So, yes, the excitement can continue!

It's kind of at the point where I'm still excited by it, and I had my first snowball fight last night which was awesome, but I think I enjoy it a lot more when I'm indoors enjoying a hot cuppa and watching it swirl outside than having to trudge through it. But it's still totally awesome. 6 days on and the novelty has not worn off!