In one of my previous posts, I speculated that six degrees of Oberlin (à la Six Degrees of Kevin Bacon) exists. I've now taken it upon myself to prove this theory. So here we go. 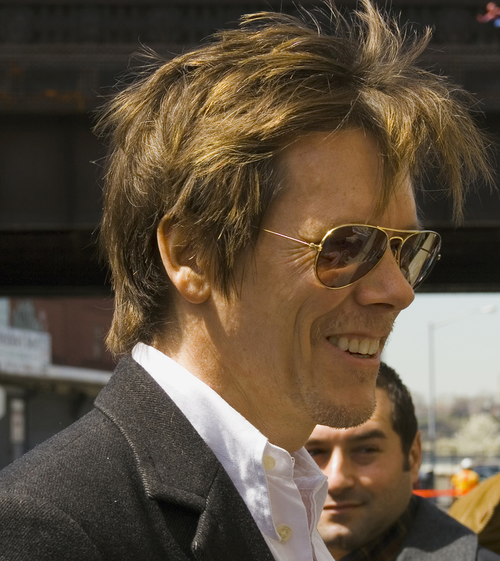 Kevin Bacon, I dedicate this post to you!
This file is licensed under the Creative Commons Attribution-Share Alike 2.5 Generic license.

Once I came up with the idea, I told Ma'ayan about it and we began asking anyone and everyone to name "a famous person who didn't go to Oberlin." Before long, I had a ridiculously long list of a random assortment of well-known figures. Of that list, I've picked a couple that I believe demonstrate how well-connected (and randomly connected) Oberlin is to pretty much everything.

This is my first stab at this. I may, in the future, come back to this and try to connect more people to Oberlin, but I'm going to stick with just this one post on the topic in the meantime. 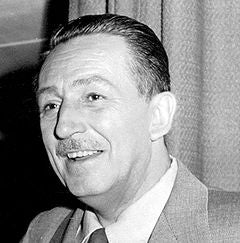 Why: My family and I love everything Disney. I was raised watching Disney movies, the Disney channel, and my family's most consistent vacation spot is Disneyland. It only made sense for me to try to see if I could connect Walt Disney back to Oberlin.
Connections: Walt Disney produced the film Mary Poppins, which starred Julie Andrews in the title role. Julie Andrews played the voice of "Gru's Mom" in Despicable Me, which starred Steve Carell. Steve Carell is/was on The Office with Ed Helms, who went to Oberlin. 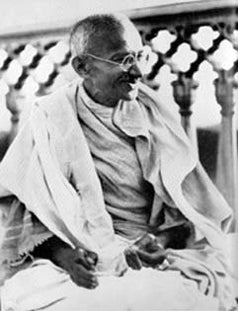 Why: Gandhi came up pretty often whenever I asked people to name someone famous who didn't go to Oberlin. My youngest sister, Sara, actually came up with the way in which I could connect him back to Oberlin. Thanks, Sara!
Connections: Gandhi's ideas of non-violent protest inspired Martin Luther King, Jr. Martin Luther King, Jr. was preceded by Vernon Johns as pastor of Dexter Avenue Baptist Church. Vernon Johns is an alumnus of Oberlin College. 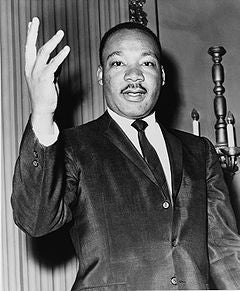 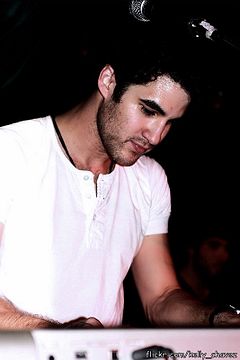 This file is licensed under the Creative Commons Attribution-Share Alike 2.0 Generic license.

Why: Being a self-professed Starkid and fan of all things Glee, I couldn't not connect Darren Criss. Helena also requested that I try to connect him back to Oberlin. These connections came from my friend Ellen. (Thanks, Ellen!)
Connections: Darren Criss was a student at the University of Michigan when the Vice President and General Counsel for the University of Michigan was Marvin Krislov. Marvin Krislov is the current President of Oberlin College. 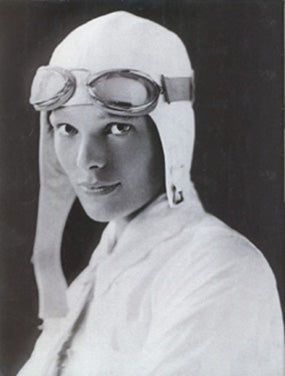 Why: Why not? Well, to be completely honest, I wanted to brag about our connection to the Wright brothers. So here I go!
Connections: Amelia Earhart disappeared during her attempt to circumnavigate the globe by plane, a feat made possible by the Wright brothers. Orville and Wilbur Wright's younger sister, Katharine, is an alumna of Oberlin College and was our second female trustee. 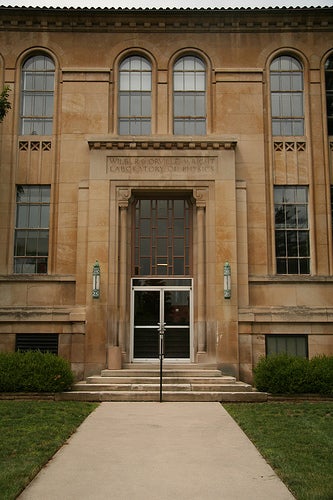 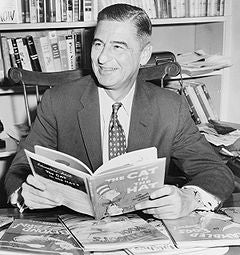 This photo used as per the guidelines outlined here.

Why: 4 March was Dr. Seuss' 107th birthday! The Oberlin Public LIbrary always has a special event to commemorate the birth of one of my favorite authors of books for children.
Connections: Dr. Seuss wrote How the Grinch Stole Christmas, which was made into a film in 2000 with Molly Shannon as Betty Lou Who. Molly Shannon was on the 26th season of Saturday Night Live with Tina Fey. Tina Fey was in Date Night with Steve Carell, who is/was on The Office with Ed Helms. Ed Helms is an alumnus of Oberlin College. 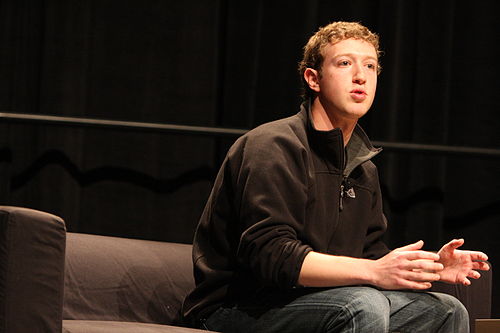 Why: I am completely addicted to Facebook. No other explanation is necessary.
Connections: Mark Zuckerberg was named Time magazine's "Person of the Year" in 2010, an honor bestowed on Barack Obama in 2008. In May of 2009, Barack Obama appointed a new head of the Centers for Disease Control and Prevention (CDC): Dr. Tom Frieden. Dr. Frieden is an alumnus of Oberlin College. 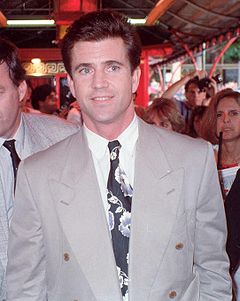 Why: My friend, Jordan, requested this one. Little did she know that this would be one of the easiest connections to make.
Connections: Mel Gibson was featured as the voice of John Smith in the film Pocahontas. Judy Kuhn was featured in Pocahontas as the singing voice of the title character. Judy Kuhn is an alumna of Oberlin College. 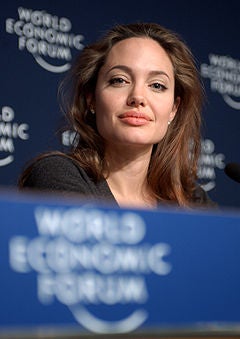 This file is licensed under the Creative Commons Attribution-Share Alike 2.0 Generic license.

Why: Angelina Jolie was also requested quite often by various people. So here we go!
Connections: Angelina Jolie was featured in the film Shark Tale, which also featured Jack Black. Jack Black was a guest star on Will and Grace in an episode entitled "Nice in White Satin." Megan Mullally starred as Karen Walker in all episodes, including the pilot episode, of Will and Grace. The pilot episode of Will and Grace was directed by James Burrows, an alumnus of Oberlin College. 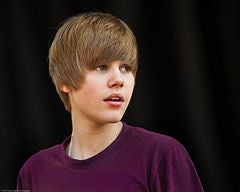 Why: Why Justin Bieber? Because I was filled with glee when he failed to win single Grammy this year. Does that make me a bad person? Perhaps. Oh well.
Connections: Justin Bieber lost the Artist of the Year award at the 2011 Grammy Awards to Esperanza Spalding. Esperanza Spalding is not only performing at Oberlin this month, but she is also a former teacher of a member of Oberlin's current tour guiding staff.

"Isn't this cute! It's like a little loser family! Hogwarts has really gone to the dogs. Luckly next year, I'll be transferred to Pigfarts!" - A Very Potter Musical

I recently visited Oberlin for the Junior Visit Program and while I was there, I attended the Student Panel. (I had a lot of fun by the way; all of you were very informative!) I remembered your upcoming blog and wanted to check it out. I really liked this blog and decided to develop one of my own.

30th U.S president Calvin Coolidge is the first cousin twice removed of Orson Bean, a popular actor and game show panelist. Orson Bean is from Burlington, VT, which is also the homeland of the first Ben & Jerry's ice cream store. Jerry Greenfield co-founded Ben & Jerry's and is also an Oberlin alumnus. (I personally think Ben & Jerry's should have a day when every Oberlin student, past and present, gets a free ice cream. That or on graduation day, all the graduating students receive a free ice cream.)

@Marian: Oh my gosh. You earn ALL of the prospie points! I'm glad you enjoyed the junior visit program (despite our somewhat miserable rainy weather). Also, kudos for coming up with your own degrees of Oberlin! I am thoroughly impressed!

Great post! I have to comment on all of the people! First, Walt Disney! Go Disneyland!! Gandhi: Thank you very much for giving me credit! Darren Criss: What else is there to say but GO GLEE! Amelia Earhart: is awesome!
Dr. Seuss: Happy B-day! Mark Zuckerberg: of course, facebook...:) Mel Gibson: You are obsessed with Judy Kuhn being an Oberlin alumnus! Angelina Jolie: I really don't have a comment for her. Justin Bieber: He didn't win a Grammy! YAY!

By the way, if you do another six degrees of Oberlin, connect Reese Witherspoon!! :)
Sara

@Sara: Yay! I'm glad you enjoyed it. And, since you requested it:

Reese Witherspoon was in Four Christmases with Kristin Chenoweth, who was a guest star on Robot Chicken, which features Seth Green as a variety of characters. Seth Green was in Family Guy Presents: It's a Trap with Michael Dorn, who was on Star Trek: Deep Space Nine with Avery Brooks, who is an Oberlin alumnus.

I did it that way so I could use another alum as a connection, rather than using the ones I mentioned above.

Additional fun fact about MLK: he was the graduation speaker for the alum who interviewed me in Hawaii!

Can you connect Alfred Nobel? Or Albert Einstein?

As for Alfred Nobel:

In 1895, the will of Alfred Nobel established the Nobel Prizes.

In 1923, Robert Millikan won the Nobel Prize in Physics for his measurement of the the charge on the electron and his work on the photoelectric effect.

In 1981, Roger Sperry won the Nobel Prize in Medicine for his work with split-brain research.

In 1986, Stanley Cohen shared the Nobel Prize in Physiology and Medicine for his research on cellular growth factors, which has been instrumental in understanding the development of cancer and the creation of anti-cancer drugs.

Robert Millikan, Roger Sperry, and Stanley Cohen are all alumni of Oberlin College.

I'll get back to you on Einstein :P

Thanks for Mel.
Also, that is a HUGE photo of Kevin Bacon. Thumbs up.

Maya Angelou holds an honorary degree from Oberlin. She was an extremely close friend of Jessica Mitford. Jessica, or Decca, Mitford was one of the "Mitford sisters" who, among them, could count as close friends such diverse personalities as Katherine Grahame, Diana Cooper, Cecil Beaton, James Lee-Milne, Evelyn Waugh, JFK, and Hitler. They were related to Churchill, and one of the sisters married Mosley, the fascist leader in England. Among them they also knew Goebbels, Mussolini, Goering, General de Gaulle, George Bernard Shaw, etc. etc., all of whom were pretty well connected . . . . If honorary degrees don't count, I'm sure there is some other link to Jessica Mitford.

You made some very cool connections. & I love that you put Darren Criss in here! I'm glad that people at Oberlin won't think I'm weird when I start singing songs from AVPM. Thanks for the post, it just makes me want to go to Oberlin even more!

Oh my gosh! ALL of the blog comments! I'm so excited.

@Jordan: Any time, my dear. I will randomly connect crazy celebs back to Oberlin any time you get bored. I do, after all, live with you.

@Laurie: Thanks! And yes, Starkid is appreciated everywhere, I'm pretty sure. I may or may not listen to/watch AVPM/AVPS obsessively. And I did, you know, drive to Chicago to see Starship. Ultimate fanguy status!

This is a cute post. I do think it's cheating to use Steve - Ed Helms as the final factor more than once though. There are so many wonderful alumni that it seems a shame to not use a different shortcut to connect to all of these people.

@Sandhya: BEAUTIFUL. I love it when people can come up with their own six degrees. And yes, I definitely took the lazy way out by using Steve - Ed Helms more than once.

Correct me if I'm wrong, but I thought this game was supposed to connect people who actually had crossed paths, and I thought that each person was to connect with one another until leading back to Mr. Bacon. Not trying to be tough, but maybe I don't know..regardless, you guys REALLY put a lot of work into this. Oberlin is an amazing school. My cousin goes there, so I'm 2 degrees of Oberlin :)

@Patsy: You may be right, but I figured it would be a fun way to show the random ways in which most of these people connect back to Oberlin. I inadvertently had most of them crossing paths anyway, so it's all good :)

Oh, and thanks to Ma'ayan for passing along that people are still reading and commenting on my blog posts! I can't believe it's been almost a year since I graduated!