Every Wednesday, the famous Sainkt Peders Bageri, only a two minute walk from my apartment, sells 15 kroner ($2) cinnamon rolls the size of your head. They are so big that you'll want to replace lunch with them, so I try not to go every week. 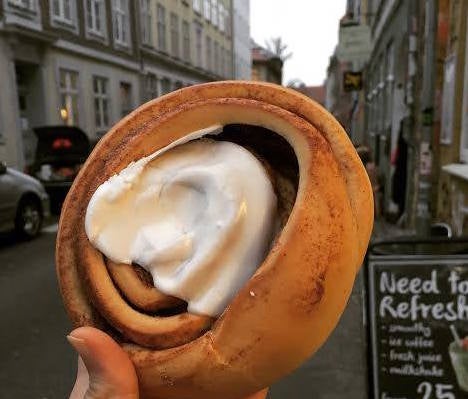 While in Helsinki with my core class, we visited a traditional Finnish smoke sauna and sat with a bunch of sweaty strangers in a boiling room at upwards of 120 degrees for about two hours. We took several breaks throughout to jump in the adjacent frozen lake, pictured below. 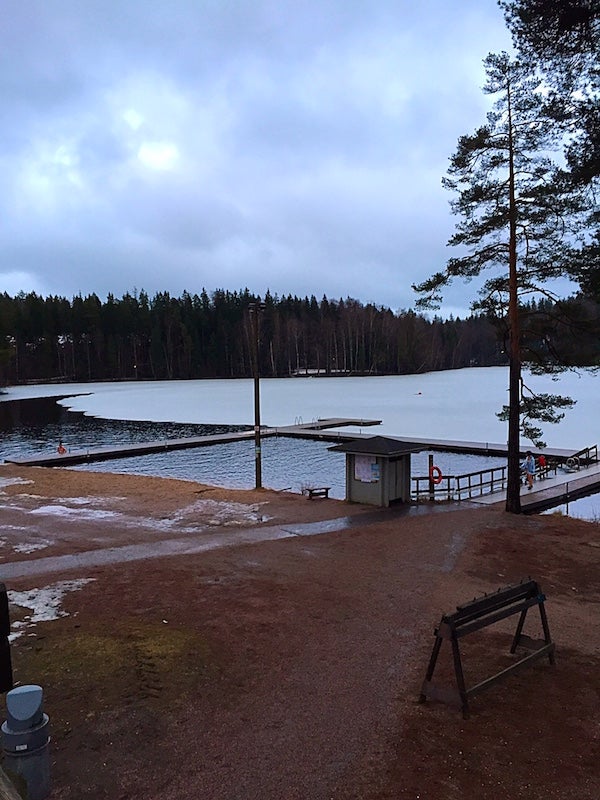 In many ways, visiting Tallinn felt like being transported back in time--in addition to the vestiges of Soviet rule throughout the city, many of the more touristy places seemed downright medieval in their castles, equipped with drawbridges and moats. The first night we were in the city we went to a medieval dinner and had a feast. While the food was bountiful it wasn't always the tastiest, but I did have some yummy cheese and, without my knowledge, cow tongue jelly. Oops! Here is a picture of me from the night with my friend Lindsey. 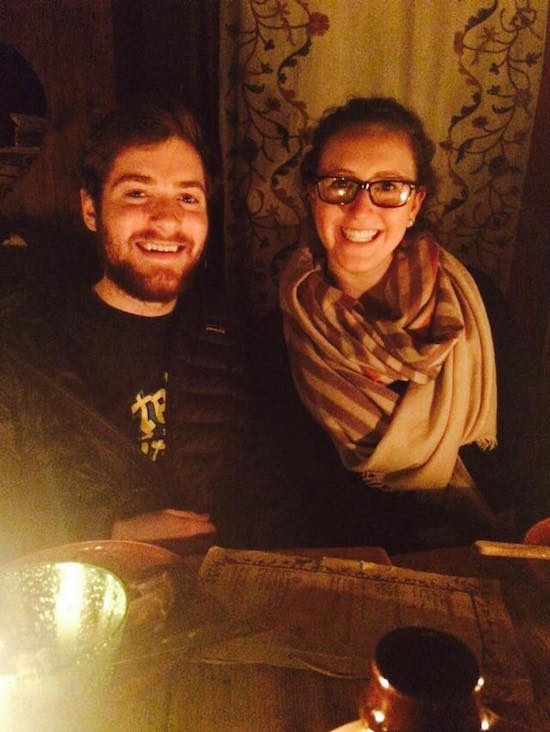 Why did I post a picture of babies on the street, you ask? Danes like to boast about the trust they have with other Danes, which explains why it's not unusual to see several babies left unattended outside cafes or grocery stores while their parents are inside. Ironically, bicycle stealing is a huge issue in the city. Danes won't steal your baby, but make sure to double lock your bike! 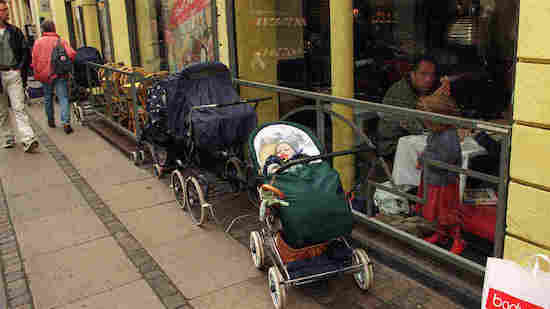 The enormous Rosenborg castle, located a couple minutes from my apartment, was King Christian IV's "summer home." While it resembles no other summer home in the world, it's fascinating to see how luxuriously royals lived back in the day, and the coolest part is you can see all of the crown jewels up close in the basement. In fact, when I visited with my friend Kayla, the castle was put on lockdown because an alarm went off in the treasury where the jewels are housed. While it turned out to be nothing, it was pretty hilarious because everyone who was in the expansive courtyard outside had to stand completely still, frozen in their poses, for about 15 minutes. Try to ask people in America to stand still like that and they'll laugh in your face, but Danes are much more cooperative! 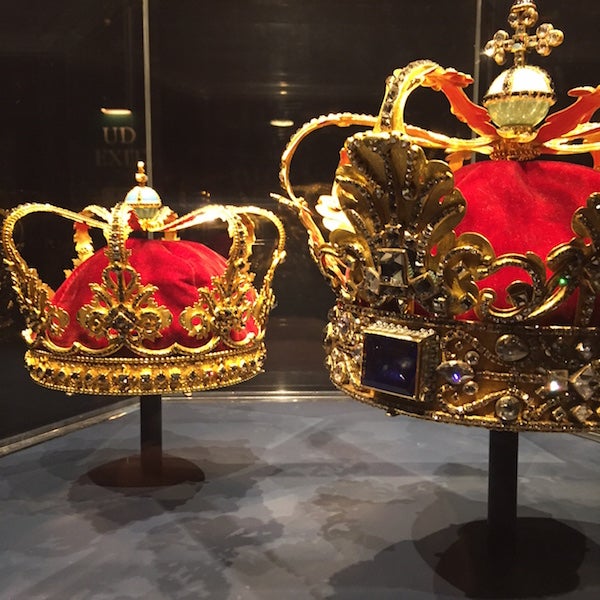 Pretty much anywhere in Europe is known for its art, so I've made sure to go to art museums whenever and wherever I can. My two favorites so far were probably the Astrup Fearnley museum of Modern Art in Oslo and the Van Gogh museum in Amsterdam. In the former, I saw several famous pieces by Damien Hirst and Jeff Koons that I actually learned about in the intro to art history class that I took freshman year! And in the latter I saw numerous classic works by my favorite artist, and learned a ton about his life as well. Below is a picture of the stomach-churning "Mother and Child (Divided)" installation by Damien Hirst. 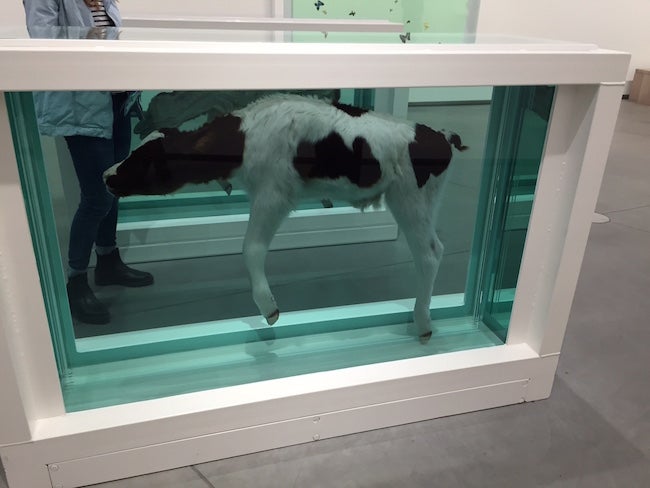 Does this piece of artwork need an introduction? I think not--but in case you couldn't tell, I saw this in the Van Gogh museum in Amsterdam. 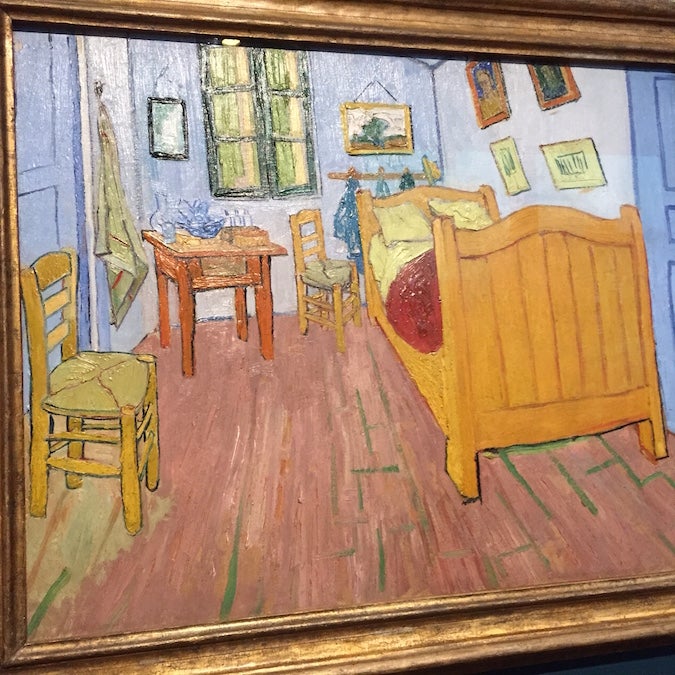 Here is me intrigued by a piece of art at the Statens Museum for Kunst during one of their SMK Friday parties, where they open the museum on Friday nights and let in hundreds of visitors for a night of exploring galleries and watching cool performance art. 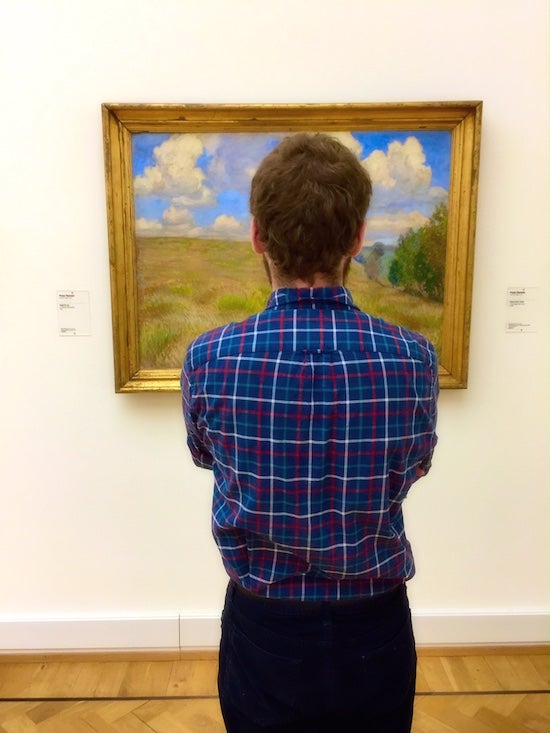 When my friends and I went to the Van Gogh museum in Amsterdam, there was a free painting workshop where visitors could come in and paint their own painting using acrylics and brushes supplied by the museum. It was really awesome, and gave me a better souvenir than I could have ever bought in the gift shop (though of course I still bought a mug there too). Here's a picture of the painting I made in what was a very relaxing twenty minutes. 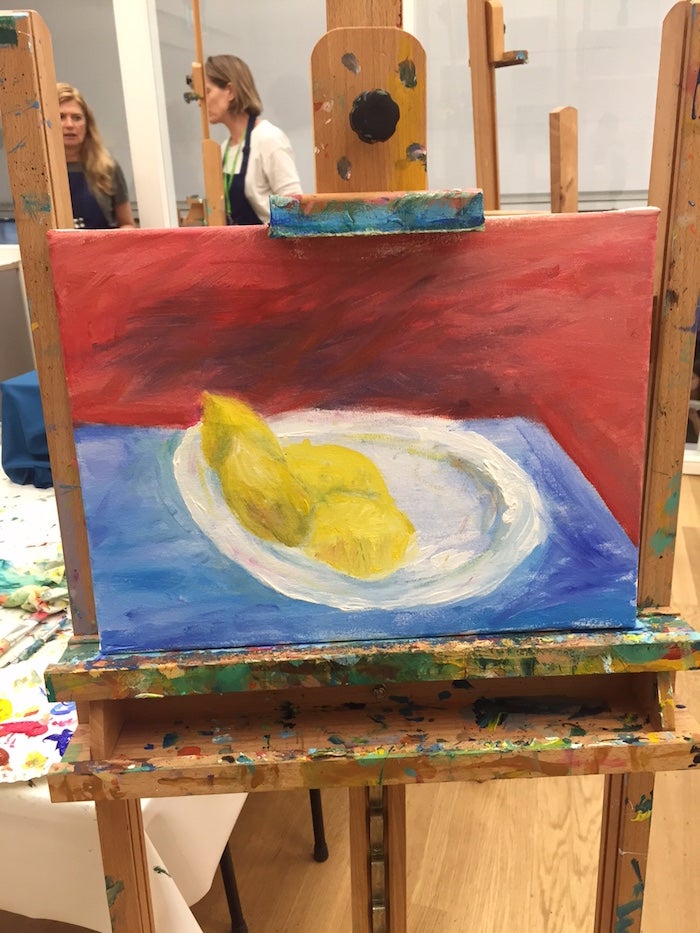 This is a picture of me and my friend Gaby at the Louisiana Museum of Modern Art in the installation "Gleaming Lights of the Souls," by Yayoi Kusama. With hundreds of hanging lights in a room lined with mirrors, standing in the room feels like you're floating in a psychedelic outer space. 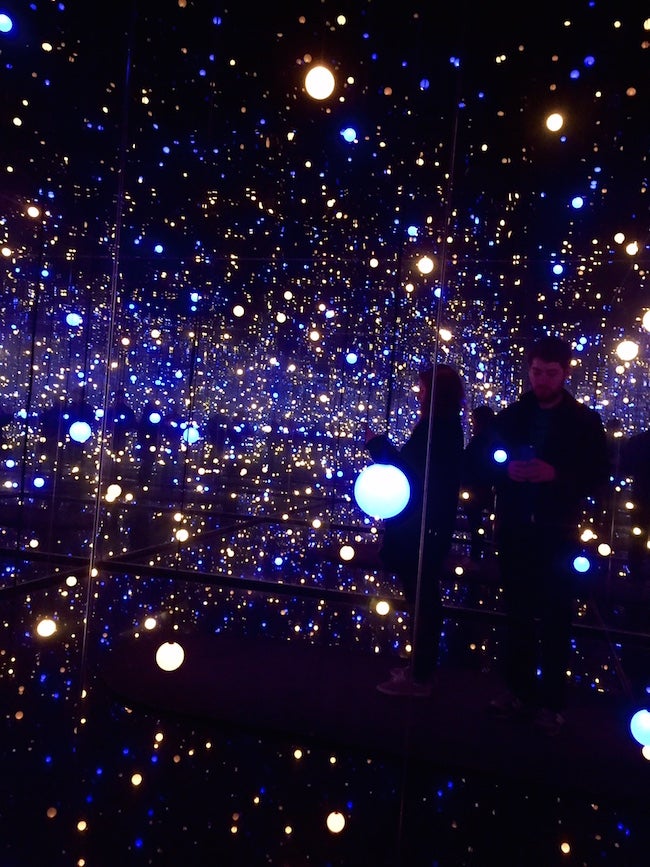 Here's a picture of a Willy Wonka-esque room in the Heineken brewery in Amsterdam, which my friends and I toured. 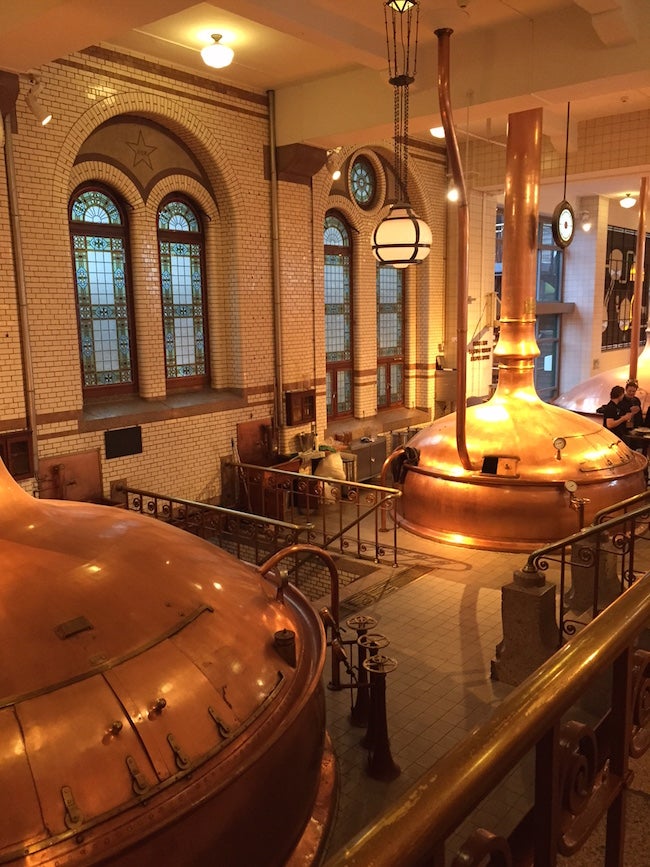 Practically everyone in Copenhagen bikes--no matter the weather, no matter the distance. I rented a bike this semester, which I've used several times for day trips around the city. 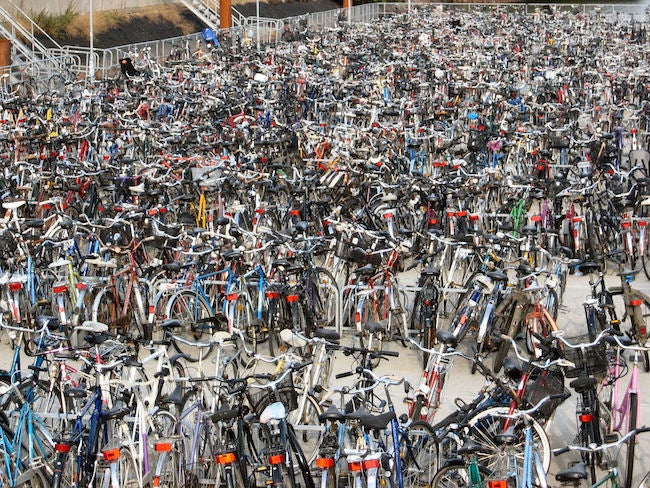 People in Denmark are really obsessed with Hans Christian Andersen, because he was born in the country. When I visited Odense, his hometown, with my core course, we got a three-hour walking tour of the neighborhood he grew up in, and while I was a little tired by the end ("This is the building where his uncle did laundry once" is a direct quote from the tour), it was really cool to see where the literary great lived when he was young. The Little Mermaid statue is one of the main tourist attractions of the city, and there are crowds of people there around the clock taking pictures with it. The small statue itself is sort of a let down, but the park around it is beautiful! 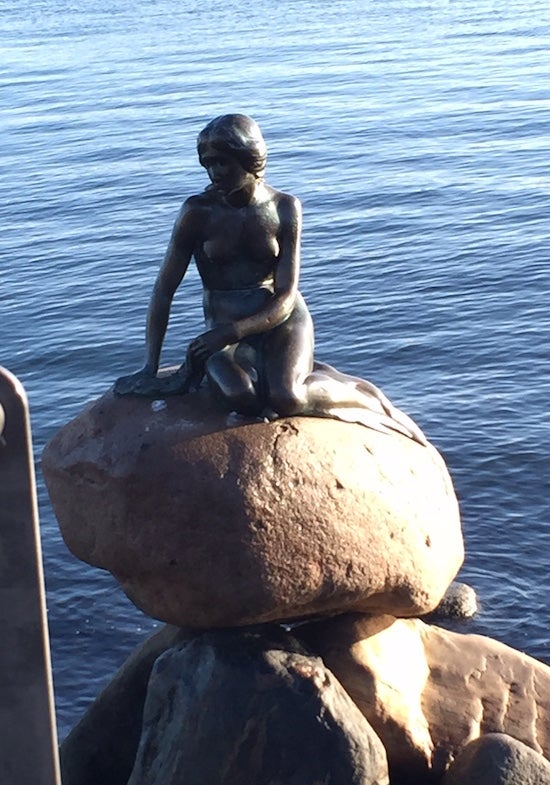 The Cheese Museum was one of my favorite places in Amsterdam. Just a few rooms, this "museum" is really more of a glorified store, where there are free samples of hundreds of different types of cheeses. My favorite was probably the pesto truffle cheese, which I could eat forever. 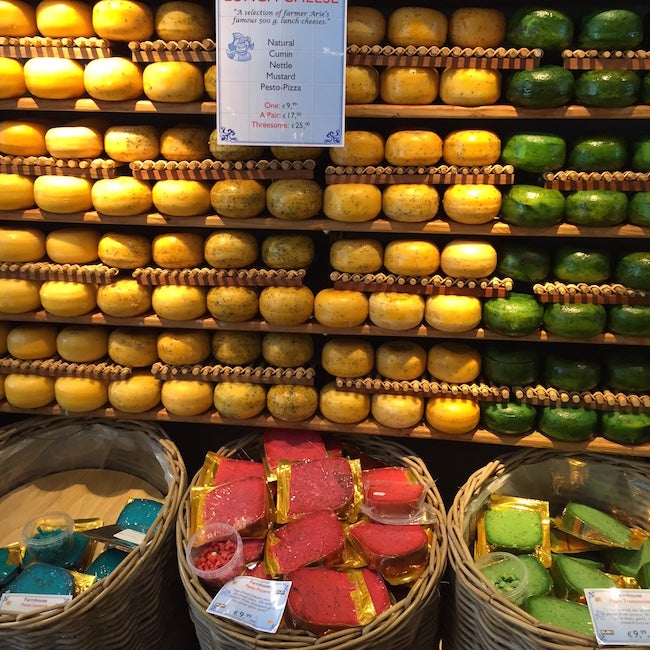 While I knew there would be lots of canals in Amsterdam, I didn't quite realize that every single street in the downtown area would have one. This proved to be a problem when directions given by a stranger were "turn right when you see the water," as all we could see--in every direction, at all times--was water! 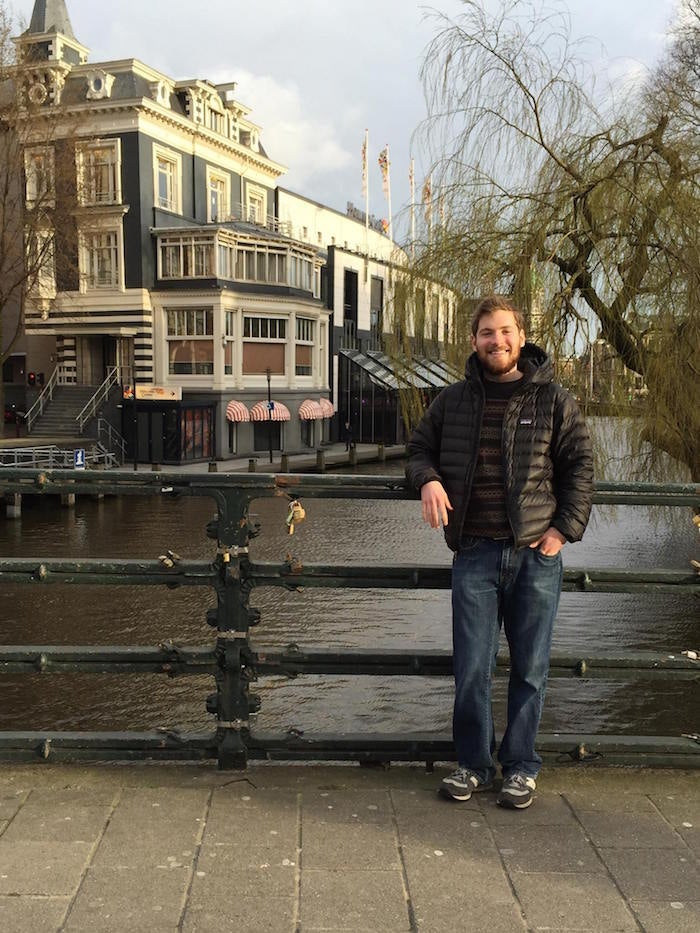 It's really hard to capture in words how powerful the Anne Frank house is. Perfectly paced and perfectly designed to communicate Anne Frank's resilience in a time of complete desperation, I cannot recommend this museum enough. We got there at 7:45am on a Monday, and even though it opened at 9:00, the line wrapped around the building several times and we didn't get in until 9:45. As a grandson of three Holocaust survivors--including one who lived through Auschwitz--and of several others who perished in the war, I felt oddly satisfied as I waited in the cold for two hours that the museum is still so sought after by travelers from all over the world. All I could think about was how good it is that people still want to learn about these tragedies that occurred almost seventy years ago, even if many of them have absolutely no connection to the events at all. Museums like these succeed in ensuring that their visitors never forget the lives that were tragically lost in the Holocaust. 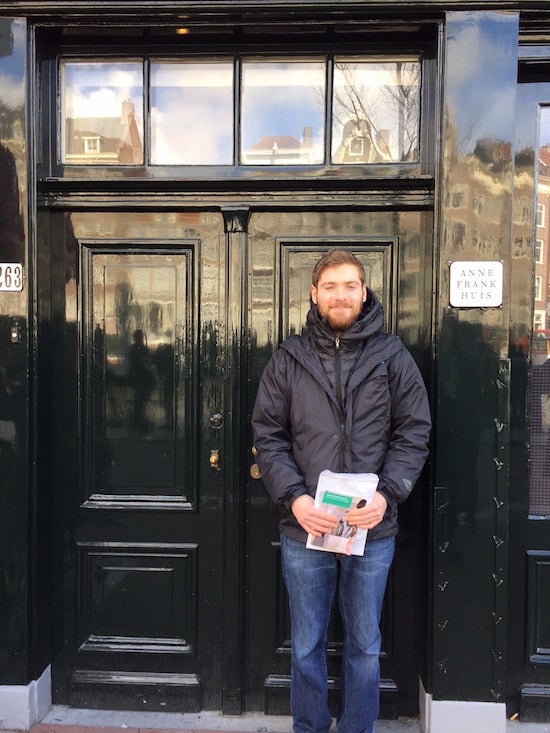