I woke up at 8am, after a fretful and sleepless night on Wednesday, November 9th, 2016, to find myself in a new world.

A world where Donald J. Trump will be the 45th President of the United States.

I opened my phone, scrolling through the news and reactions of Oberlin and the world, paralyzed in my bed, reading but not really comprehending. For all of this long, frustrating, depressing election cycle, I had never once actually considered the possibility of a Donald Trump Presidency - it just didn't seem possible.

My Oberlin bubble had been brutally shattered: I truly, finally, emotionally realised that there are problems in this world, and that they are so incredibly real.

For the first time in my life, I felt like I was a part of the world around me, and I felt the pain and fear.

My own problems suddenly seemed pointless in comparison.

See, in these last weeks since Fall Break, I've had a hell of a time. I've gone through my first real break up from my first real relationship, which sucks a lot more than I anticipated. But now? Donald Trump has been elected.

I finally went through the motions of eating breakfast, showering, putting clothes on, and leaving my dorm room.

The sky was dark and gloomy; the sun nowhere to be found. I stumbled to my first class, blank and distraught.

Systems seemed to be a blur. Our professor offered for us to try and do some work as normal, or to just talk it out, and we elected to do the former.

Then I was already at my co-op for lunch. Someone was visibly crying. We watched the livestream of President Obama's address, in what was probably the first time I had actually watched a sitting President speak live. The moment wasn't lost on me.

I found myself at my Dance class. Our Professor invited the half of the class that showed up to sit in a circle and just decompress. We talked about how we felt - and someone mentioned how their pursuit of an art degree suddenly felt worthless, and they worried that they wouldn't be able to make real change in the world through art.

But our Professor had an answer for them - she had similar personal struggles with an existential crisis over a decade ago in the wake of another historical moment. She said that with dance, she can create the world that she wants to live in, and make her environment as loving and inclusive as possible.

Maybe it sounds like something you've heard before, but something about the genuineness in her answer began to pick me up. I began to think about how I, in my own life, can make the world around me better.

Somehow, I escaped the crushing existential crisis for an hour to work on my Systems lab, but I couldn't for long. I made my way to the Faculty Panel on the election, which filled up one of our largest lecture halls, and was broadcast all over campus on the radio. There must have been at least a thousand Obies in that hall, and probably a thousand more listening all across campus. 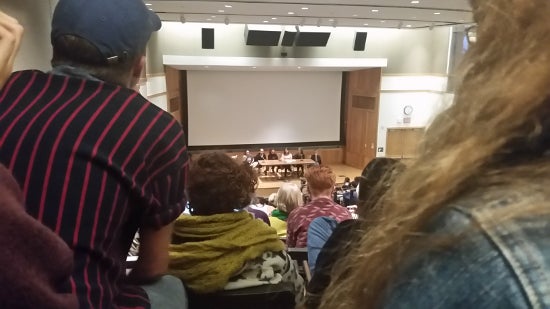 I felt like I was a part of history.

And I finally felt an urge to do something.

It speaks volumes of my privilege and relatively sheltered upbringing in New Zealand that I was so shocked at the outcome, that I haven't been that politically active (maybe ever), and that in the past few days, I've been able to return to some sense of normalcy. Because of my identity as a white, straight, cis male, politics is an option.

My identity, rights, and life aren't threatened under a Trump Presidency - but the same can't be said for others. He has famously promised to build a wall, to carry out mass deportations, and to 'temporarily ban' Muslims from entering this country. Even if he's too blisteringly incompetent to follow through on anything, his victory will (and already has) emboldened the most hateful cohort of his supporters, including white nationalist groups.

This is absolutely unacceptable.

I will no longer let myself be complacent in my privilege - and I'm ashamed that it took this long for this realisation.

It's on me, and everyone else with privilege, to be good allies, to fight back against hate, but most importantly - to reach out across the aisle to the Trump supporters, to open up conversations and progress social justice.

I don't know quite yet how to do all that - but I will no longer sit back and do nothing. 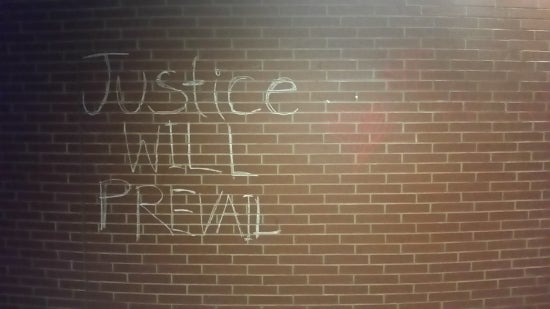 But really, over that fateful Wednesday, what brought tears to my eyes was the incredible outpouring of love. I saw my Oberlin community come together in so many beautiful and touching ways - in my classes, at my co-op, at the faculty panel, at tumbling, and even through random strangers.

I've never been more proud to be an Obie. 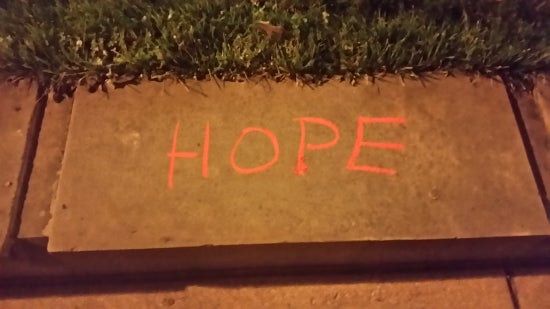 I finished that day with my best friends, laughing as we distracted ourselves with YouTube videos. 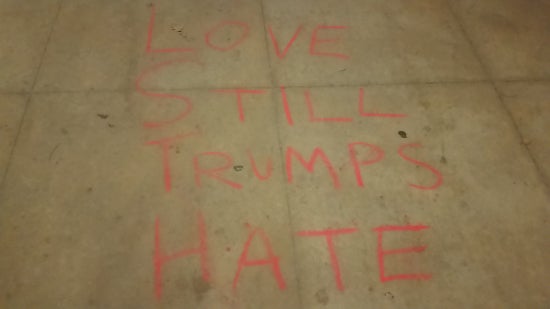 Love will always, always, ALWAYS trump hate, but it's on us to make sure that there's love in this world.