As I have blogged about previously, I am part of a wonderful organization called Active Minds. Oberlin's chapter, which I currently run, is less than a year old, and yet we've been able to do some incredible things on campus throughout this year. When I last blogged about Active Minds, I did an overview of our chapter's brief history. Now, less than a year since our charter was approved by Oberlin's General Faculty, I want to tell you about two events that Active Minds sponsored on 11 April.

In January, I was contacted by the chapter coordinator (Becky!) who oversees the midwest of the U.S. for Active Minds, Inc. She told me that Oberlin had been selected as one of several schools to host Send Silence Packing, an educational tour designed to raise awareness about suicide on college campuses. This event features 1100 backpacks representing the 1100 college students who lose their lives to suicide annually. Some, but not all, of the backpacks feature stories of individuals who have lost their lives to suicide. Not only is this event something that I believe to be extraordinarily important, but I knew it would also be a huge opportunity for Active Minds at Oberlin to stimulate conversations about mental health on our campus. 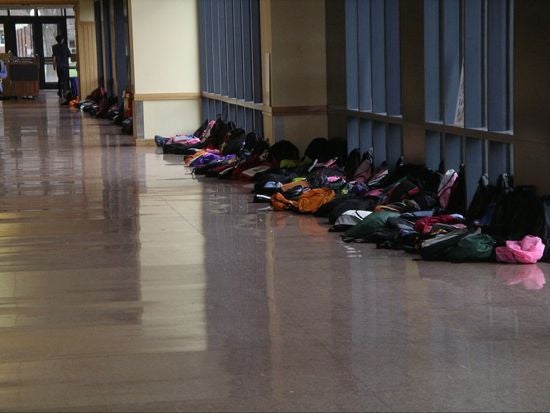 We were actually lucky enough to receive press coverage before the event began. I wrote a press release (with some editing assistance from the wonderful Brandi Ferrebee) and sent it to Brandi in Communications, as well as Oberlin's student-run newspapers. The Communications Office wrote a story about the event for the homepage and Cleveland's local Fox station covered the event as well. 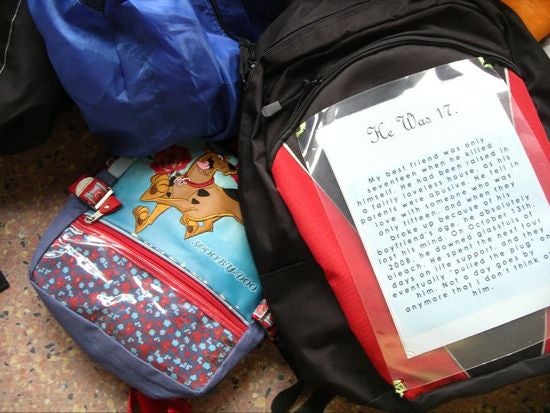 On the day of the event, a thunderstorm started around 7:30am, so we were forced to change the location of the event from Wilder Bowl to the Science Center, which, at first, didn't seem like it would be a problem. We encountered some bureaucratic mishaps (which required not one, not two, not three, but FOUR different people inspecting the display to be sure it didn't violate the fire code - isn't bureaucracy wonderful?!), but everything worked itself out. 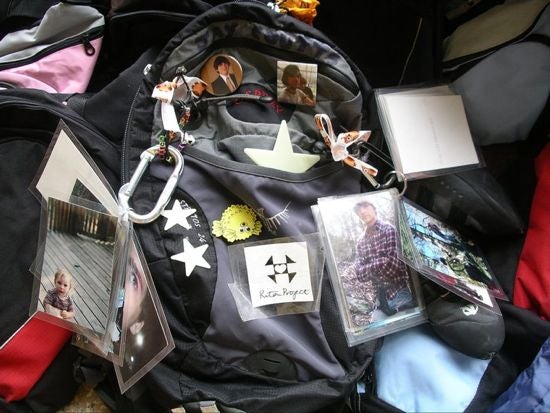 Nicole, one of the Active Minds staffers, blogged about her take on the event. Overall, the people I talked to were glad that we were able to have this display on campus. There were some, however, who were less than thrilled. One of my friends on Facebook (who shall remain nameless for the purposes of this blog) posted something along the lines of the following:

"The Science Center really needs to stop hosting depressing events. My day is stressful enough without being reminded of child abuse and suicide."

To say that I was disappointed when I read this would be an understatement. This person has since deleted this status, but it did not go unnoticed. And in response I would like to say the following:

I'm sorry that for a week, the Center for Leadership in Health Promotion decided to recognize Sexual Assault Awareness Month (not child abuse, necessarily) by using a display in the Science Center hallway. I'm sorry that, for less than 8 hours, Active Minds thought it might be a good idea to let people with suicidal thoughts on our campus know that they shouldn't be afraid to seek help. I'm sorry that for one day we interrupted the cushy comfort of your life to bring attention to the fact that every year 1100 college students feel so trapped, lost, and hopeless that they decide to kill themselves in order to end the pain. Most of all, I'm sorry that comments like yours are the reason that so many people who suffer from mental health problems are afraid to seek help. Perpetuating the stigma associated with these issues is a terrible thing and I hope that, eventually, you will come to realize this fact. End of rant. 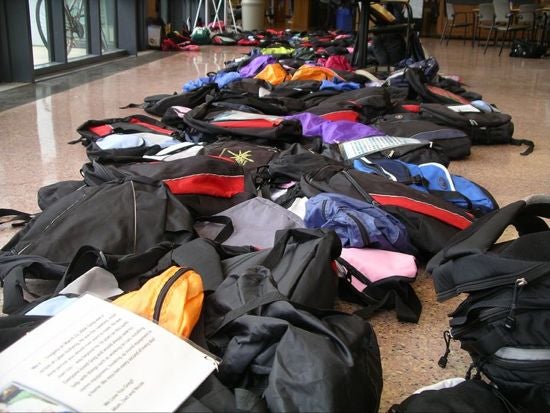 For every homicide in Ohio, there are two suicides.
Photo courtesy of Josh Perry.

As a follow-up to Send Silence Packing, we revived "Eat, Sleep, and Be Merry: Perspectives on Mental Health at Oberlin," which was a panel discussion featuring three outstanding administrators - Lori Morgan Flood, Associate Dean and Director of Wellness and Health Promotion; Charles Ross, Director of Student Health and the Counseling Center; and Betsy Bruce, Director of Recreation and Club Sports. The panel discussion had an upbeat focus, with the panelists talking about various resources at Oberlin, followed by a Q&A that led to a discussion between the panelists and the students who attended the event. 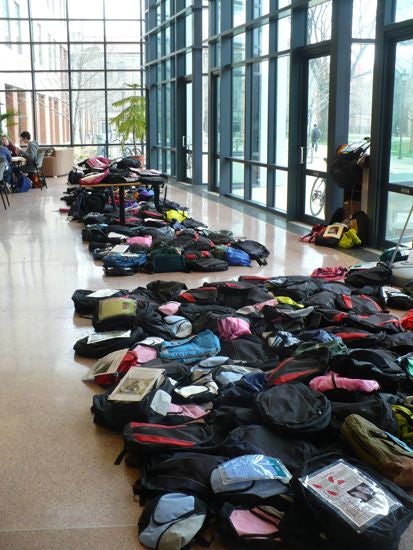 LGBT youth are up to four times as likely to attempt suicide than their heterosexual peers.

Overall, I was pleased with how the day went. I've had many people come up to me and tell me that they were glad we were able to bring this event to campus. Students, faculty, and staff stopped by the display throughout the day, many choosing to read through all of the story backpacks that are always featured as part of the display. It was an emotionally heavy day, but one that I hope will stimulate conversations about mental health at Oberlin.

For more information about suicide, including warning signs and ways you can help, please visit the National Suicide Prevention Lifeline website and the Trevor Project website. 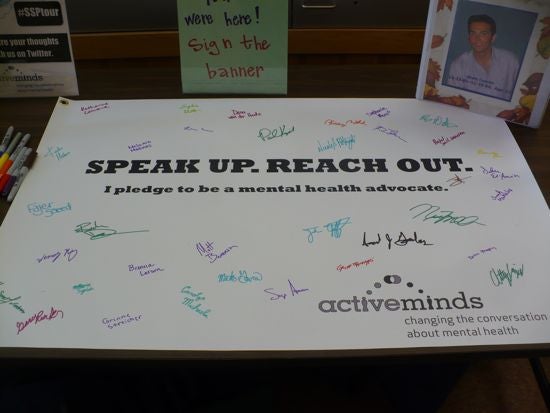 In the United States, more than 34,000 people die by suicide each year.

"I was able to talk to a few students and their conclusions were that because Oberlin focuses highly on academics and Oberlin students hold very high standards for themselves, they sometimes forget the importance of their mental health. I also believe that this stands true for many other universities as well. Another student told me that she was unaware of the severity of the topic and that she thinks that many other students may feel the same way. Even though the students aren't starting conversations with us today, they are going to class or going back home thinking about what kind of an impact suicide has on people and ways to take care of themselves so they can get help before being lost to suicide." - Nicole Pietrzak, one of the Send Silence Packing staffers.

Thank you so much for putting this together, Patrick. I know how hard you worked on it, and it sounds like it was a great event, despite the weather and bureaucracy. I'm so glad Active Minds is getting so, well, active! Oberlin has always been willing to dive into the really hard but important questions in life, but I was always surprised by how little real focus there was on the issues of mental health. So glad the tide seems to be changing!

Patrick, you are correct that mental health needs to be given a high profile on college campuses. Send Silence Packing is a visually effective reminder of the scope and impact of depression and suicide, and I'm glad Oberlin took the opportunity to be a showcase for this important issue.

That said, I wouldn't be too hard on the student who commented that the display only made his/her day more stressful. That person might well be one of the people who needs your services most. Many people who feel highly stressed or deeply depressed DO feel even worse when confronted by such an emotionally raw situation. It reminds that person of the painful issues in his/her own life and the fear that comes with trying to deal with those issues. Maybe suicide has been in the back of that person's mind. Now, I don't know anything about the person who wrote that remark, and maybe it was just a flip comment. But there could be other people who felt the same way for authentic emotional reasons. Instead of ranting, it would be more helpful to acknowledge the honesty of their feelings and offer to listen to what caused them. The links you provided at the end of this blog are definitely helpful, and I am glad that you are working so hard to promote mental health on campus!

@Ellen: Thanks! You're the best.

@Obie Parent: As someone who has struggled with depression, I do understand that events like Send Silence Packing can be emotionally jarring and result in responses similar to those of the anonymous student who I referenced in this post. However, the comment, combined with the conversation that continued as comments on the status, lead me to believe that this student was perpetuating the stigma associated with mental health issues (in this case, suicide).

My rant was the manifestation of my frustration with the fact that this student viewed the display (in addition to the display sponsored by CLHP) as a nuisance. I am always open to having conversations about these issues, but, in this case, I needed an outlet in which I could post my thoughts about the comment made by the student. Considering the fact that I was blogging about this event, I believed it would be best for me to include this comment, since it embodies the struggles of Oberlin students to be able to have open and frank conversations about mental health issues. Furthermore, as someone who is a survivor of child abuse, I was unable to hold back my frustration. I struggled for my entire childhood with the fact that it was not socially acceptable for me to be open about the fact that I grew up being abused by one of my parents, and I could not allow the ignorance and flippancy expressed by this students comment to go unnoticed. Since this student deleted the status and the resultant conversation, I wanted to be able to express my thoughts and feelings in this forum.

That being said, you make several valid points. Perhaps it was not entirely appropriate for me to rant about these issues, but I will not continue to hold back my thoughts on these matters after being forced to do so for eighteen years. Your comments are duly noted, and I'm glad that you took the time to leave them on this post.

Despite the bumps, I am very very pleased at the success of this event. I wish I'd been able to visit in person.