Last week, as you may recall, I discussed half of my academic schedule for the past semester--French, English, and Fencing. Except for the fencing, it was very arts/humanities focused (and I'm sure a case could be made that fencing is an art form as well). Now for the rest of the classes: Psychology 100, Neuroscience 201, and--this week's outlier--the Genre Fiction Writing Workshop ExCo. So this is the science-themed week.

However, before I get into this, I know there will be some people out there who have an issue with my last sentence, claiming that Neuro is a science but Psych isn't. To these people, I say merely: social sciences are still sciences. They are different from the natural sciences, and there's less chance of things blowing up or new energy sources being discovered, but they are no less important to our understanding of the world we inhabit. As such, they are deserving of serious study. We need to know how things work, yes, but we need to know how people work too, and societies, and how our own biases and perceptions might affect discoveries we make. Writers are essential this way too--fiction is just one great big thought experiment. Remember, it took an anthropologist to open the Stargate! (Yes, I did just conclude an a passionate defense of my chosen field with a reference to a '90s TV show. Daniel Jackson is too awesome to be affected by being fictional.)

Now, back to business.

I had a psych class in high school, so I was already familiar with a lot of the concepts we covered. It was nice to have that background: a lot of the time, I could devote more energy to the little exceptions and fascinating case studies because I already had a good grasp of the main themes.

The first third of the class was spent on biological processes, such as child development, very basic neuroanatomy, and optical illusions. It was pretty cool stuff and made me briefly consider studying the development of language and other forms of communication. That would be child development and cognitive psychology. But then we moved on into the next unit, social psychology: how social norms work, how gender is socialized, what makes people happy, and so on. This is perhaps the area that interests me most on a personal level--identity formation and social interactions are fascinating! Look up the Milgram experiments to see how strong the power of context is. It's scary: what we do is much more heavily determined by the situation than we'd like to believe. The final third of the class is about clinical psychology--learning, conditioning (classical and operant), and mental illnesses and their treatment. We're apparently very heavily affected by genetics, too, in practically every trait. It looks like, between what we're genetically predisposed to do and what social norms encourage us to do, individual will is more a product than an independent force. Cool, but in a shiver-inducing way.

The tests are based off the in-class lectures, but we have a lot of textbook reading to do too. There are weekly online quizzes, one per chapter of the textbook, that we take as we go along. They can be difficult sometimes, but I think they're mostly just to ensure that we do the reading. It's not a problem for me--I really enjoy it.

Taking Neuro and Psych concurrently is in many ways very useful. Often, Neuro will go into detail, explaining the mechanisms of brain plasticity (hint: calcium does everything) while the Psych class will just say "the synapses rewire themselves." That's very helpful. However, at times, when practically the same subject is being covered in both classes at the same time, it can be a little bit off. It doesn't help that I have both classes in the same room on the same day. For instance, last week, we were learning about conditioning in Psychology and I felt mildly impatient: Changes in behavior are related to changes in the brain, meaning conditioning causes some kind of learning via brain plasticity . . . didn't we already go over this? And in much more detail? Of course, we hadn't; that was in Neuro.

Neuro is a somewhat intense class. There's a lot to cover, and I know we're not going nearly as in-depth as we could. That's a good thing, because we couldn't handle learning exactly how everything works--that would be far too much information for one semester, at least in what's supposed to be an introductory course! We did get a lot done, though--neuroanatomy, cellular communication, neural growth, neurotransmitters, pathways in the nervous system, mental illnesses and lesions and synesthesia . . . . I hope I retain most of it!

Sometimes I have some trouble remembering things unless I know why they work the way they do, so I ask my friends who are majoring in the various natural sciences if they can explain things. This can lead to quite interesting tangents during which I learn things absolutely unrelated to the class. For instance, I was griping at lunch one day about how cellular anatomy was kind of boring because we were just learning it as a precursor to the interesting bits, rather than learning much of interest about the organelles themselves. One of my friends asked me for an example. I picked mitochondria at random and got a mini-lecture, complete with visual aids, about cellular energy (because mitochondria basically produce energy). I now know that we're not really sure where ATP (the stuff that creates energy in living cells) comes from. There's an ATP production cycle, but you need ATP to make more ATP.

This cannot be summarized. It's an experience in and of itself. I love reading other people's writing. I love having intelligent, insightful people give me advice on my writing. I love reading (published) short science fiction and fantasy stories and discussing what about them worked or didn't. I love that half the people in the room sigh or swoon or nod emphatically whenever I mention Neil Gaiman or Tamora Pierce or Ray Bradbury. I love giving and getting more book, movie, and TV show recommendations than any sane human being could manage in a summer. I love having conversations in which half-completed allusions (because it is not necessary to repeat the entire line, catchphrase, or analogy) are made to Firefly and Narnia and Lord of the Rings and jokes about The Wheel of Time and Star Trek and various anime shows I've never seen are tossed around as freely as . . . actually, I don't know any other group that references so many things so frequently and with such great delight. Maybe indie music fans.

But I digress. The ExCo is mainly about the atmosphere and the shared joy of writing, and it's what made me decide to live on SF Hall next year, but it's actually a well-structured class as well. We have a focus every week--early genre fiction, character development, worldbuilding, POV (point of view), structure, tropes, retellings, etc.--and an assignment every week related to that. Three people get their stories workshopped every week. It's a pretty work-intensive class, for an ExCo, but it's worth it.

Actually, this might not be just an Oberlin thing--I don't know. However, at the end the final class of the semester, the students applaud. I'm sure there are as many reasons for applause as there are students: liked the class, liked the prof, glad it's over, everyone else is doing it, want to see the professor get all awkward about being clapped for... But it's neat. I like it.

I wrote an entire blog post a while back about how my extracurriculars were affecting each other--Sunshine Scouts was making me look differently at my writing. Well, that interconnectedness is diffusing even farther now: I'm making up songs about Stargate: Universe with my/the (borrowed) guitar . (Whew, that was a lot of links!)

--gone to the Oberlin Taiko spring show: absolutely amazing. I was very impressed.

--had une petite fete in my final French class, for which I made brownies. This required sanitizing Barnard's travesty of a kitchen that no one ever cleans. But I made the brownies, and they have chocolate chips and walnuts in them, and they are delicious. Life is good.

--found a little playground I didn't know existed and swung on the swings.

--cuddled kittens at the Ginko Gallery. Ma'ayan wrote about how that works here. Right now there's a really, really tiny one that must have been premature or something. She's all fuzzy, but her eyes have apparently just opened. She's in an incubator. There are two other smallish ones and then three bigger ones. Even the big ones can't weigh a pound, though--I wouldn't have known one was trying to climb up my back except that his little claws got snagged in my shirt. Anyway, cute cute cute.

--had my birthday. My friend Emma, who you first met in my Halloween post as the knitting superhero, continues her knitting awesomeness. She found out Friday afternoon that my birthday was Sunday and, between then and Sunday evening, she knitted me a spaceship. (Serenity, to be precise--the ship from Firefly.) 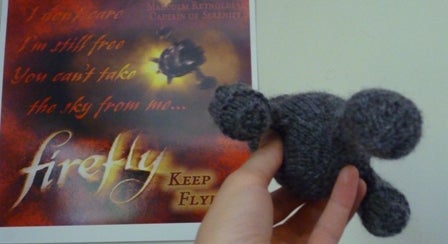 (above) Emma's Serenity held next to a picture of it on my poster. See? 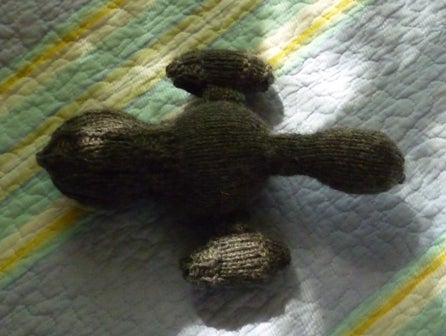 Parked on my bed. When's the last time you saw a cuddly spaceship?