If you looked at prospie Ben's "what I'm most apprehensive about for college" list, you would likely see such typical worries as:

Being paired with a poorly matched roommate is a prospect that haunts pretty much any incoming freshman's worst nightmares. But on July 1, 2012, my worry was expunged when I received my roommate assignment. In a Facebook message dated precisely three minutes after we received e-mail notification of our housing information, my roommate cheerily introduced himself.

After 33 multi-paragraph Facebook messages* back and forth over the course of the summer, we knew a considerable amount about each other--at least, enough so that we could both know what to expect before we set foot on campus. He's into theater, I like writing; his favorite author is Hemingway, mine is Steinbeck; he's from Maryland, I'm from Boston; we both hate country music, and we both love our dogs.

Perhaps Ian's most "roommate-of-the-year" worthy moment came when I first met him--on the morning of the first day of orientation. You see, orientation began on August 28 this year--my 18th birthday. I had mentioned this to him in a Facebook message weeks before, but I hardly expected him to remember. We finally met in person during breakfast at the motel we coincidentally both stayed at. As I nibbled at my continental breakfast, he approached my family's table, shook my hand, handed me a blue box with a red bow, and said, "Hi! Nice to finally meet you in person! Happy birthday!" After about thirty seconds of hand shaking (our parents wanted to meet each other too), he left with his mom and dad, and I returned to eating my now hopelessly soggy Raisin Bran.

I was amazed that he would even think of getting me a birthday present. I assumed that, at most, it would be a whimsical trinket from the dollar store, or something we could put on our wall. I would have been happy even if it was. But, no; Ian doesn't roll like that. Inside that box were two volumes of Steinbeck's complete works, as I had mentioned over Facebook that he was my favorite author, and a personalized card (pictured below): 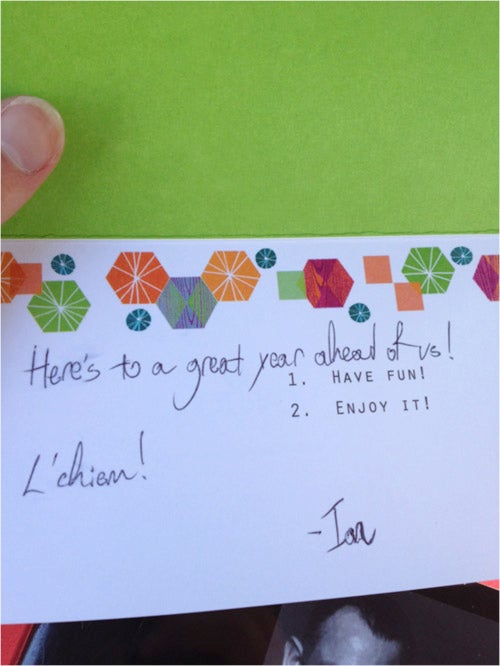 As some of you may have guessed, we're both also Jewish: that explains why he wrote "L'chiem!" (Hebrew for "To life!").

Ma'ayan's response to a Facebook post, when all of the Obie 2016 class was FREAKING OUT about when we would receive roommate assignments.

Sometimes I wonder how much thought could have gone into the roommate pairings at big universities with 25,000 students, when some of my friends who attend large schools received their housing information a mere two weeks after matriculating. I am proud to say that I heard my housing assignment after all of my friends did, even though I go to a smaller school.

Though it was difficult to empathize with the ResEd office in early June when I waited impatiently for the all-important housing email, I now realize that this long waiting period is not because everyone in the ResEd department decided to take an impromptu month-long nap. It takes them so long because they care about your residential experience, and put in the time and effort into ensuring that they make the best possible roommate pairings.

Now I know we can't all be lucky enough to have a roommate whose biggest flaw is being a Yankees fan, but you can trust that the Oberlin ResEd department puts in a LOT of time to make sure that you and your roommate are a good match.

*By the way, I know lots of freshmen that communicated extensively with their roommate before school started, but many certainly don't--and that's fine too! Whatever floats you and your roommate's boat.

This post is adorable, Ben! Next you'll have to write about all of dascomb 3rd floor.

CARA! Want to hear something funny? I almost wrote about that! As you can see, I chose Ian instead. But I will definitely write about the third floor in the future!

1) The fact that you put your dog as an interest is perfect.
2) Roomie love is the best kind of love, and you and Ian are the bomb.

Slightly disappointed in the lack of Charles shout-outs.

This made my heart so warm and fuzzy:)

@Zoe and Siena: Thanks!! You're both awesome.

@Mimi: I give her a big shout out in the bio in my blogger profile (should be posted tomorrow). Just you wait! She's also in my banner and list of interests so I'd say she's doing pretty well for herself!

What an awesome bday present! Can't say I've read Steinbeck but I love getting books for my bday. Sounds like an awesome roomie and great first post!!

This is the cutest! My roomie and I were wearing shirts the same shade of coral when we met. We're in our second year cohabitating now :)