A question that a lot of friends ask me is if I have any preference in what events or groups that I make posters for. There's obviously a lot of different factors that go into my decision to poster-making. Money is a great incentive to do anything and admittedly plays a great deal into what I choose to print. If I have a certain affinity towards an event or the person asking for posters, that also tilts the scale in their favor. But when it comes down to it, the design aspect is the most important factor when deciding what posters to make.

I find poster-making to be so much fun that it's a problem. Oftentimes I find myself spending much more time on the design of a poster than on reading my textbooks. So when I agree to print a poster for an organization, I have to realize that I am going to be slaving over its design because, well, that's how I work. The worst thing that can happen is to get stuck on the design part of a poster because the material that you're working with is either too boring or too constricting. Having guidelines when creating art is oftentimes nice. It can be hard to stick to a single idea, or even coming up with one in the first place. But other times the themes of an event are so constricting that it makes the poster process more chore-like than other jobs. As an artist, I enjoy the jobs that allow for a great deal of freedom in their composition.

It is this sole reason that I seek out posters for bands and musical artists coming to Oberlin. Rather than having to incorporate specific imagery pertaining to an event, band posters simply have to represent the mood of the band: Happiness; quirkiness; brashness; fearlessness (haaaa!).

I often save my most cool and creative designs for these sorts of opportunities. When I heard that Guided by Voices was coming to Oberlin College (on Halloween of all days!), my first thought went something like this:

I NEED TO MAKE THOSE POSTERS. I NEED TO FIND THE PERSON THAT IS IN CHARGE OF DECIDING WHO GETS TO MAKE THEM AND BEG THEM FOR THE RIGHTS. NOW!

I sought out Justin Harris, the teacher's assistant for the silkscreening class this semester, who both makes a lot of the posters on campus and works the sound equipment for many of the shows at The 'Sco (Side note: I envy that combination. Not only does he get to know what bands are coming to Oberlin, he usually has first dibs on the poster). After sharing an agreement of interest in making posters for Guided by Voices, we were able to contact the people necessary to get the rights to making the poster. I took charge of the designing of the poster, Justin agreed to handle the physical printing. I hate to sound cocky, but they turned out fantastic. 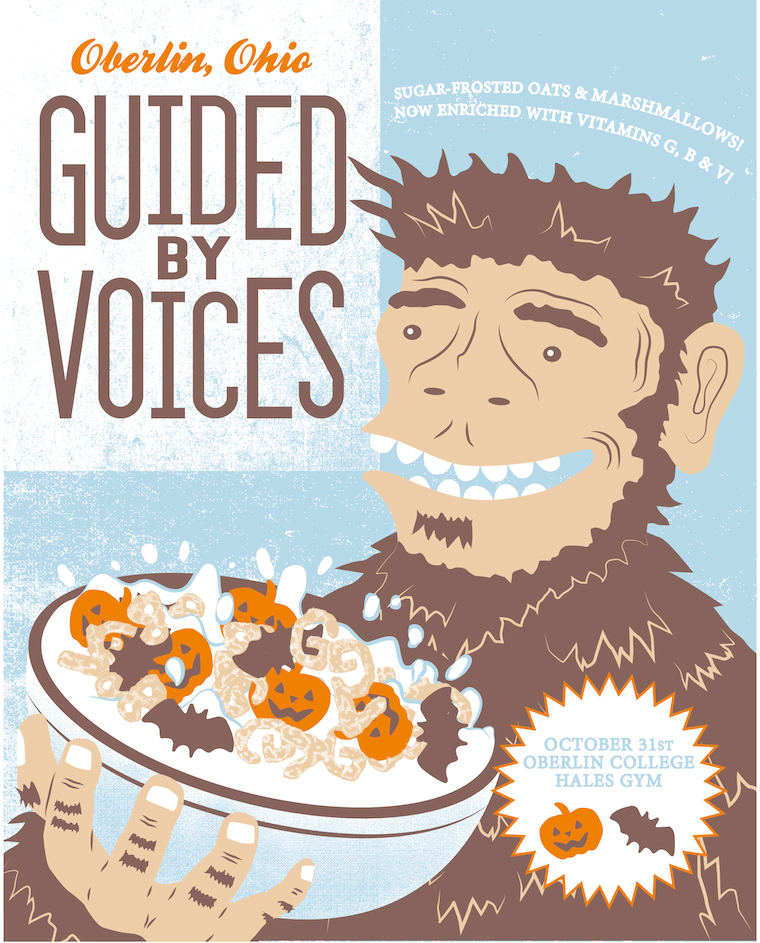 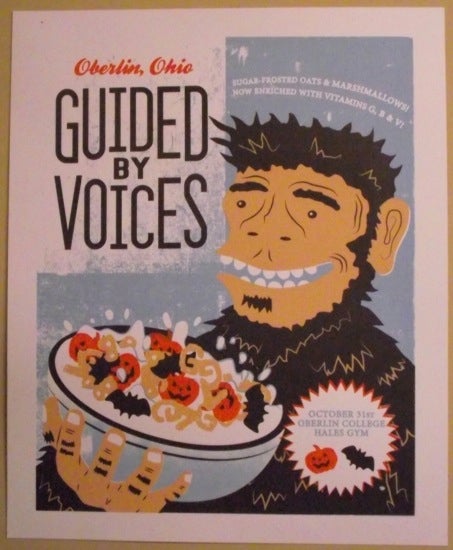 In addition to print-making, cereal is also a big passion of mine. Gotta love me some Cap'n Crunch and Cinnamon Toast Crunch to burn cavities through my molars.

If you haven't seen the poster around campus, there's a reason for that: not only was this poster unique in that we got to print for one of the most influential 90s indie rock bands, we were contracted by the band to print, sign, number and sell the posters at our own booth at the show. Here's a rather official looking email to emphasize the official-ness of this poster job:

- Guided by Voices has the right to commission local artists to design and print their posters.
- A limited number of 100 posters are to be numbered and signed by the artists.
- 20 copies are to be presented to the band before sound check.
- 5 copies must go to the venue.
- A digital copy or hard copy of the print must be sent to the management agency 1 week prior to the show.
- The artists may keep the remaining copies to sell as they please. 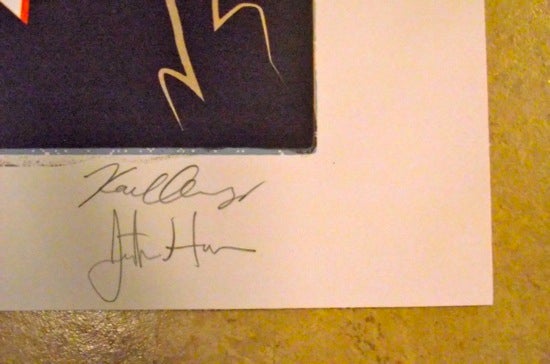 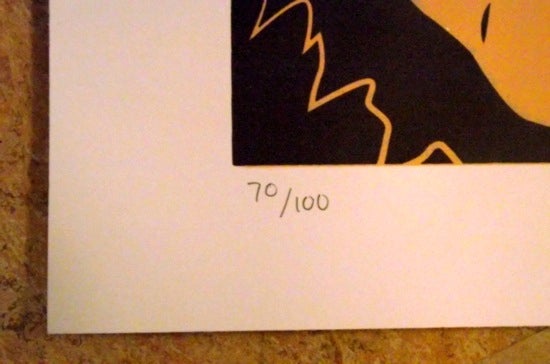 Yeah, it was a big deal. Since getting into print-making, one of my major goals has been to be the one responsible for making posters I see at many of the shows that I go to. And, well, it happened!

Dreams do come true! It may seem like a fairly modest dream, but it's a dream nonetheless. Upon presenting the band with a stack of 20 posters, their reaction was, "Cool. GBV cereal." I'm taking that down as a compliment in my book.

We sold the posters at the venue for $15 a pop. Of the 75 that we were allowed to sell, we sold about 45 of them. A pretty good payday if I do say so myself. The rest will be put up on the internet for sale in the near future.

Oh! And by the way, Guided by Voices put on a great show. They played nearly everything from Bee Thousand, which is always a good thing. The lead singer Robert Pollard also had a rather funny go-to dance move in which he swung his leg upwards so it was nearly perpendicular to the ground. At age 53, I thought it was rather impressive. One annoying thing about the night was that the fire warden put a cap on the occupancy of Hales Gymnasium at 600 (as opposed to its actual occupancy of 1000). It would have been nice to see Hales packed, but it's a little too late to complain about that now.

Case in point, band posters are awesome. I've torn through dozens of books documenting band posters through the years and spend hours upon hours sifting through GigPosters for inspiration. But don't think I'm planning on stopping here. Opportunity willing, I still look to someday be invited to FlatStock, which is a poster exhibition held yearly by the American Poster Institute. It invites many of the prominent designers in the poster-making community. Crossing my fingers for the future!

For the sake of making this blog post look longer and to showcase some wonderful art, here's lots of posters from some of my favorite designers (bands too!). Enjoy! 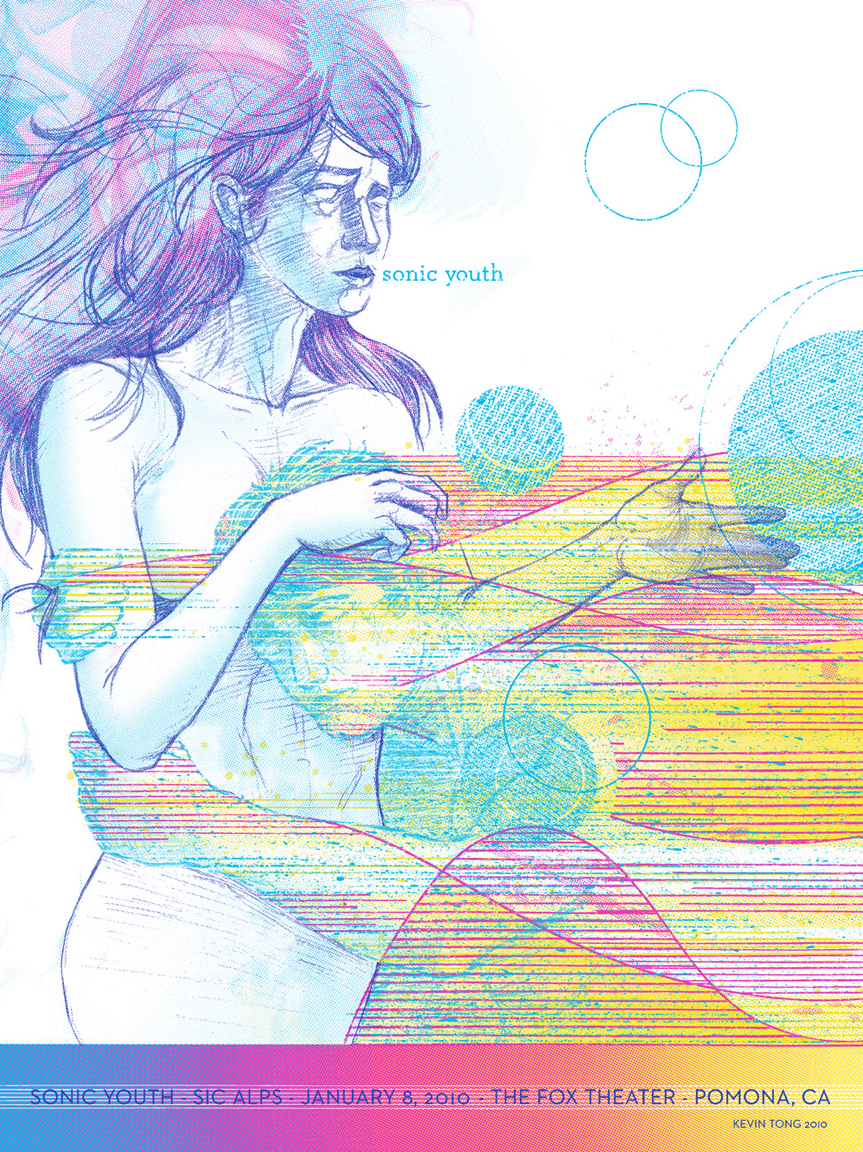 UPDATE:
Guided by Voices posters are now on sale! Click on the "Store" link on my website and hit "Purchase" underneath the GBV poster. Posters are being sold for $20 (plus shipping and handling).

Hi, I'm the bunny from Disarm the Settlers (one of the two major GBV fan hangouts). I was at the Oberlin show, sorry I was not able to see/ buy your poster there but I was in a chicken suit and having enough hassle just holding onto my bucket.

If you'd like to advise where online you're going to be selling your poster (gigposters.com ? or somewhere else?) some fans might be interested. The quality of the posters on this tour has, shall we say, "varied". Yours is pretty dern good.

@bunny (and everyone else too!)
Guided by Voices posters are now on sale! Click on the "Store" link on my website and hit "Purchase" underneath the GBV poster. Posters are being sold for $20 (plus shipping and handling). It'll also be up on GigPosters very shortly!