Hey readers! You should definitely check out this post before reading the following one or nothing that you'll read after this sentence will make nearly as much sense. Is Ang my imaginary friend? Where is this mysterious place called Gallaudet? You can find out by reading that post first! Besides, it's a great post, and this one will still be waiting for you when you return.

On Tuesday, April 25th, 2017, I lay perfectly still for about forty-five minutes as someone used tiny needles to insert ink into the bottom layer of my skin. In other words, I got my first tattoo.

One of the best parts about being at Gallaudet this semester has been the fact that my best friend Ang (they/them/theirs) has been here with me. They randomly got an internship in DC this semester. They didn't even remember that I was going to DC when they told me they got the job. I was so happy when I found out that I had to do jumping jacks to keep from screaming and disturbing the peace in my room in Oberlin's designated quiet dorm.

Ang came over to my new dorm my second day at Gallaudet. The two of us sat on my new bed and chatted about everything we wanted to do throughout the semester. After listing almost every museum, something dawned on me.

"You know, we could get that tattoo we've been talking about."

The moment I found out about Ang's crash (which you should have read about in that other blog post I told you to read first), I decided that I was going to get a tattoo either in memory of or with them. Luckily, when I asked them a few months later about the idea, they agreed instantly. We decided that we wanted to combine each of our favorite things: wheelchairs and bikes. After months of sending doodles back and forth, we ended up with a wheelchair wheel and a bike wheel that overlapped.

In the middle of March, Ang and I found ourselves once again sitting on my bed in my Gallaudet dorm room. We had spent the week discussing which tattoo artist we liked the most. We wanted someone who specialized in black and white work located in a well-reviewed shop. We both fell in love with a picture of a black and white tattoo that featured a panda with its face reflected in a pool of water. We called the shop that day and made our consultation appointment for the next month.

The day of our consultation I felt as if I were having a very strange dream. One moment I was lost wandering around Georgetown and the next I was handing someone my credit card and agreeing to come in a week later to have someone draw permanently onto my forearm. Ang was worried that we hadn't given the artist enough to go on, but I wasn't the least bit concerned. I viewed her as an artist. If you were to pay me to write your lover a poem, I would want to know a fair bit about them, but I wouldn't want you to dictate each line break. I presumed that the tattoo artist would do a much better job if I granted her the artistic freedom I would want someone to give to me.

I spent the next week altering between panic and excitement. I wasn't worried about the specific tattoo itself, but rather about getting any tattoo ever at all. How badly would it hurt? What if I moved accidentally and ruined it? What if I fainted or something? What if I ended up hating it? But then I would think about how I felt when I thought of Ang and the fact that I had wanted this for a very long time. Two nights before the appointment, I interviewed Ang for a project for my Multicultural Psychology class. (They are a first-generation immigrant from Hungary.) Having a two-hour-long conversation about our childhoods and how much we meant to each other in high school finalized my decision even more than paying the tattoo deposit had.

Unless Ang and I happen to die at exactly the same moment, one of us will eventually have to live without the other. As individuals, we are anything but permanent. Our friendship is a different story. Even as the two of us grow up and live in different places, fall in love with different people, and build different careers, the love and compassion we've showed each other will leave a permanent mark on our lives. We chose to make that mark visible.

Despite my fears, physically getting the tattoo was a really fun process. Don't get me wrong, before lying down on that table, I was terrified. Heart pounding, light-headed, borderline full-on panic attack petrified. I was so nervous that the artist took the time to say, "Lie as still as you possibly can. I'll be holding your arm down, so that won't move, but the rest of you shouldn't move either. Lots of people squirm around, which makes doing a good tattoo really difficult."

But the moment the pain began, I calmed down. There were moments when the artist had to linger on a particular spot. Those few minutes hurt so badly that I mouthed words that my boss won't let me use in a blog post. Yet, when I wasn't in agony, I enjoyed the pain. It was a vibration combined with a sting that I for some reason I found soothing even though it physically didn't feel good. I just lay perfectly still with Ang's hand on my other arm. I lay so still in fact that the artist said I was one of the calmest customers she had ever had. (For the record, Ang didn't find the process the slightest bit pleasant and resorted to biting a bike inner tube they were wearing as a bow tie.)

Afterwards, the two of us thanked the artist a bazillion times and went up the street for pizza and ice cream in celebration. It was a really good day.

Now that I have the tattoo I can say that I love it! Well, I'm going to love it in a few weeks. At the moment, I sort of hate it. It aches and my forearm is all swollen and you have to keep disinfecting it and I can't work out and it's just annoying. But it looks super cool! It's a beautiful addition to a body I'm slowly falling in love with. 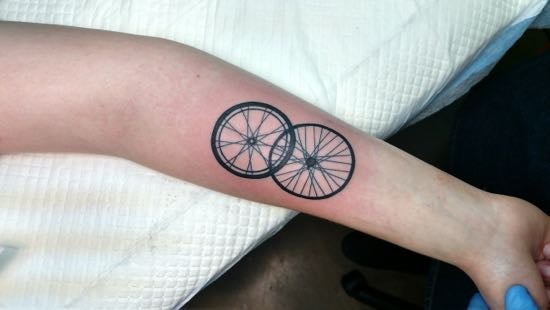 (Taken by my amazing tattoo artist moments after the tattoo was finished.)

Even though this is the first time I've been inked, it doesn't feel like my first tattoo. I have thirteen visible surgical scars (and a bunch inside my throat that you can't see but I certainly can't forget) from five different operations. Although scars and tattoos may seem completely unrelated, to me, they're pretty much the same thing. They are permanent marks on my body that tell a story. They tell a story of physical pain, medical advances, and (sometimes) ableism. I am perfectly fine with that being part of my story, but I don't want it to be the only thing people see when they look at my skin. The joy and love and laughter that accompany my friendship with Ang is something I want to be far more obvious than that pain.

The best part of being an adult is that I can make decisions about my body, and I'm going to have to. In the next few years, I have to decide whether or not to get braces to fix my overbite, whether or not to get my deviated septum repaired, and whether to go on testosterone. All of those decisions are completely permanent and far more significant than a tattoo. With the knowledge of a liberal arts education and the support of all of my friends at Oberlin, I feel more qualified than ever to make those decisions. Getting a tattoo was a way of marking my body as my own. No doctor can ever operate on me again without my permission. My body doesn't belong to the medical establishment anymore.

Now, you may disapprove of my decision. You may say that tattoos are unnatural or just a fad or that I'm going to regret it in twenty years. And maybe you're right. Maybe I'll turn forty and think "Why was I ever stupid enough to do that?" Or maybe you're wrong. Maybe I'll turn seventy and think "I am so glad I'll never be able to forget what true friendship feels like." I have no idea. I cannot predict what Future El will feel because I haven't met Future El.

I spent my high school career completely ignoring the needs of then Present El and getting near-perfect grades in the hope of making Future El very happy. Now that I am that Future El, I wish Past El had realized that Future El would want many more happy high school memories to look back on. Sure, I always want to give Future El all of the tools they need for a good future. I'm going to graduate college, build strong relationships, and hopefully not do anything downright foolish, unhealthy, or dangerous. But there's no point in obsessing over what Future El would want because I have no idea what they will want. When it comes to most things, Present El's needs and desires are by far the most important ones. The best thing I can do for Future El is to make sure that Present El is happy and healthy.

The day of Ang's crash wasn't the first time I considered getting a tattoo with them. The idea had bounced around in my head a few years earlier after I saw photos on Instagram of best friends getting matching tattoos. But I dismissed the idea. It wasn't worth the money/time/pain. Besides, we could always do it after college. When I received that dreaded text from my mom saying that Ang had been hit, I deeply regretted that line of thinking.

Regardless, I probably only have to live with the tattoo until the end of the semester. My mom is going to kill me as soon as I get home.