A little bit of backstory: once upon a time, my family moved to Hawaii. In my transition from mainland to island, much of my academic drive was lost and I ended up gravitating to a different sort of immersive learning structure. I found a mentor in the food service program at my high school and began competitively cooking.

I won't get into all the details of all the things that I created with food and for whom I prepared them while I was in high school since that's a whole blog post in itself, but I ended up in a lot of totally sweet food scenarios that a high school student — or even a culinary school student or graduate — would never have the opportunity to experience. One of the contests I entered was the Kona Coffee Competition, an annual recipe competition held in early November as part of the Kona Coffee Festival. It was rumored that Food Network was going to be present to tape the competition, judging, and winners for future airing on one of their American Food Festivals shows. COOL, I thought, as I continued to experiment with the perfect balance of sweet, salty, and savory in my Kona coffee risotto. I wondered if it would be a Food Network dish.

Well, long story short, it wasn't, but that was because Food Network didn't show up. I did end up winning first prize in the entree division for culinary students, a division for high school and secondary culinary school students, for a Kona coffee and coconut risotto stuffed into a roasted kabocha squash, topped with soy-toasted macadamia nuts and seared ahi. You can drool. It's okay. (It only gets worse from here, though. You should probably grab a towel for the rest of this post.)

So that is how I got within an arm's reach of Food Network. Until Thursday. On Thursday, my degree of separation became one, because my friend Nathaniel Mich '10 was on an episode of Sweet Genius.

Here are some excellent things to know about Nathaniel that you would never know from watching him on TV:

¥ Nathaniel graduated from Oberlin in 2010 with a triple major in archaeology, anthropology, and geology. (Way to rep the '10ers!)

¥ Nathaniel was a gracious volunteer during our first date auction. As an auctionee, he went up on stage, stated that he would make a dessert for the winning bidder, and he promptly sold for the highest amount of money donated that evening. 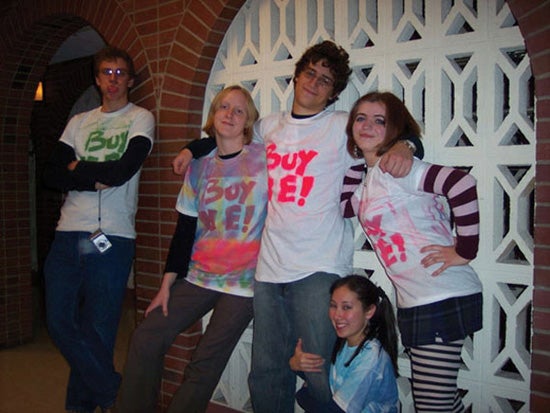 ¥ Nathaniel is a fantastic violinist. I was privy to many a jam (not the sweet kind; I only found out about his cooking awesomeness later) session in South during my first year. 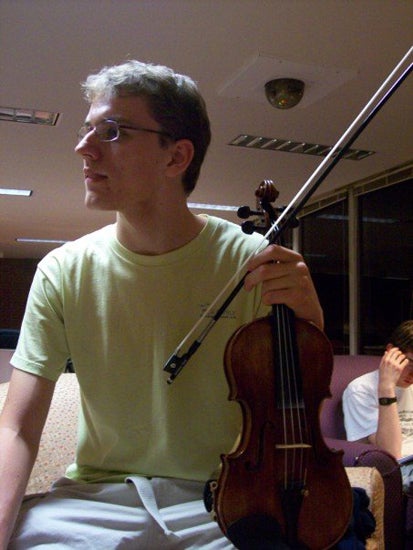 ¥ Nathaniel can and will kick your butt at Scrabble. 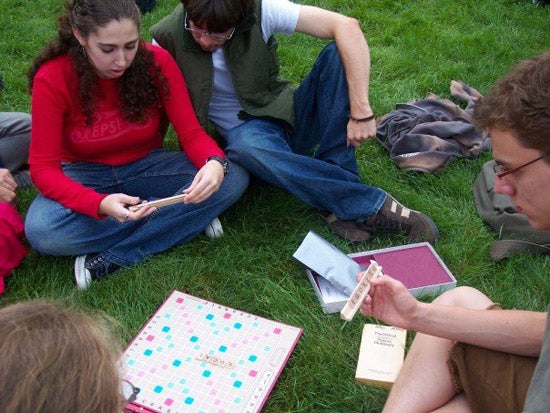 ¥ Nathaniel was a lauded cook in Pyle Inn Co-op, where he made many an amazing meal (many of which I had the absolute pleasure of eating when I was unofficially splitting into Pyle). He and a crew of 5 other folks made one of the most stunning special meals EVER, the chocolate special meal, which included a triple layer cake that was so huge it barely fit on a table. There was also chocolate chili, a salad with cocoa vinaigrette, chocolate bread pudding... and more. I can't even remember any more because I was in an absolute chocolate coma after the meal. 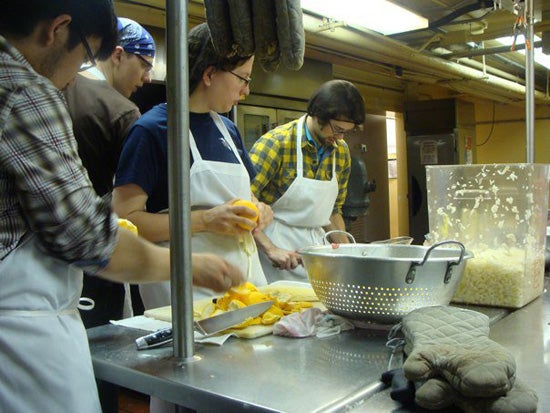 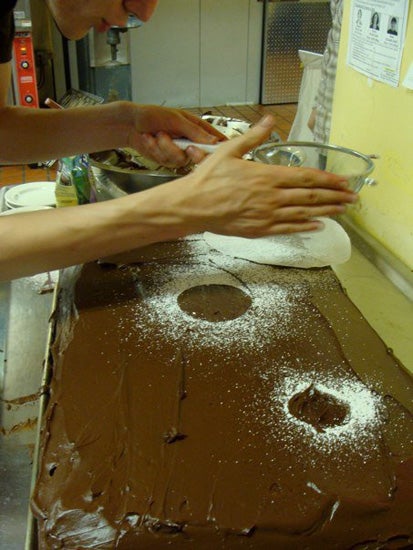 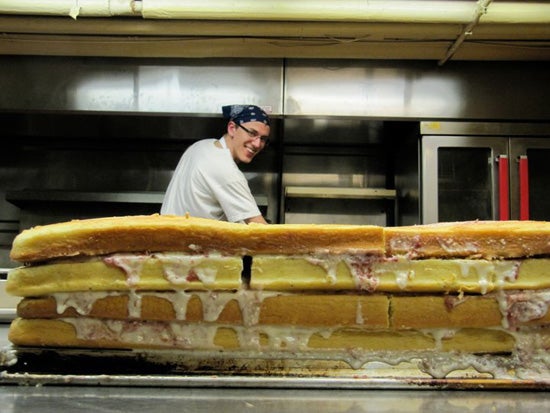 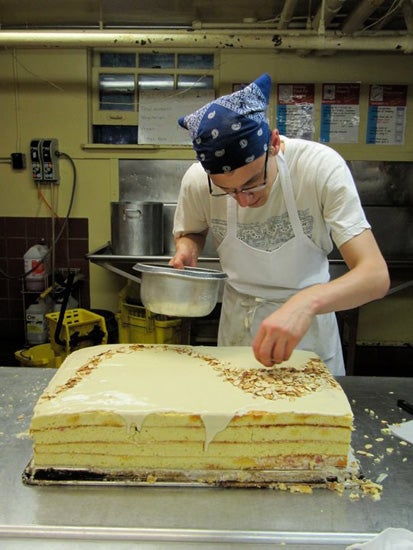 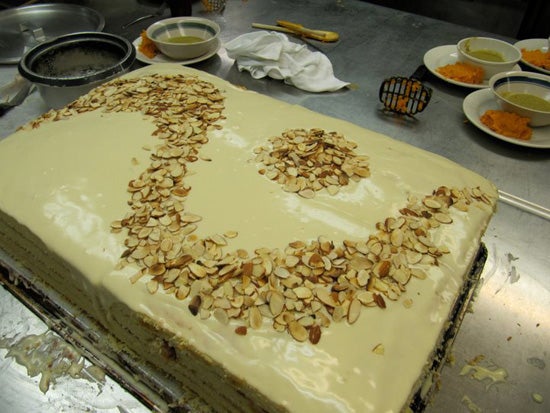 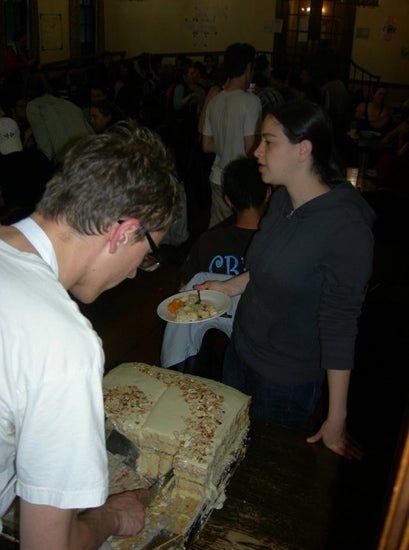 The final meal Nathaniel prepared in Pyle involved this cake. Sadly, I didn't get to sample it, but man, does it look good! Photos courtesy of Nathaniel, except the last one, which was taken by Anna '10.

These cakes got several votes for "favorite Nathaniel dish" on Facebook, too.


¥ Before he began co-oping, Nathaniel was the Shabbat tasty things maker for Kosher-Halal Co-op, and practically every Thursday evening he would talk about all the ingredients that were coming into KHC so he could make delectable desserts. It was in those moments that I secretly wished that Harkness and Kosher melded together during the weekend.

¥ Nathaniel is the head chocolatier at Hedonist Chocolates in Rochester, New York (well, I guess you could have learned that detail from Food Network). Sometimes (a lot of the time) he posts photos of his chocolates on Facebook and they are SO DELICIOUS LOOKING.

¥ Nathaniel has an incessant urge to teach while he creates. If you watch the episode of Sweet Genius, you'll see that he's always talking when new things happen, and it's a testament to his deep-seated interest in food and sharing that love with others. He even co-taught the Chocolate ExCo his senior year, a class that I so wish I had had the opportunity to take.

¥ Nathaniel and my friend Miriam had a carrot cake bakeoff on my birthday senior year. I was not present for the bakeoff, but the leftovers of the cakes ended up at my party. Best. Party. Ever. 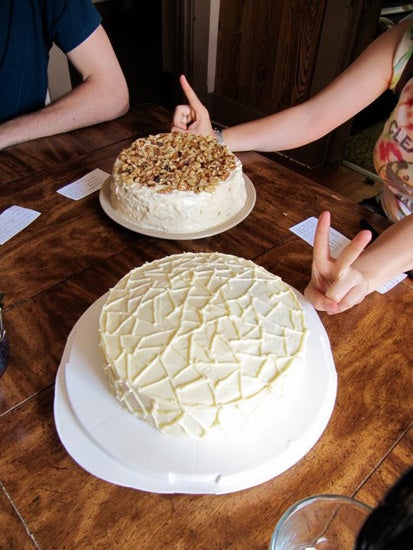 Who won the bakeoff? You know, I don't actually know who won, but here's the thing: we all won. Because cake is winning. Photo courtesy of Nathaniel. 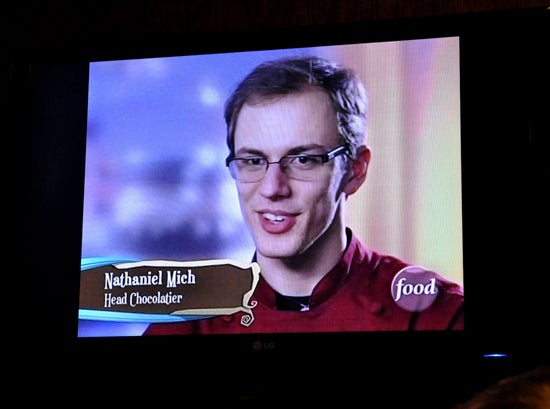 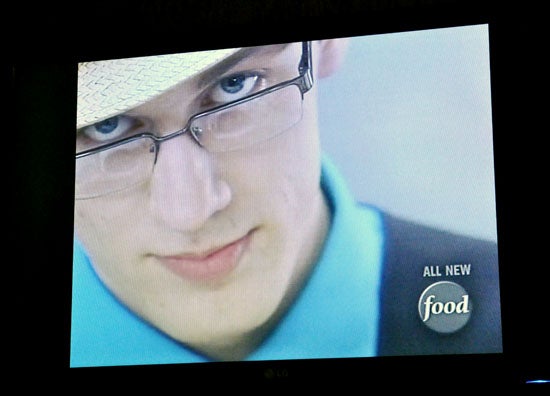 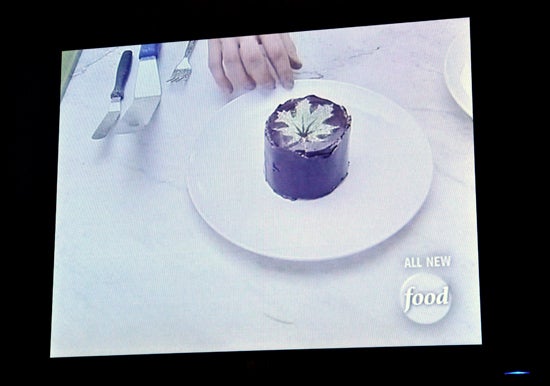 Montage of Nathaniel from his intro on Food Network. Sidenote: OH MY GOD MY FRIEND IS ON FOOD NETWORK.

To prepare for the big day, Tim and I made some desserts, inspired by Nathaniel and based upon some of his recipes, to indulge ourselves while watching our dear pal on TV. There were rosemary-cardamom chocolate brownies with a rosemary cream cheese frosting and basil chocolate truffles. While the brownies were quite good, the truffles were simply fantastic. I don't like sweet things and I ate four. Oops.

There were 15 of us piled into the TV lounge in Asia House, and though we swore we wouldn't yell and cheer every time Nathaniel ended up on screen, we did it anyways. How often do you get to see one of your friends on national primetime TV?! Each time he came on the screen — which, by the way, was a lot! The camera loves him! — we cheered. Or reminisced about the good old days when Nathaniel was cooking with us, two floors below the lounge, in the Pyle kitchen. Or talked about how delicious his food looked on TV, lamenting that it wasn't in the room with us, along with Nathaniel himself. 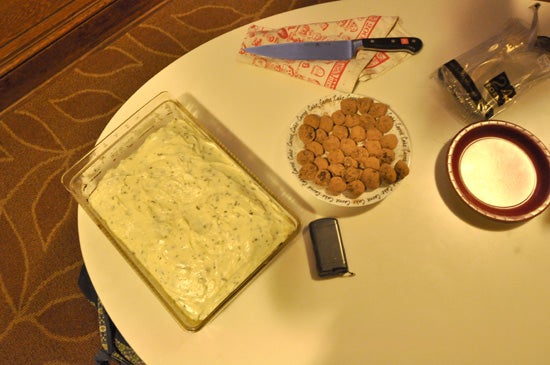 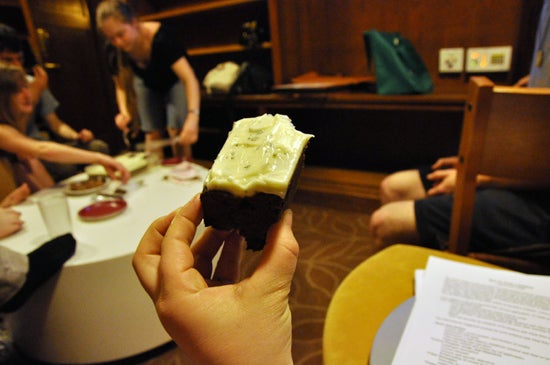 Of course we had to have treats. We're watching Nathaniel on Sweet Genius! 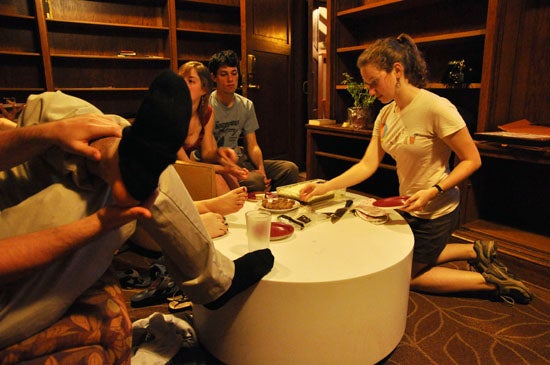 We used the commercial breaks to indulge on our aromatic desserts.

The suspense is killing you, isn't it? Here are the dishes:

For the first round (the chocolate round!), the secret ingredient was fortune cookies, then blue cheese was added. The inspiration was a ballerina. Sadly, I didn't get a photo because I was too busy eating soft and melty basil truffles. The blue cheese-pear-chocolate mousse that Nathaniel made looked dense and flavorful, and it was topped with a crunchy looking caramel, too.

For the second round (the candy round!), the secret ingredient was artichokes (to which I burst out laughing, since I had just eaten an artichoke for dinner), and the second was kaffir lime. The inspiration was a jack-in-the-box, so Nathaniel created a trio of "surprises" with dates, kaffir lime stuffed with chocolate mousse, and an artichoke candy. This round was particularly fascinating to me, because it incorporated very savory items into arguably the sweetest portion of the competition. Artichokes are a difficult but amazing ingredient, and I don't know that I would have figured out what to do with them in a sweet scenario, especially under that sort of pressure.

Kaffir lime, on the other hand, is one of my favorite ingredients and one that I miss desperately when I'm in Oberlin. My parents have a kaffir lime tree and I've been known to snip leaves off of it (amazing in curries, by the way) to keep in my pocket and sniff periodically throughout the day. It's a very pure but sweet citrus smell, heavy on the aromatic but less so on the oils that come with most citrus fruits. Generally, the lime itself is relatively dry but the zest and leaves lend an exemplary flavor to sweet and savory dishes both. 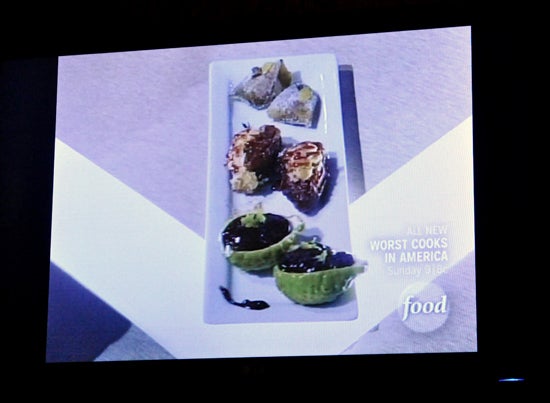 The final round was the cake round, which was when the folks watching with me in Asia House affirmed: "Nathaniel is going to rock this." The secret ingredient was orange soda, the second ingredient was pretzel rods, and the inspiration was bubbles. Nathaniel created a trio of dishes, a spiced carrot cake with an orange goat cheese frosting, an orange and mustard relish with pearl tapioca, and a pretzel pudding. The cake was deemed the "essence of summer," and the pretzel pudding astonished everyone (the judge and Nathaniel included) but in the end, Nathaniel's opponent bested him. But as I texted to my friend Anna after the show was over, "You realize that we all won in this situation, right? Because while everyone on TV thought his dishes looked amazing, we can say, first-hand, that his food is legitimately tasty." 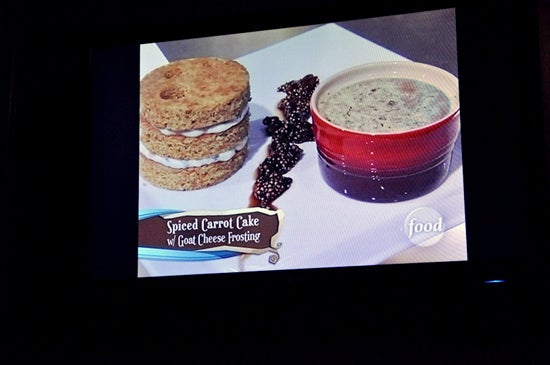 Oh, we collectively called Nathaniel right after the show aired to tell him that he was our sweet genius. Aw. Oberlin love.

While I'm still on quite the sugar high from watching an Obie on the ultimate food channel, I feel like it's worth saying that out of all the chefs on the show, Nathaniel was unique. Much of his cooking experience was tested time and time again through his years in OSCA and summers interning at the chocolate shop at which he currently works. When it comes to mysterious and secret ingredients, an OSCA-trained cook will have no fears. If you have weird ingredients, you will figure something out, quickly and for a hundred people. It's not classical training, but if anything can prepare you for fast, creative, and tasty cooking in the real world, OSCA is it.

I can still dream that I'll one day end up on Food Network, but for now, I am perfectly happy that a fellow foodie, a fellow OSCAn, and a fellow Obie has been there, done that, and got the fame and adoration that comes along with it. Hearts, kisses, and chocolate truffles, Nathaniel. Congratulations, and we hope to see you on TV again soon!

Did you watch Nathaniel on Sweet Genius? Share your thoughts in the comments below.

The Carrot Cake bakeoff was wonderful. Nathaniel won by three points (or was it two?) and we decided that was not statistically significant (out of 250, i think) so we called it a tie. Indeed, everyone won!

Now I almost feel embarrassed to have pitted my meager skills against someone so talented!

@Miriam - Dude, to have placed that closely to Nathaniel in a bakeoff means that it might have been you in those finals last night!! Also how good did that carrot cake look last night? SO GOOD.

Awesome! My stomach is grumbling. Nathaniel's food is amazing. I'm glad we overlapped at Oberlin, although briefly.

I fell in love with Nathaniel's dancing last spring and didn't realize it was the same Nathaniel until I got to Rochester and thought about Hedonist. And then of course I had to visit it. Oh my god the goat cheese whiskey fig ice cream he makes. Oh my god.