Today marks the end of my first quarter here at Oberlin, and with that, my yoga class. Yoga is a spectacularly popular class here at Oberlin, I mean, really. Who wouldn't want to get credit for this: 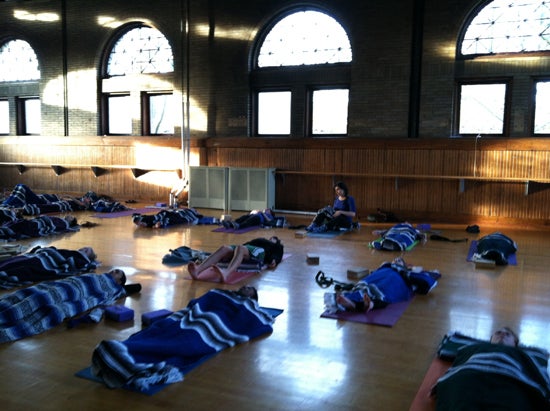 My fellow classmates at the end of class.

As a first-year, it was pure luck that I got into a yoga class. What actually happened is that a couple days into the semester, as I was scouring PRESTO (the somewhat torturous website we Obies use to register for classes), I saw an opening in the class. This was a Monday at about 3:50pm. By 4:30pm that same day, I had called the instructor, gotten his consent to register (something that is required for some classes here), bought the required yoga supplies, changed into stretchy clothing and run to Warner Gym on time for class.

Being one of the only underclassmen in the class didn't make much of a difference, as is usually the case at Oberlin. Whether you're a first-year or a fifth-year or a recent college grad that has somehow managed to continue hanging around Oberlin, everyone here is treated as an equal.

So there I was, happy to be a part of such a legendary class. The teacher, Eric, was great. Such a funny and intelligent man, and quite the stereotypical yogi as well (except during a few momentary lapses when he cursed in class, which was absolutely hilarious). The class itself moved a little slowly for my taste, but I think I learned more than I otherwise would have because of it. Yoga is more than just a form of exercise--it's also a form of meditation, body realignment, and mind control. MIND CONTROL?! No, not mind control, as in being in other people's minds. Mind control as in being in control of your own.

Eric often had us sit perfectly still at the beginning of class for about ten to twenty minutes. Have you ever tried to do that? It's really really hard. Especially when you're not supposed to be thinking about anything, that's even harder. Nevertheless, I'm a big advocate of meditation as an important life skill, and as most things go, the only way to become proficient at something is to practice. And practice we did.

Every week, I devoted almost five hours to myself and to my yoga class. Comparatively, I spent only half of that time in each of my other classes per week. At times it was difficult to focus and I had to constantly quell my mind's inner dialogue, which usually sounded something like, oh god I have chemistry lab tomorrow and still have no idea what is going on and I'm head cooking in two days what am I going to make? I wonder if the peanuts I ordered have come in and oh my gosh I nearly forgot I have to go pick up my package that is in the mail room and I'm so tired right now why have I not been getting more sleep and...

At other times, though, my mind was completely tranquil. Being in that place (mentally, I mean) is awesome. Right now, my life is a hectic, ever-changing, completely up-in-the-air jumble of classes, friends, work, family, and weather. My first few months at Oberlin have left me happy, amazed, confused, and totally exhausted. It is entirely possible that the only thing that has kept me sane through it all has been those five weekly hours devoted to yoga.

Right now, as I sit at my desk, my backpack packed for Fall Break and an adventure of another kind looming overhead, I can't help but feel bittersweet about leaving Oberlin, even for only a week. These past two months have undoubtedly been the most mind-altering (in a completely drug-free way) and expansive months of my life, and I don't want them to end.

The tree outside my window is covered in orangey-brown leaves. I hope that they are all still there when I return next week, but I know they won't be. Some will have fallen to the ground, and there is nothing that can be done to change the course of nature.

Hello! I know that this post was written almost a year ago, but I stumbled upon it while looking through student life blog entries to figure out if yoga at oberlin would be a legitimate thing (because I was about to cry if it weren't). But I thought that finding a blog post titled 'Obie Yogi' just goes to show how wonderful of a fit Oberlin is going to be for me, and I'm excited. :) So thank you for writing this! Hooray. I will most likely meet you and see you around next year. Peace!

Oh Andrea you have no idea how happy your comment makes me! I am actually doing a yoga teacher training this summer so that I can rightfully teach my own yoga class this year! There is indeed currently yoga in Oberlin, but in my opinion not enough fast paced, really sweaty yoga. Anyways my class is going to be twice a week in South Studios (and completely free!)...look for posters around campus in September! :)