Let me remind you that I am not hired to sell Oberlin to you. I am hired to tell you about my experience here. There is a dark side to Oberlin. It goes by the name of Obie Talk.

Obie Talk is a widely known about, online, anonymous forum, only accessible to current college students. It is used to say anything about anybody. 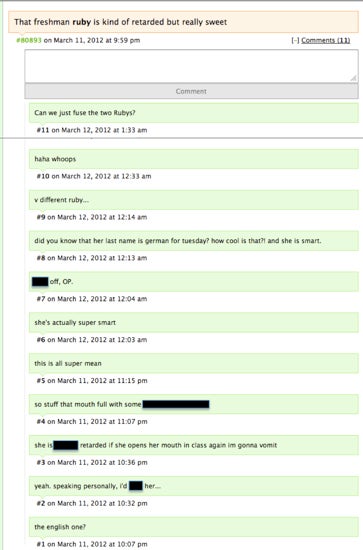 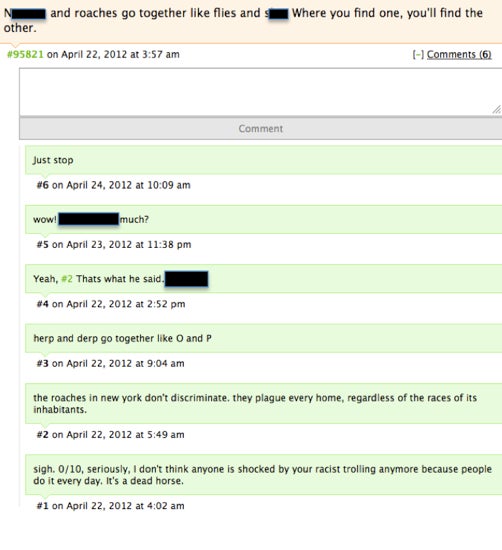 These are three screenshots, with expletives blacked out, that I took from Obie Talk this morning. The first one appeared about two months ago. I hardly ever look at Obie Talk, and I certainly never post on it. But everyone here knows about it, and there is a constant anxiety among many over what people are saying about you on there. My guess is that it is frequented by a small group of people, who use it as this forum for racism and sexism. It's a twisted kind of escapism. Someone told me they had seen a post about me, and I looked. It's quite hard to resist, sadly, when you know people are talking about you.

I think I'm a pretty stable and confident person. It didn't really hurt me to see those comments - they just seemed stupid. But the next morning, I remember walking out of my dorm and suddenly feeling so self-conscious. I couldn't stop wondering which of my classmates had written those things about me. It was that sick-awkward feeling that makes you just want to run away and hide in a little cave somewhere.

The same thing has happened to a lot of students I know. Girls, people from minority groups and first years are the common targets.

I have held off on blogging about this for several months now, because I hoped that something would be done to stop this. Nothing has changed, and the small changes proposed, which I will describe below, do nothing to address the real problem of immediate, anonymous victimisation of my fellow students and me.

I know that people have left Oberlin because of things that have been said about them on Obie Talk. The examples I've shown you are pretty mild, compared to a lot of comments out there. The insults are racist, sexist, homophobic, telling someone they are ugly or worthless, or all of the above in one. There are threats of violence and sexual abuse. Nobody would ever say these things in person - it's only under Obie Talk's cloak of anonymity that they feel they can.

I have refrained from giving examples that were addressed to specific people (apart from the one about me), because it's not my place to do so. But almost every insult on Obie Talk is aimed at a specific person. Commenters often address the victim directly, such as: 'Ruby Turok-Squire, you are...'. This is not passive aggression. This is not sensationalism. The intent is clear: to hurt someone.

Here is a student video made this year, about Obie Talk and its effects:

Here is an article written by the Oberlin Afrikana Community, responding in part to Obie Talk.

They say it all, really.

Obie Talk is run by a college junior, Will Adams-Keane, who set it up in his first year here, and seems to present himself as a crusader for free speech. He is, apparently, too busy to monitor the site fully. (Appropriate level of sympathy, please.) As a result, Adams-Keane has allowed anonymous student abuse to continue for the past three years. If this had happened at a university in England, he would have been suspended three years ago for his actions. I believe that universities should do everything in their power to allow students to feel included, accepted and safe. Bullying should never be tolerated. And here we are, at Oberlin of all places, being bullied.

Here's the front page of this week's Oberlin Review: 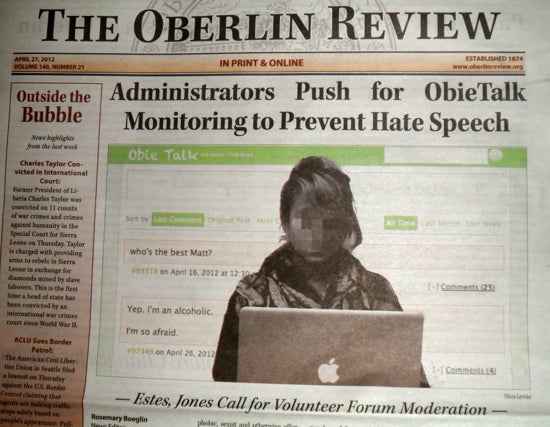 Volunteer forum moderation? Dean Eric Estes is quoted as saying, 'I don't think the administration should be monitoring Obie Talk. I think the key is empowering students to help shape acceptable discourse for themselves.' He suggests a system of 'flagging', whereby a post will be automatically removed if it gets a certain number of flags. Estes does not seem to understand that the damage of a hateful post is immediate and irreversible.

Here's a quote from the same article, from my boss, Ben Jones: 'There is always something to be learned from the expression of viewpoints, even those we may personally find repulsive.' Does he have any understanding of what it's like for someone to read that they should be 'put in the fields to pick some cotton to get your lard-ass into shape', as a recent post told a certain individual to do? Does he understand that as soon as hate speech has been published online, the damage is done? Moderation comes after the fact. All it really takes is one comment to deeply hurt someone and ruin their lives at Oberlin.

Krislov also told me that he's never been on Obie Talk. He doesn't want to know what's going on. The administration turn a blind eye and pretend that the problem has gone away.

It would be easy for Oberlin to block Obie Talk, because it is only accessible if you are using the Oberlin College WiFi network, or have an Oberlin College email address with which to log in. God forbid, they could even tell their very own student, who has been running this bully forum for three years, to shut it down!

Here's another simple solution: remove the anonymity. If this happened, students would have to take responsibility for what they said, and there would be no problem. The right to freedom of speech is only a right if you speak under your own name and take ownership of your opinions.

If racist graffiti appeared on campus, would the college remove it? Yes. Just because Obie Talk is one step detached from such immediacy does not change the nature of discrimination and does not mean that we should tolerate it when we would not in real life.

I am writing this blog because as a prospie, I would have liked to know that I was practically guaranteed to get cyber-bullied at my new university. If I had known about Obie Talk, I might well not have come to Oberlin. I believe that all students have the right to an education without oppression. It is the job of the institution to protect this right, and Oberlin is failing to do so.

Obie Talk makes me ashamed to go to Oberlin. There is no good in Obie Talk. It goes against everything that I associate with this college: inclusion, acceptance, and freedom to be who you want to be. It is Oberlin's dirty secret. But I don't see why it should be anymore, when we all know it is happening, and we all want it to stop. I speak on behalf of all of my friends here. Obie Talk must be shut down, before it destroys the free, inclusive society that Oberlin represents to so many.

If you feel strongly about this issue, please contact Dean Eric Estes (eric.estes@oberlin.edu) and our college president Marvin Krislov (marvin.krislov@oberlin.edu), to express your views. I'll make sure to keep you updated.

[Thursday, May 3rd: As a point of information, I would like to add a quote from page 57 of the Oberlin Rules and Regulations 2011-12, bottom right of page: 'Oberlin College deplores incidents of discrimination or harrassment wherever they occur - for example between students, between employees, and between students and employees. The college is especially mindful of its obligation to seek learning opportunities for its students. Discrimination or harassment, whether overt or covert, may directly or indirectly have a negative impact on students' abilities to learn. Discrimination not only may have undesirable educational and psychological consequences; it is also against the law. Perpetrators of such behavior can be subject to College adjudication processes, including disciplinary action up to and including termination, suspension, and expulsion as appropriate.'

In that context, consider this letter to the editors of the Review from Estes and Jones, in which they say: 'many thanks to Will for working with us to address this sensitive and complex situation in a fair and balanced way. We remain confident that ObieTalk can be a place that is beneficial to all students, ideally to the point that the administration can forget it even exists -- a very welcome concept to both of us.']