Isn't it amazing how 'Oberlin' can be incorporated into practically any other word?

Today, I went to class and saw Pikachu, Tinker Bell, a vampire, a king, that girl off Doctor Who, Alice in Wonderland, a zombie-clown thing, Hey Arnold, Eloise, and many, many more outfits that looked fab but I have no idea what they were.

In England, Halloween is pretty conventional. We just do the scary things. You've got limited choices: witch, ghost, devil, black cat...so you end up rotating the same few outfits, year by year, getting out that trusty witch hat or those devil horns, and that's that. My ghosty bed sheet lasted me for years. It's a low-stress fancy-dress solution. But apparently in the US, anything goes. Freedom of choice, and all that. The weirder, the merrier. I think I gave it away in the title, but guess what I was this year... 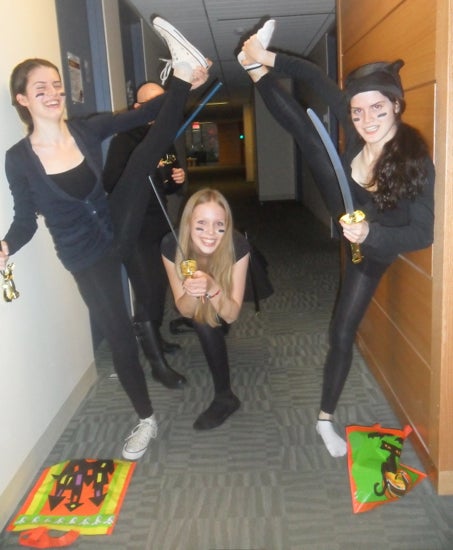 Our ninja costumes were inspired by Jackie Chan's epic Drunken Master movie, which we had discovered by total fluke one quiet night in the Oberlin College Library. See, this is why you go to college. 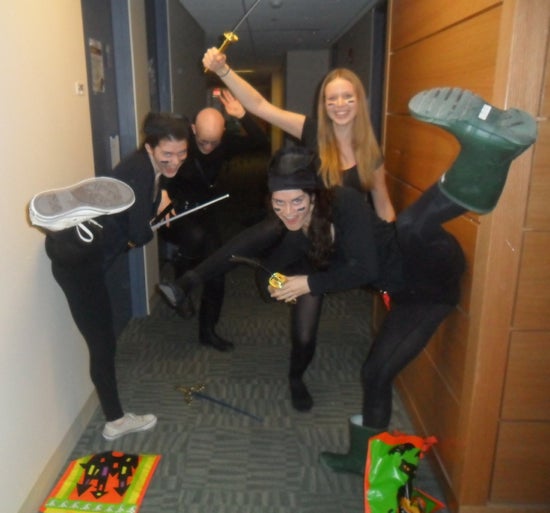 Halloween fell on the Monday right after fall break this year - the perfect day for it, because everyone's back in town but no one has much work to do yet. Or at least, we're all still putting it off. I, for one, am in major relaxation mode after a week of sleeping in, eating amazing food, and sleeping some more. Time to dress up!

At 5.30pm, we went to the awesome Ben Franklin's in town. The banner outside of this store boldly proclaims, 'We have what you need.' 99 percent of the time, it's actually true. We needed ninja swords - they had ninja swords. Black face paint? Check. How about those blacked-out face hoods that you can see out of, but no one can see in? Check. Outfit complete. 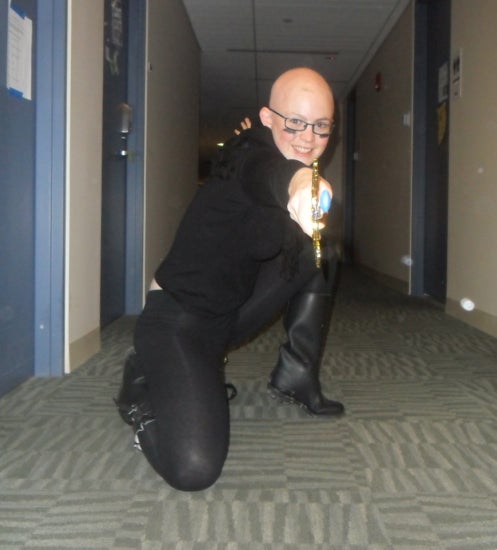 We ended up on a great street full of houses with pumpkins, struck ninja poses and stashed up on sweets. I'm easily scared and may have started screaming once or twice at some of the front-of-house Halloween displays. I was kind of hoping we'd knock on the door of one of our professors' houses by chance, but sadly they eluded us. Given that the ratio of profs:total population of Oberlin is pretty small, this was surprising. Maybe there's some secret professor Narnia where they all live?

After pulling some serious ninja moves on unsuspecting passers-by, we headed back to the dorm via the science centre. Imagine the scene: there you are, revising for the Bio test tomorrow, minding your own business, when a pack of ninjas burst into the foyer from all sides, start dodging around tables and colliding into things like hyperactive bunny rabbits, then charge back out again and are gone in a flash. It would have made my day, anyway. Yay for Halloween!

So if you, like me, hate the idea of growing up, come to Oberlin.

Full approval of your Halloween costume this year. I'm sort of lame/practical, so I tend to be concepts. One year, I was tall (I looked down at things). A few years ago, I was a panda (wore black and white with a hat with ears).

This year, I was a secret pirate (I had a hook that I pulled out at random times, but I wasn't a full time pirate). Had I seen you, we would have had a very interesting battle: ninjas being hard to pinpoint and me being a secret pirate and all.

Hmm, maybe next year I'll try being small! I'll just look up. Could be a problem if you're trying to walk anywhere though. Or a secret ninja pirate - that would be truly deadly.