When my finals ended, I went to LA to visit my brother, and then glanced across the surface of Houston for a bit before coming back to Oberlin, which by now has exchanged its fake spring for an at-times smothering summer. I'm back doing research in Professor Cruz's developmental biology lab as part of the Oberlin Summer Research Institute [OSRI], so I've been spending a considerable amount of quality time with mice, scientific journal articles, the letters GTCA, and opossums.

This will be useful somehow in the near future, although I have yet to get the site to display the actual gene sequence in base pairs. So in the meantime it just looks nice.

Most of campus has cleared out, but at the same time there are surprisingly more people staying here for the summer than I would have expected, so it's not overly quiet - enough people to eat with, play poker with, agonize over research with, and blog with. The dorms are closed for the summer, so I have officially signed my first lease, which seems like a rite-of-passage foray into adult life in which, for example, you can no longer take for granted that the kitchen will be stocked with even basic things like pepper and olive oil. Or that there will be internet. Or air conditioning, which seems insane to me, but then I'm from a very warm state.

Being in OSRI allows me to pursue an independent project (in any department; I just happen to fall in the natural sciences), but there are also classes and lectures a few times a week, covering topics from the precepts of sound research to getting what you want out of grad school. There are less cerebral events, too. Last week we visited a ropes course, and participated in various activities like getting the twenty or so of us OSRI students (and Dean Doane, of the Office of Undergraduate Research) onto one rather small plastic board:

Not us, by the way. Notice the UTexas shirts. I didn't think to bring my camera that day, so these are pilfered from the interwebs.

There was also a task where we had to pass everyone through the gaps in a net much like this one, although it was considerably closer to the ground, without disturbing the ropes too much (because the web belonged, apparently, to a fictitious but very large spider). 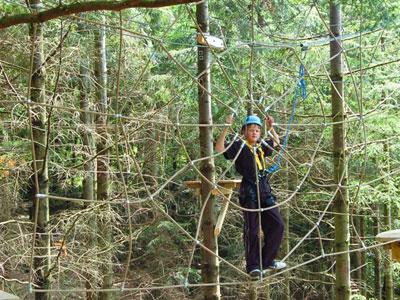 I couldn't find a picture of the cocoon, but it was a team-building activity where we boosted individual members up into the cocoon so that they could cross and all eventually end up on the other side.

Back to the research, though - perhaps the best thing about OSRI is the freedom to work on a project with the guidance of a faculty mentor but without the constraints of the normal semester (upcoming exams, meetings, classes, coursework, etc.). Just a note to rising second-years, though: you'll get a lot of emails about these programs, so don't ignore them like I did! I was rather clueless until my advisor told me in person about it, and so when I started to get my application together, the priority deadline had passed, but I was lucky enough to get an extension.