Yesterday I went to a panel discussion set up by the school on short notice to discuss the history, politics, and ethics of student protest. The panel convened in response to the mostly troubling experiences of the thirty or more Oberlin students who went to Pittsburgh a few weeks ago to peacefully protest the G20 summit. By the time the dust settled, three Oberlin students had been arrested, one of whom faces a felony riot charge for dancing in the street with a cow suit on.

The Guardian's website caught a great picture of him: 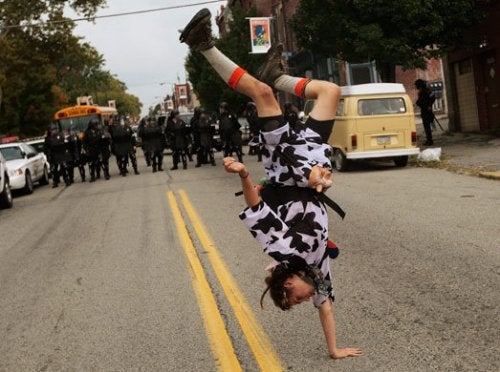 Though I myself was not arrested, I was one of the protesters, one of the witnesses to the reality of modern, large scale American protesting. I think I speak for all of us when I say we all witnessed some level of police violence -- whether tear gas, mass arrests, or the firing of rubber bullets -- that seemed to go beyond what the situation called for.

Yesterday's panel, attended by at least a hundred students, called together four professors to provide greater context to what happened in Pittsburgh. Perspectives were provided by Pam Brooks, of African-American Studies; Harry Hirsch, of Politics; Timothy Hall, of Philosophy; and Ronald Kahn, also from the Politics department.

Professor Pam Brooks started off the discussion with some discussion of the history of suppression and rebellion in this country. She pointed out that the G20 protests, like others throughout history, were about economics, but also about the humanity of the working classes. She also read from famous liberation texts, including this powerful quote from black abolitionist Frederick Douglass: "Find out what people will quietly submit to, and you have found the exact measure of injustice and wrong which will be imposed on them, and these will continue till they are resisted with either words or blows. The limits of tyrants are prescribed by the endurance of those whom they oppress."

I was most impressed by the commentary of Professor Harry Hirsch, who teaches a class on the First Amendment. He started by pointing out that our nation was founded on acts of protest and civil disobedience -- acts that were violent and illegal at the time but which we now celebrate as patriotic. He also noted that one of the official justifications the police gave for suppressing peaceful protesters and onlookers was that they might soon cause disruptions. But "the argument of potential is a weapon of repression," he said, and it amounts to the same excuse the government gave when it interned Japanese-Americans during World War II and conducted Communist witch hunts during the Cold War.

Hirsch also criticized the University of Pittsburgh for taking punitive action against some of its students who were arrested in the melee, most of whom were peaceful onlookers or demonstrators. He noted that throughout history universities have been known and appreciated for their unique value as havens of protest. Attempts to suppress this free speech never ends well, he said, pointing to then-Governor Ronald Reagan's repression of UC Berkeley's 1965 Free Speech Movement leading to greater national awareness and support for the student movement. The Kent State shootings also came to mind. "Democracy is not always decorous or polite," Hirsch concluded. "It can sometimes be a contact sport, as we're seeing right now."

Besides the protests and police response, another factor came into play in the aftermath of the G20 protests -- the quality (or lack thereof) of media coverage. Remarkably enough, I myself ended up being portrayed in two very different ways by the mainstream media, an experience that, to me, represents a microcosm of the inconsistencies inherent to journalism.

I went to the protests as both a protester and as a reporter for the Oberlin Review (weird conflict of interest, I know, but as seriously as I take my role at the newspaper I can't let it restrain me from pursuing my other interests. It's not like I'm working for the New York Times here). I kept a running Twitter feed on www.oberlinreview.org, the first time we've had more than weekly updates on our site (sad, I know). I also contributed a G20 photo essay to that week's issue.

So when a BBC reporter asked if he could interview me, I was only happy to oblige. Maybe I'd pick up some lessons on professional journalism from being on the other side of the reporting. Worst-case scenario, nothing would come of it; best-case, I'd look like a cool protester for the whole world to see. Boy, was I wrong.

To make a long story short, I was misquoted and portrayed as an anarchist by the BBC. So I did what any wronged, but ultimately powerless person would do -- wrote a letter to the editor. I complained about the story's patronizing headline claiming that the protesters "lacked focus," and wrote that what I really said about Native Americans is that we're corrupting the world's indigenous cultures with the spread of capitalism the way we once did to the natives of our country. Of course the letter never appeared (as far as I know), and I never got any acknowledgment or apology from the BBC.

But on a lighter note, that same afternoon an MSNBC photographer caught some friends and me in a rare moment of congeniality with a policeman. (I'm the guy on the left eating a sandwich.)

We had struck up a conversation with him after he complimented one of my friends on her costume. It was disarmingly refreshing coming the day after a cop told me he "should blast me in the face" for trying to walk past him to get to the House of Kabob at the end of the street. Seriously.

Anyway, Friendly Cop told us he supported our right to protest peacefully and just wanted us to understand how stressful the job was for him and his colleagues. We did understand.