It's been a while since I've posted. My excuse, aside from the perennial "I was busy" one, is that I was sick. I'm getting better now, but I thought I'd take the opportunity to write about what it's like being under the weather at college. I've also taken the opportunity to include a few funny pictures I drew.

I am fortunate in that I rarely get seriously sick. I've never actually been so bad that I had to miss a class since I came here. Oberlin has resources for people who this happens to--there's a student health center, for instance, where I got checked for strep throat last year when I lost my voice. However, my sicknesses tend to require only a cold care kit. Those are available at the student union building and they're actually quite helpful for those of us whose sicknesses are of the lingering runny-nose-and-total-exhaustion variety--just bad enough to take the fun out of things.

I felt this one coming on and decided to nip it in the bud, getting lots of sleep and testing how much vitamin C the human body can stand. You see, there is a store/restaurant on campus called DeCafe, referred to as DeCaf (DAY-calf), where one can spend one's flex points (meal plans are made up of meals and flex points). While it's most famous for the sandwiches and smoothies you can get custom-made there, they've got lots of snack food, cereal, dried fruit, beverages, ice cream, energy bars, bread, yogurt, instant meals, etc. They also stock Naked juices, many of which are fortified with lots and lots of vitamin C. I hadn't spent many of my flex points since smoothie season ended. In that almost-sick week, I spent at least twenty-five dollars on these. As a result, for at least a week, I was consuming between 750% and 2,000% of the Daily Recommended Value of vitamin C in a delicious battle against illness.

But--impossible as it may sound--I still got sick. I spent almost two weeks with a nasty head cold. Then, miraculously, it seemed to be gone--I seemed to be returning to my regular self. I stayed up to three in the morning Friday night talking to friends and playing cards. At last, all was well!

Monday morning I woke up with a sore throat. It soon became evident that my cold had not left; it had merely regrouped and attacked again lower down, moving into my chest. That wasn't fun. By Wednesday morning, it was clear that love and herbal tea was not going to make this go away--my throat was getting raw with coughing. After my morning class, I said, "Screw this" and bought cough suppressants. 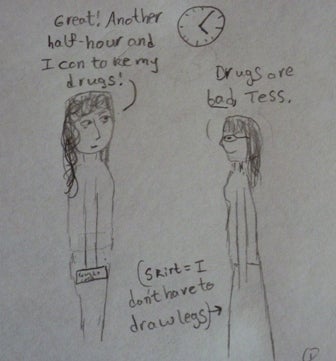 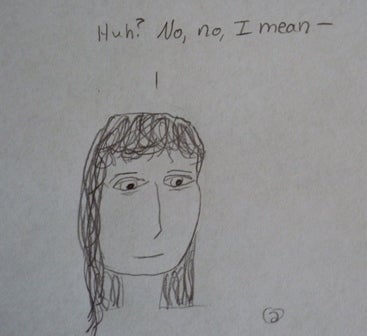 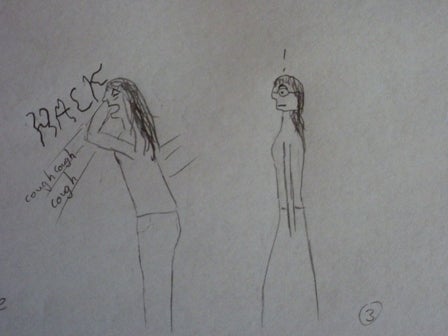 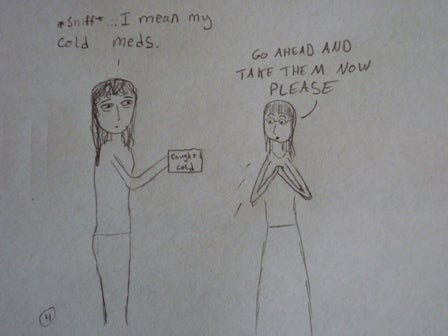 As the week went on, I grew increasingly weary. I enjoyed Friday's movie night--Scott Pilgrim vs. The World--but then went to bed early, hoping that I would wake up with all my usual vim and vigor restored. I was sick and tired of being sick and tired.

In fact, Saturday turned out to be the nadir of my health dip. I didn't feel ill, exactly, just germy and really, really tired. (Also extremely sensitive to the humidity in different buildings.) I felt utterly unambitious, which is, for me, just this side of zombified. However, when I looked in the mirror, I appeared to be quite put-together and on top of things. 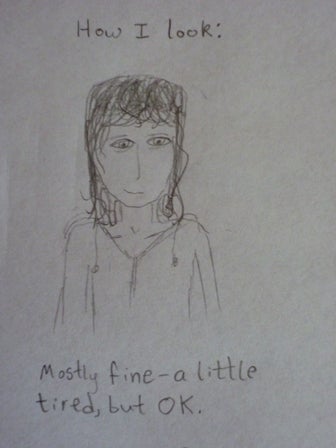 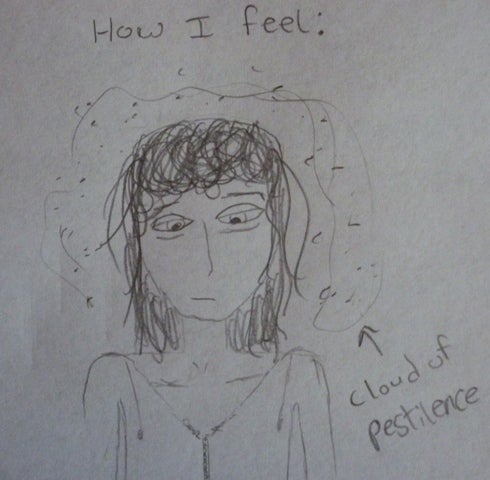 I did, in fact, have the energy to do my homework--it was mostly reading--but I didn't really want to do more than the minimal requirements. I was feeling unproductive and lackluster, without the drive to work seriously. I wanted something funny, something that would make me think and feel successful, but without very high stakes. Fortunately, there was a perfect solution at hand: lawyer video games! (First mentioned in this blog as something Guy recommended to me. This post refers to the second game in the series.) 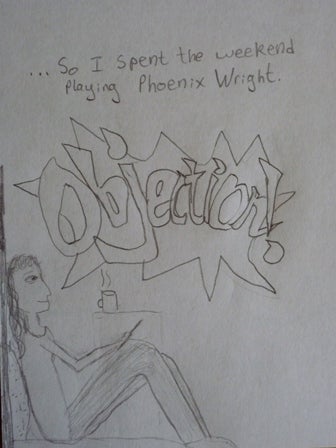 I spent much of the weekend as a defense attorney, alternately growling at and applauding the prosecutors, cross-examining reluctant witnesses, and (out of character) squee-ing at story twists and character development. The games are clever, both in terms of trickiness and in terms of humor. I would probably have spent most of the weekend playing the game anyway, since Guy needed his DS back, but it was perfect for my energy level.

I beat the last case Monday morning, by which time I was feeling quite a bit better--no more aura of pestilence. I texted Guy with my progress periodically. I swept into lunch triumphantly, returned the game, and commenced gushing.

I like the "cloud of pestilence." Tess, your drawings have improved!

Hee hee. Thanks, Dad! :) It's the graphic narrative class, I think--I've had a lot more practice and I've been actually *looking at* how things are drawn. Some of my friends have been giving me tips, too.

Oh boy do I identify with this - guess who has strep throat right now? I must say, it's not the spring break I'd envisioned.

Your cloud of pestilence describes my woozy head every time I get sick.