You can't come to Oberlin without learning. Of course, Oberlin has some pretty amazing classes—the history of English! Adolescent development! Graphic narrative! ExCos!—but that's not what I mean. Being here, you absorb the ambient knowledge of the place (best places to go for a walk or to study, shortest routes between buildings), develop survival skills (Lord/Saunders food > Stevenson food > Dascomb food, co-op food is usually better than all three but depends on who's cooking and how much you like potatoes), pick up on whatever your friends are studying (an evolutionary arms race involving duck penises), take in what your friends are interested in (Doctor Who, knitting), and learn to look after yourself (laundry good, all-nighters bad). One of these latter skills is how to manage money.

Looking at the category, I realize I'm practically the only one who blogs about paying for Oberlin. I'm not sure why that is, considering that nearly everyone I know has a job of some kind and I'm certain practically everyone here is taking out loans. On the other hand, I remember learning in a sociology class that Americans are more comfortable talking about their sex lives than their finances, so maybe that plays into it somewhere.

As for me, I'm reasonably comfortable talking about my finances—especially in the abstract—so that's what I'm going to do.

In college, handling money is fairly easy: you don't have any! Or rather, you have to earn it, but you really only have one bill, an enormous one that covers nearly all your needs (food, housing, what you're doing with your life) and absorbs nearly all your cash. In short: all your money belongs to Oberlin (or whatever college you're going to), and when you accept this fact, you will be happy. You wanted to go to this college more than you want a new iPod, after all, right?

I know some families have worked things out differently from mine. I have friends whose parents say they can keep the money they make from working during the school year, so long as the money from a summer job gets turned over. Some people's parents only expect them to be able to pay for books. I know people whose parents say they can keep all the money they make, counting their loans as a sufficient contribution. Heck, I even know some people who don't even have a job, though I don't know how they pay for Christmas presents and things like that.

But for my family, the FAFSA's Expected Family Contribution means just that--a family effort. While it might be technically possible for my parents to pay it all on their own, it would be tough, not to mention unfair. The way I see it, it's my responsibility to pay for my education as much as I can. Besides, it makes it at least a little bit easier on my parents to have me lightening the pressure with scholarships, loans, and my own earnings. Sending a kid to college is going to require tighter budgeting at home in any case, but as much as I can relieve that, I do. I've been able to put over at least $1,500 a semester toward the tuition bill, plus paying for my own books, and it clearly hasn't hurt my grades or my ability to take ExCos or engage in Nerf warfare or anything like that.

Now, I don't exactly "budget" in the normal sense of the word, allowing myself a set amount for certain categories of spending. I don't know how much I'll make in a given semester; I can ballpark it, but some weeks I might not have time to blog, some days I might pick up an extra shift lifeguarding, and so on. So budgeting in the traditional manner is somewhat impractical.

When I was but a wee freshperson, going off to college, I recognized this, and promptly made the arbitrary (and perhaps unrealistic) decision that 90% of all the money I made would go right back to Oberlin, and I would pay for soap and laundry and birthday presents and so on out of the remaining 10%. I kept very scrupulous track of the hours I worked for a semester, made an estimate at how much would be taken out of my paycheck in taxes, and kept track of things down to the last penny (rounding down) in a series of scribbles on the back of a receipt. At some point--either fall break or winter break--this came up, and I proudly reported that, after buying Christmas presents and a bottle of cleaning spray for Barnard's seriously disgusting kitchen, I still had $76.53! But that wouldn't cover textbooks, so perhaps I could tap the money I'd set aside for tuition for that and work extra lifeguard shifts to make that up . . .

Mom looked at the scribble on the back of the receipt and told me that, really, I didn't have to be quite that precise. Ninety percent was a good goal, she told me, but maybe a bit high. It might be simpler to just play things by ear: to work hard, pay for my books for the next semester, and turn over as much money as I could spare as each term bill came due. And buying dish soap, she assured me, was not a huge indulgence. This made sense, so I relaxed a bit, and stopped keeping track so closely. It also turned out that tax was already withheld from my paycheck, so I had more money than I thought. All in all, it just seemed easier to work, spend rarely, and check my bank account every now and then.

That was how I progressed for the next year and a half, without incident—earning money, buying textbooks, giving Oberlin money, occasionally going out to eat or getting myself a new book or a poster as a special treat. At the beginning of my junior year, though, I decided that I wanted to know exactly where my money was going. How much was I spending on what? Was I living up to my initial, largely-clueless goal?

So, in mid-September, I made a very simple Excel spreadsheet. There are columns for my existing balance and the in- or outflow of money. The other columns are all paired—one being for the amount put in or taken out, the other for a written description of it. For income it's "Amount" and "Source." For expenditures, there are four categories.

"School/Necessities" is actually a bit broader than "money that goes to Oberlin." It covers tuition payments, but also textbook purchases; toiletries; laundry detergent; airfare; sneakers, sandals, and snowboots; necessary clothing, like replacements for worn-out jeans; and, over the summer, food.

"Personal" involves treats just for me: ice cream from Cowhaus Creamery; books; movies; the tickets to Cirque du Soleil; unnecessary clothing, like Woot! t-shirts, a fuzzy robe, and Halloween costume components; photo prints; and going out to eat. Most of it is probably going out to eat. I did more of that junior year than I had in the past—still less than once a week, of course, but more than once a month. It's one of the things I find it more acceptable to splurge on, because it's an experience rather than an object, it's usually done with friends, and it's not something I can replicate on my own.

"Friends" is any money spent on friends or family, mostly Christmas or birthday presents, although it also covers half the tab when I treat someone to ice cream or coffee.

"Donations" is the smallest category. It's any money I donate to charities. Mostly it's to the World Food Programme, although political donations would also come under this category.

I know enough about Excel to make it do simple tasks like calculating the sum of a column. I have a cell that gives the total for each of the four expenditure columns. I also have a cell that keeps track of how much money I've spent total. With those, I can create four more cells that give me percentages--how much of my total monetary outlay goes to each of these categories. I think this is kind of fun, since I'm a nerd.

Currently, this is how my finances stand: 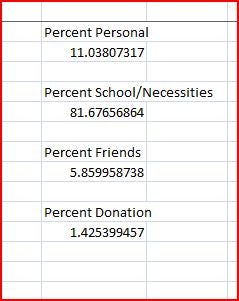 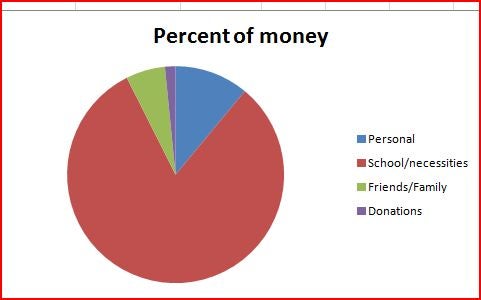 This isn't bad, but I'm only spending 81% of my money on school and other necessities. Remember, though, that this began in mid-September, so it covers two semesters but not the tuition expenses for one of them. (It does cover the outlay for the coming semester, but that's less than I spent last summer, since my research job this summer was less lucrative than nannying last summer was.) Anyway, let's see what happens when I plug in my outlay for Fall 2011: tuition, books, and airfare. 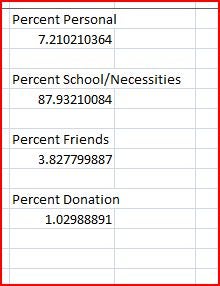 That's far more respectable, almost up to my shot-in-the-dark idealistic first-year goal, and I'm rather proud of it. It's important to remember, though, that this spreadsheet only covers things that pass through a bank—it's easier to double-check that way. Quite a bit of the money I use during any given semester is cash. I get it by selling textbooks on the Oberlin Classifieds and spend it locally. The Farmer's Market only accepts cash; Gibson's doesn't accept cards, and, as I don't have a checkbook, I have to use cash there. Most of this is probably spent on personal things, although a fair amount goes to necessities as well (cold medicine, soap, tissues, etc.). So there's some wiggle-room on these percentages. I probably spend somewhere between eighty-one and eighty-five percent of my money on necessities.

In any case, I think that 81%-ish on necessities isn't too bad. What bothers me about this is that I'm spending more on myself (11%) than on friends/family and donations combined (7%). Looks like I'm going to have to cut back on eating out this coming year.

If you're a prospie reading this and you have any questions about how to spend money (or avoid spending it; Oberlin has lots of ways to help students do things cheaply or for free), please leave a comment and ask! If you're as nerdy as I am and want a blank copy of the Excel spreadsheet, I can e-mail it to you, too.

If you're a current student or an alum with different budgeting suggestions, please leave a comment and share. Or if you'd like to talk about different ways of dividing up the responsibility for paying for college, by all means, do. As I said above, I seem to be the only one writing about this, and I don't want to dominate the conversation, because I'm sure that paying for Oberlin is something all students (and parents) think about.

I welcome your thoughts!