At the moment I'm working on my final paper for my literary theory class, which has led me to look through my notebook in hope of finding some forgotten pearls of wisdom. I'm not actually a big note taker and I never come close to filling a notebook. I use them only because I am physically incapable of not ripping looseleaf out of binders. In flipping through the section of my five-subject notebook devoted to literary theory, however, I realized something - for the first time in my life I have used up every page. That probably has a lot to do with my professor, Pat Day. Pat is an Oberlin grad (class of 1971); a professor of English, Cinema Studies, and Comparative Literature; and one of those wonderful people who seems to know at least a little bit about everything, or at least everything within his discipline(s). In addition to being incredibly knowledgeable, he's also very funny, which helped me to return to one of my most beloved practices from high school and my first two years at Oberlin, titling my class notes with professor quotes.

I know this doesn't seem very practical. If someone were to look through my notebook in hopes of finding my notes on our discussion of "The Death of the Author," they would probably have a hard time finding them since my notes from class that day are titled "...put these chemicals together and you get the Magic Flute" rather than something intuitive like "Barthes, Death of the Author." I'm ok with that, though, because I'm the only one who ever looks at my notes and I don't have a problem with my system. Plus, it makes going back to my notebook to study or refresh my understanding a bit funnier. So in the spirit of making studying funny, I've decided to share some of my favorite note titles with you, spanning the entire semester and about 200 years of literary criticism.

September 15 - "The snootiest line in all of criticism."


I'm ashamed to admit that I don't actually remember what the snootiest line in all of criticism is, but I'm almost positive it's by T.S. Eliot. I'll report back if I remember.

BONUS QUOTE: "In the beginning there was nothing, and then there was Bill Wordsworth."


This gem came from one of Pat's many hilarious and informative tangents during this course. On this particular day we were supposed to be discussing "Structuralism and Literature" by Girard Gennette. Instead we ended up talking about how one could argue that Beowulf and the Harry Potter series tell the same story depending on one's theoretical approach. Take it away, notes (apologies in advance for my scrawl): 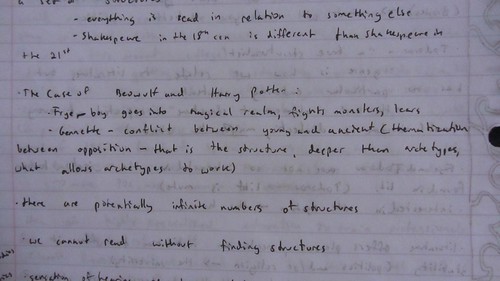 
Are you sensing a trend?

October 8 - "Come be part of my giant cross-America Fish Tank!"


Stanley Fish is a post-modern theorist who's one of the main proponents of reader-response criticism, which is a school of thought that focuses on the reader's experience of a literary work. Until the early 90s Fish was one of the most respected public intellectuals in America, and as such he basically had a posse of followers aka professors and students who agreed with his ideas. They were called, and I swear I'm not making this up, the Fish Tank. Hopefully I'm not the only one who thinks this is ridiculous.

October 31- "When Derrida gives a talk to he just wants to confuse his audience, sort of like when you do weird things to your cat."


According to Pat, Derrida once said about his writing that he was trying to get to the place where he didn't know where he was going. Job well done, Jacques.

November 3 - "We went to see The House Bunny with Anna Farris. A more baffled group of English majors you have never seen."

November 17 - "...and then everybody will be happy and ruled by the King of Prussia."

December 3 - "They're coming. There will be clone wars."


This obviously isn't funny, but it really made me think critically about the television I watch. Literally every drama I watch or have watched regularly in the last few years (Mad Men, The Walking Dead, Downton Abbey, Buffy the Vampire Slayer, The West Wing, Wallander, etc.) has featured gendered violence against women in a major plot arc. That's pretty chilling. Based on this off-hand comment alone, I wish I had been able to take a cinema studies class with Pat while at Oberlin.

December 8 - "The world as you know it is a fiction, but you still live there."


Ok this is technically not a direct quote from Pat, but it comes from a story Pat told in class about when he met Edward Said (major public intellectual, author of Orientalism) and was introduced to him as Oberlin's "theory person," which he thought was strange because it made him seem like "some sort of science fiction pterodactyl." Apparently Edward Said thought it was strange too.

I hope that these were funny to someone that's not me and that, at the very least, this post provided a few minutes of sweet, sweet procrastination. Happy finals and happy holidays, everyone!