Fall Break. It is a bastion of hope, a much-needed escape from the stress of schoolwork. College students have to keep up with a lot of work, and as a freshman, I've only seen the tip of that iceberg. During midterms week, there was an eerie silence in my dorm. I had so much to do that my anxiety flared up uncontrollably almost every day of the week. I had made the mistake of signing up for an in-class presentation during midterms week, which included a write-up as well. Also on that week, I had an in-class exam and two papers due.

In taking on a college education, students sign up to be challenged. Not only is there much more material than in high school (whether you took standard level classes, AP, IB, or were homeschooled), but the content requires a higher level of dedication, analysis, and critical thinking to perform well. Living in a dorm, surrounded by people to socialize with, makes doing work even harder. Why write a paper when you can play a round of Smash or watch a showing of Battlestar Galactica?

I am easily won over by distractions. I knew that midterms week wouldn't be easy. How did I cope? I shut myself in my room and spent hours at a time doing work, with short breaks for meals, talking to friends, or watching some Netflix. I don't know how long it took me to get everything done, but I can affirm that I survived, and everything worked out fine. My dire doomsday predictions did not come true.

This blog post, however, is not about academics. It's about Fall Break. And what a Fall Break I had.

When making my travel plans in September, I discovered that my boyfriend Jonny Quirke and his roommate Eric Spoerl were also going to the Philadelphia area (my home) to visit Eric's girlfriend Melissa. Jonny asked if he might spend the week at my house, and my family was down, so that was that. We looked at plane tickets, though, and were dismayed at the prices. Eric suggested we look at Amtrak instead, which was a much more affordable option. We all bought train tickets together, after I had finished being excited about the double-decker train (I had never heard of such a thing).

Our train was scheduled to leave Elyria's train station at 1:15 AM on Friday night (or Saturday morning, however you prefer). We got a ride to the train station at about 12:45. Eric had packed the day before, I had packed that afternoon, and Jonny finished packing about an hour before we left. When we got there, the station was almost completely empty. Now, "station" is a relative word. Elyria's train station is composed of a small roof with glass walls that do not touch the ground, a bench, and a couple chairs. The three of us trekked up to the tiny structure, set our bags down, and waited.

In the car ride over, I'd received a text alert that the train was now coming at 3:37 AM. The text also noted that trains can "make up or lose time." I was sure that Amtrak was just being cautious; there was no way that the train was delayed by a full 2.5 hours, right? So when a train's lights came around the bend at around 1:20 AM, I picked up my bag and stood outside, ready to be picked up.

The train didn't even slow down. It was a freight train.

I sat back down with Jonny, who gently reminded me that he had told me so. Eric checked the arrival time on his phone at the half hour mark, and apparently we'd been delayed another five minutes. Then, it started to rain.

Since I had goofed up and forgotten to wear a real jacket, Jonny lent me his extra one, and I bundled up in the extra layer, which was much too large for my tiny-ass bod. We waited, and waited, and waited some more. 2 AM rolled around. Neither Eric nor Jonny was very happy about the situation, and I took these pictures in which they dramatized their disappointment. Eric pouts, and Jonny rejects the entire notion of existence in such a miserable situation. We got to talking with another Oberlin student in the overhang, a Conservatory student named Jake Flaschen. We talked about Magic: The Gathering and chess, but mostly about the possible reasons for the massive delay. Eric updated us with yet another message from the Amtrak app. The train was to come at 3:45 AM. So we kept waiting.

3:45 AM came and went. No train. At 3:55 AM, I was beginning to lose hope when suddenly, another train came around the bend. And this one was slowing down! It was our ticket out of the scary Elyria train station, and one step closer to home. We loaded onto the train and I passed out as soon as I got in my seat.

I woke up a few hours later, around twenty minutes before we were scheduled to stop in Pittsburgh and take our connecting train to Philadelphia. The train to Philly was supposed to have waited for us in Pittsburgh, but there was an announcement by the conductor that instructed Philadelphia-bound passengers to stay on the train. Apparently, the train had left without us. We were heading to DC instead.

Eric, Jonny and I spent the day in the observation car, playing Smash Up and talking about all sorts of fun topics, like pastoral imagery and the security-freedom dichotomy. Many hours later, at around 5 PM, we reached DC. Trains leave from DC to Philly every hour at the twenty-minute mark. We expected to have to wait until 6:20 to go to Philadelphia, but Eric led us through the terminal efficiently enough that we made it onto the train by 5:10. We were homebound.

I got home around 8 PM that night, and was asleep within minutes of getting in my bed (my bed!!). Jonny and I had a great week; we went to visit Eric and Melissa several times, there was a Renaissance Faire, we went to the comic store, and we even got to eat twice at one of my favorite places.

Of course, there was a slight hiccup when Jonny discovered his allergy to shellfish, and we had to take him to the emergency room at 7:30 PM. They have a policy of holding patients who receive adrenaline injections for four hours. Eric and Melissa came to hang out with us until 11:30, and then we went to one of my favorite 24-hour diners. That night really illustrated the relationship my mother and I have to stress; we were absolutely off our rockers at the hospital, while Jonny was very calm despite his inability to speak for most of it.

All in all, though, Fall Break was a much-needed period of respite from a very stressful time. We had plenty of adventures, and I look forward to the next time I get to have a weird experience traveling.

Regarding the title of this post: "Never Trust a Train" is not a real piece of advice; I much preferred traveling by train than by plane, and I would highly recommend it. I just also would like to warn all travelers that especially in Ohio, where there is very dense movement of freight, passenger trains will be delayed. 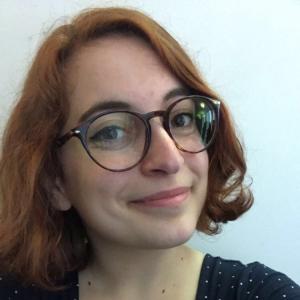