I got a phone call three minutes before my math class ended this morning from a photographic cohort, Gary. Being the wonderful student that I am, I didn't answer, but listened to my voicemail immediately following class. Gary had another obligation scheduled for noon, and couldn't make it to some event that I couldn't really discern from the message. Wednesday afternoons are my only free ones during the week, so to save a fellow photog, I called him back.

He told that there was something involving bells and a band (not Like Bells, sadly, though they have a show this weekend at the 'Sco :D) and Fairchild Chapel at noon. Seeing as it was 11:57am, I booked it (or at least booked it as quickly I could with a backpack and a ton of video equipment I had to return to the media depot) to Fairchild Chapel.

When I got to Fairchild Chapel, it was noon... and there was no one there. I stood there for about a minute, trying to look like I know what's going on and failing miserably, when I heard the bells of Finney Chapel ring. Finney Chapel is one of my favorite locations on campus; it's a huge chapel designed by Cass Gilbert (who also designed the Allen Art Museum, Fairchild Chapel, and a few other buildings on campus in a classic Mediterranean Romanesque architecture style) that doesn't sport any religious symbols. It's a gorgeous building, one of the visuals that represents Oberlin College, and rightly so. Today, it stood out even more. The Finney bells usually don't ring the hour, and today, it was. Well, that's different, I thought, and headed toward the anomaly.

There was a crowd of four people outside Finney, but I saw some people entering the building too, and followed them. As I entered, the bells stopped ringing, and I was convinced I had just missed the whole reason for the photoshoot, and right on cue, President Krislov and VP of Communications Ben Jones began to exit the building.

I must have had a distressed "oh God, I showed up late to an event I was supposed to photograph and the president of the college was in attendance and this is a big deal and now there will no photos and I failed at today and being a photographer and..." that Ben understood immediately and reassured me that the fun was about to begin, so I ran up the steps to the balcony.

There were instrument cases and coats lining the landing, and I could see the partial legs of someone disappearing up a ladder to an unknown upper level of the chapel, and a queue of four people awaiting to go up. I dropped all my things, slung my camera over my shoulder, and joined them.

At this point, I still have NO IDEA what I'm about to photograph. For real. I go to interesting places and events on recommendation and on assignment often, usually not knowing what kind of fascinating experience I'm going to encounter, and I haven't been misled yet. I was ready for pretty much anything.

Finally, I was on the steep steps headed up. The steps turned to a ladder, and then I was up. I was in the bell tower of Finney Chapel, with a 360 degree view of the campus I love so very much. I didn't think it could be more beautiful than what I see on a regular basis, but it was. It was sunny and 40 degrees and it was a gorgeous day.

As soon as I turned my view inside the tower, I realized I was surrounded by old gorgeous bells and... a trumpet choir. They set up stands and music, and began playing a fanfare that wafted over campus with the breeze for about five minutes. It was incredible.

As the students were packing up instruments and music, I learned that this fanfare marked the moment at which Oberlin College began classroom instruction, 175 years ago today, at noon, on December 3rd, 1833. I also learned that for many years, musicians would perform in the tower on May Day, but it hasn't happened in a very long time. It's the kind of tradition I would love to see return.

I didn't think I'd ever get another opportunity like this, so I wanted to be the last to leave the tower. I took a few shots of the bells, of campus, of the students headed down the ladder. A different perspective. I live for this. 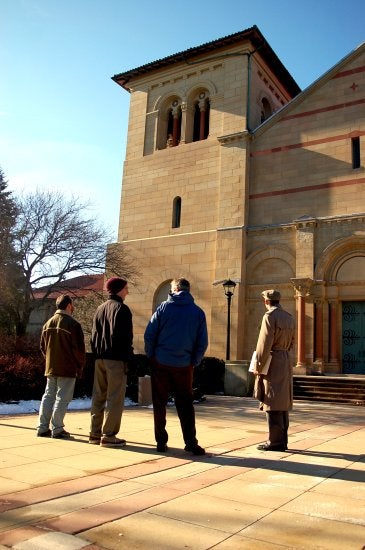 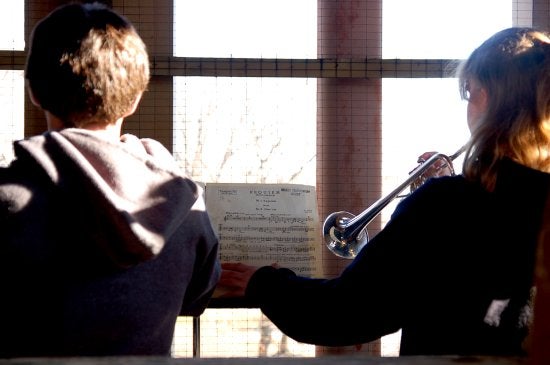 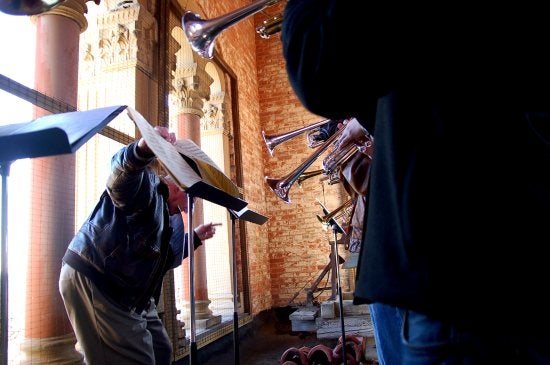 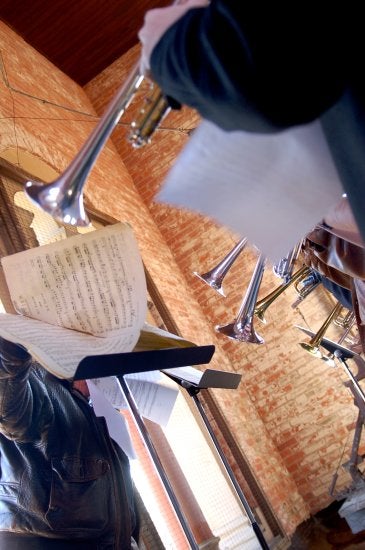 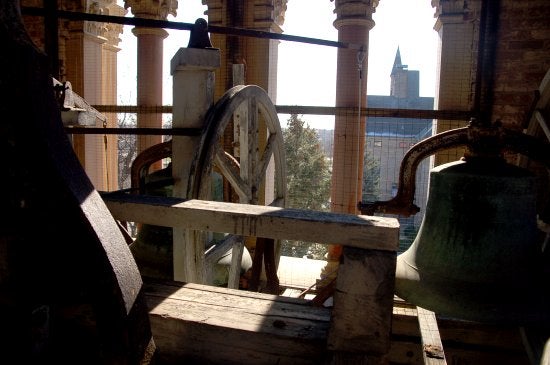 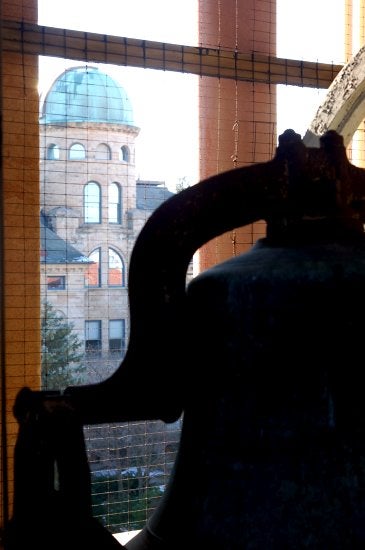 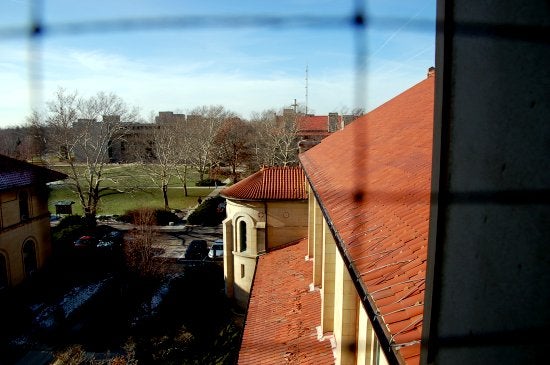